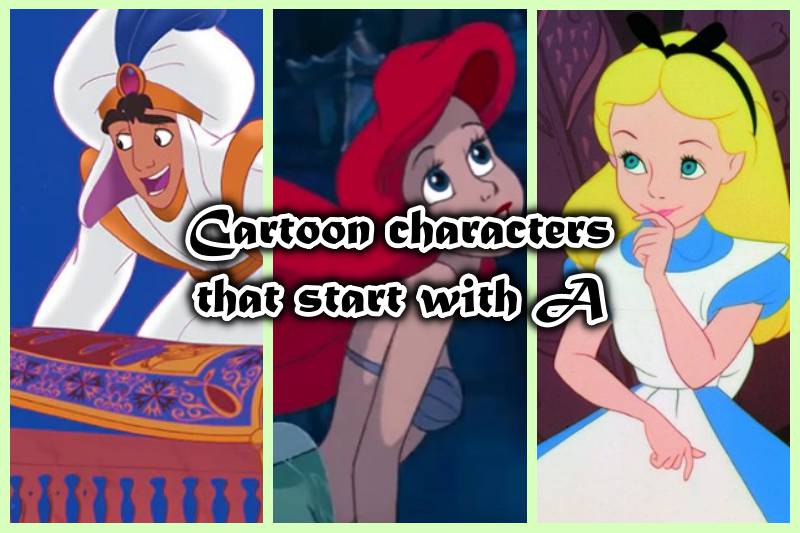 This article details the best cartoon characters whose names start with A. The cartoons that we all watched in our childhoods and the journeys that these characters have been through have had a deep impact on us. Surely, we’ve all dreamt of having such wild, bizarre, and fun adventures!

To reminisce on some of our favorite characters, here we have the top 10 best cartoon characters whose names start with an A!

Best Cartoon Characters Whose Names Start With A

One of the best cartoon characters that start with A is Aladdin. Aladdin is the main protagonist of the film and is a petty thief in the city of Agrabah. Despite being destitute and made to feel worthless his entire life, he always remained hopeful. He’s selfless and has a warm personality.

In spite of all the hardships he faced, he managed to turn things around for himself, owing to his optimistic and pleasant nature. After coming across a magic lamp and a wish-granting genie, he embarked on several adventures before finally winning the heart of Princess Jasmine.

Ariel is the main character of the Disney animated film, The Little Mermaid. She is the seventh and youngest daughter of the rulers of the ocean, King Triton and Queen Athena. Ariel has big, green eyes and long red hair, and a seafoam green tail.

She is a young, jovial mermaid who is very curious about the human world. She’s tired of her life in the ocean and believes there is more the world has to offer to her. She dreams of someday living on land and interacting with people – a dream that takes her on an incredible journey!

Alive is the titular protagonist of Disney’s animated film Alice in the Wonderland. She has long blonde hair, blue eyes, and a slender figure. She’s young, naïve, and has a vivid imagination that she seeks solace in.

Her curious nature and constant need for adventure are what end up pulling her down the rabbit hole to Wonderland in the first place.

Through the course of her adventures in Wonderland, Alice begins to realize how much she misses her mundane life and gains a newfound appreciation for the ordinary.

Alfredo Linguini is one of the main characters in Ratatouille. At the beginning of the film, Linguini is shy, clumsy, and very unsure of himself. He’s also lost several jobs due to his clumsiness. Linguini has low self-esteem as no one in his life has ever had any expectations from him.

At heart, Linguini is a kind and caring person and wants to be good at what he does. Throughout the movie, Linguini gains a friend in Remi. Although he is distrustful of the rat at first, he forms a strong bond with him and learns a lot along the way.

Alex is one of the primary protagonists of the DreamWorks franchise Madagascar. The loud and energetic lion has golden brown fur and a glossy, silky mane.

Alex has the personality of a celebrity and always wants to be the center of attention. He is vain, self-absorbed, and sometimes comes off as inconsiderate of others, but he is always there for his friends when they need him.

Anastasia, the main protagonist of the film, is a beautiful young woman looking for her family and her place in the world. She’s the last surviving child of the Russian Royal Family – a fact that remains unknown to her until she meets two men who convince her to meet the Dowager Empress, her grandmother.

Along the way, she learns how to talk and act like a Princess and is haunted by the undead Rasputin and his minions, who’s mission is to destroy the Royals once and for all!

Arlo is the lovable protagonist of The Good Dinosaur. The young Apatosaurus is the last to hatch among his siblings and is the youngest in a family of five.

He is light green in colour with amber eyes. At first, his most noticeable trait was his cowardice and how fearful he was of the world around him.

Over the course of the film, he changes drastically and grows to be bold and brave with the help of his human companion, Spot. Arlo faces many of his fears and finally gets back to his family that he was separated from.

Alberto Scorfano is one the main characters in the animated feature film, Luca. Alberto is a 14-year-old sea monster who is fond of the human world.

In human form, he is slender and tan, with bright green eyes and curly golden-brown hair. In sea monster form, Alberto has periwinkle scales and purple hair.

The young sea monster prides himself on his extensive knowledge of the human world. Alberto is expressive and enthusiastic, and he rarely takes things seriously.

owever, by the end of the film, he does become more considerate and he is a great friend to Luca, helping him escape Portorosso and also win the famous Portorosso Cup.

13-year-old Abby Park is one of the main characters in Disney Pixar’s, Turning Red. She is a short, Korean-Canadian teenager with long, straight black hair and brown eyes.

Abby also has the tendency to get aggressive and has a short temper. She may not be the brightest of among her peers and has a shoddy memory, but she makes up for with how kind and loyal she is.

Cartoon: Alvin and the Chipmunks

Alvin Seville in one of the three protagonists of the Alvin and the Chipmunks. He is the shortest among his three brothers, and is also seemingly the leader of the group.

He is an enthusiastic and headstrong chipmunk who is fearless and constantly coming up with new ideas and plans for adventures. At his core, Alvin loves his brothers deeply and will always be there for them, albeit he tends to be very selfish at times.

These cartoon characters that start with A are some of the most well-known and popular characters in animated history, and for a reason. These characters are ones most of us know and love since our childhood days due to their good nature and fierce personalities.

Characters like Aladdin and Ariel have had deeply resonant journeys where they change and grow to be better people. Watching them makes an impact even to this day. They have cemented themselves in pop culture due to how memorable and likable they are.