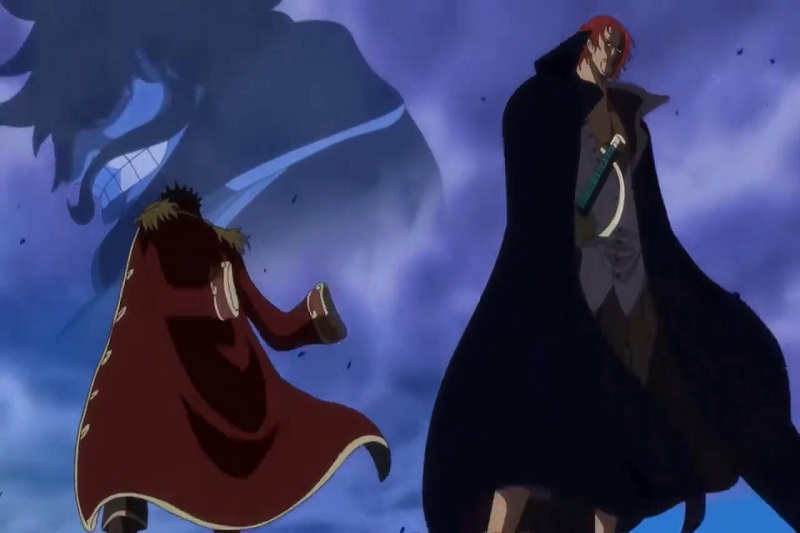 Shanks is currently the most popular and trending character of One Piece. He is one of the strongest and most influential pirates in the New World. Since the beginning, there have been many theories surfaced regarding Shanks due to the mystery of his character. He has unbelievable charisma, and no one can guess his real intention or what he really desires. Today in this article, we are going to answer the question, “Is Shanks Evil?”

The answer to the question is: Presently, it is nearly impossible to determine Shanks’ dreams. Hence his end goals will specify whether he is evil or not, as his character in manga remains a mystery rather than a straight evil character. During the promotion of the film Red, Oda sensei briefed us that Shanks has his plans for the new era. Till now, one knows what he is up to, but various points make him suspicious. Currently, we could say that his true ambitions and agenda are hidden inside the story.

Later in the post, we explained the various events of the One Piece manga in which Shanks played a significant role and concluded an unbiased result based on it. So, let’s discuss. 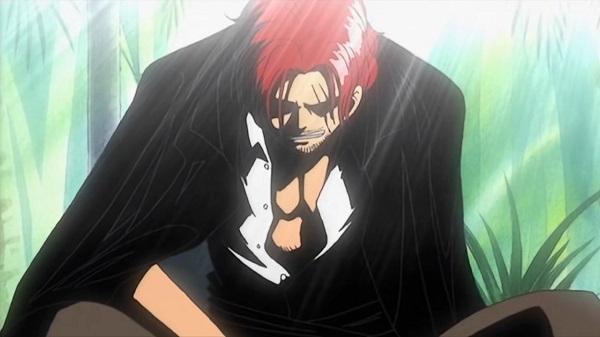 When Luffy gets the Yonko status, Shanks and his crew become very happy. Meanwhiles, Shanks reminisces his memories of when he came to Wano to give a send-off to Kozuki Oden. At the end of Chapter 1054, Shanks tells his first mate Ben Beckman “Isn’t it about time to go and claim One Piece” This context made a lot of fans go crazy about it and made them wonder what Shanks truly meant.

During many events of One Piece, we witnessed that Shanks never took any side; he was always neutral and might be focusing on maintaining the world balance. He’s not a bad person; there is an instance in the movie Red where we were shown that Shanks and his crew were not ready to fight against Hypnotize citizens, whereas marines did not hesitate to attack them.

Shanks always helped those who were in need. He has a few actions he did throughout the manga:

He took only actions when it was necessary.

In the beginning, Shanks goes to Fusha Village, and many wonder what the purpose of visiting that island is. He fully knew that island was the hometown of Monkey D. Garp, yet he visited frequently. Further, he even manages to befriend Luffy, who is the grandson of Garp. During the Wano arc, we learned how much struggle Shanks took to obtain Gomu Gomu No Mi devil fruit. 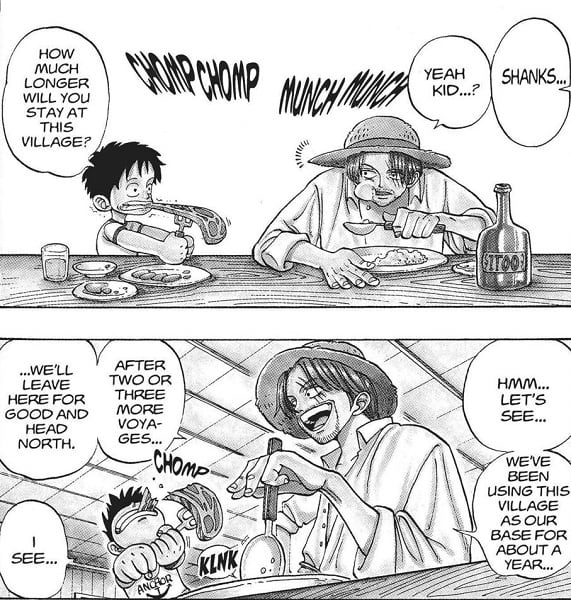 Many wonders when it was that important and why he put carelessly out there that too near Luffy. The fruit might be for someone else, probably for Ace, son of late Gol D. Roger. Even in chapter 1, when Luffy asks how long he will be in this village, he simply tells him that after two to three voyages, he will head for the north.

After Luffy accidentally consumes the devil fruit, Shanks gets shocked. After that, Shanks leaves the island, where he comes back at some later point where he sees Luffy being executed by Higuma. Shanks saves Luffy at the cost of his arm and gives him his hat after hearing the exact words of his former captain.

One thing that blew the fans’ minds was Shanks meeting Gorosei. It made everyone wonder how Shanks even managed to have connections with these people. How did they even allow a mere pirate on Mariejois, the holy place where Celestial Dragons reside? This raised many speculations and made Shanks even more suspicious. 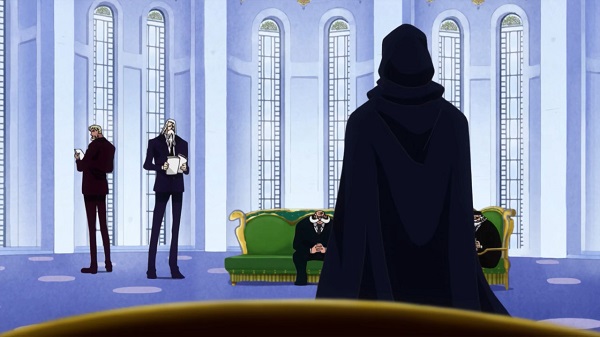 After the incidents of Whole Cake Island, Luffy was declared the fifth Yonko of the sea. When Shanks read the news and immediately said to himself that it was about time they would see soon. After that, he quickly went to meet Gorosei, who told him that they only made time because it was him. Gorosei also refrained from politics considering his status. There, the only purpose of his visit is that he wants to talk about a certain pirate.

There might be a certainty he went to talk about Blackbeard or Luffy. Apart from that, many wonder why he even bothered to meet the five elders when he knows that they are behind many atrocities in One Piece’s world. This leads us to believe that he might be a celestial dragon. Even Sengoku said the same thing about Shanks when he came to stop the war.

Here, we are not taking the reference of Shanks’ entrance into the Marineford war. Because instead of Shanks, if some other Yonko had arrived, then still Marines would have to stop. They were not in the condition to take on another Yonko.

One of the thrilling moments of the Post Wano arc is the reappearance of Shanks in the manga. When Aramaki comes to Wano to capture Luffy, Shanks immediately sends his Haki blast, forcing him to retreat. Coincidentally it was about the same time when Luffy unlocks the full potential of his devil fruit. Many wonder how Shanks even came to know about this; there is a possibility that he used his Observation Haki to see the future. Or just witness his new form in Wanted Poster. 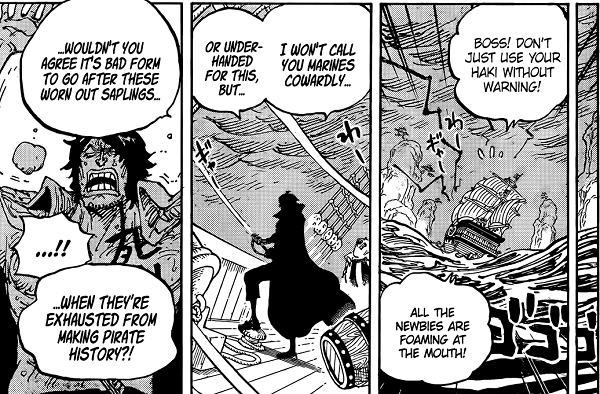 From the Wano arc, we remember that Oden’s journal, which Yamato carried, had torn pages which led us to believe that Shanks might have found and read the log book. He might have torn those pages and concluded regarding One Piece. So, he might have planned and stolen the devil fruit to give it to someone else, probably Ace.

Before he left, he told Ben that it was about time to find One Piece. This led us to believe that Shanks was waiting for Luffy to unlock the true potential of his fruit. It might be that his fruit is interlinked to One Piece. He waited 24 years from the moment his former captain died to make his move on One Piece.

Is Shanks Celestial or Xebec’s son?

These things about Shanks again bring us back to the question regarding his origins, whether he is Celestial Dragon or Xebec’s son. Shanks was born 39 years ago before the storyline, and the God Valley incident took place 38 years ago. In the movie Red, it was shown to us that Roger and Rayleigh found him at the age of 1 inside a treasure box.

Let’s discuss the first theory that Shanks is Xebec’s son. There might be a chance he is the son of Xebec. This makes him the person who carries Will of D. During his meeting with Whitebeard, when they talk about his past, he mentions a certain guy. As he goes on that this certain guy gave him the injury, and seeing Shank’s face aches his injury.

There might be a possibility that the certain guy was Rocks D. Xebec, not Roger. Xebec might have given him the injury when he went to recruit Whitebeard. That leads us to believe that Shanks is the son of Rocks. This might connect us to why Shanks is always wary of Blackbeard, as he might want to fulfill his idol Rocks D. Xebec’s dream.

Let’s discuss the second theory that Shanks is a celestial dragon. There might be a chance he is one of them as he easily walked into the holy land, had a direct meeting with five elders, and Sengoku listened to his request immediately. This would lead us to the that he is the natural enemy of the people who carry Will of D. As can be shown by his opposition to Blackbeard, the man who gave him those three scars around his eyes.

One thing in common is that whether he is Xebec’s son or a Celestial Dragon, it sadly makes him the enemy of Gol D. Roger.

There is less probability of Luffy fighting against Shanks in the series. Shanks will be the last man whom Luffy wants to face. Luffy will only fight against Shanks if he harms his crew members. But still, for Luffy to become pirate king, he has to surpass Shanks, who is currently the most powerful person in the world of One Piece.

So, this is it for today, folks! Here, we have concluded our article on “Is Shanks Evil? Latest Shanks’ Theory in One Piece “. We will update once the story progresses further, as we know Shanks is going to take care of Bartholomew, the guy who burned his flag under the name of Luffy.