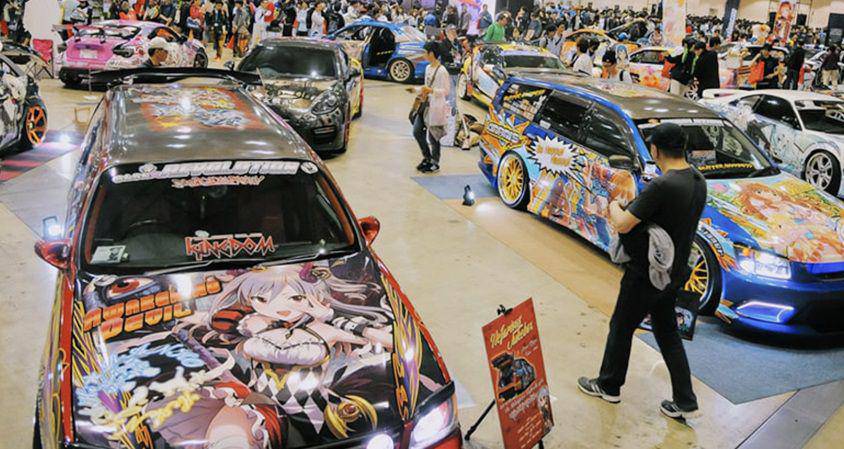 The world is now no stranger to anime and manga. There are millions of types of merchandise, events, and anime products loved by the fans. One such popular product is Itasha Car. If anything, we know that the essence of anime is vibrant and artistic, which immediately catches your eye.

Therefore, Itasha Car is an automobile decorated with stickers, vibrant colors, and artwork featuring anime references. But this is quite a condensed explanation of what an Itasha car is, so let’s dive in deeper and learn everything about these beautiful cars. And if you’re looking for some of the coolest and latest new designs for your car to make it an Itasha car, we’ve got you.

What is Itasha Car?

Japan is an incredible country boasting a dynamic and unique culture. Those of us who love anime will surely know that Japan is best at meeting the demand of its people, and that includes Itasha cars. These are extravagant and beautifully decorated cars showcasing their owners’ love for anime and art.

Itasha cars usually have one main theme of any anime, and the entire body of the car is painted with characters or references from that anime. And if you happen to see an Itasha car in real life, you are bound to be stunned and admire it all your heart.

Itasha cars are highly popular in Japan and are often seen during anime events, meets up, and auto racing. But it doesn’t mean they can’t be spotted casually driving by on the roads of Japan. The three top hotspots for anime lovers in Japan are Akihabara, Nipponbashi, and Osu. Therefore, you are likely to spot an Itasha car in this region.

You’d be surprised to know that Itasha cars didn’t just begin to exist recently. Their existence dates back to one of the classic & luxurious eras of anime in Japan, the 1980s. During the 80s, imported Italian cars were popular in Japan, and hence, came the slang “Itasha,” which was initially a modification of the Japanese word for “Italian cars.”

However, over time the slang obtained more meaning itself. Since these cars were expensive and extremely luxurious, the slang is a combination of two words, painful “itai” and car “sha.” The idea is that these cars are so embarrassingly extravagant that it’s painful to look at.

Furthermore, during the 80s, anime merchandise also became a thing due to the growing popularity of anime. Similar to an anime convention, Itasha conventions also began to take place, which encouraged more and more people to embrace their love for Itasha cars. Therefore, presently Itasha cars are one of the most popular automobiles in the anime, manga, auto racing, and video game community.

Now that you know about the rich history of Itasha cars in Japan let’s see why they are so popular even outside Japan.

Itasha cars have taken over the Japanese market, and the fans love them. Even if one isn’t mainly a fan of anime, one can still purchase their desirable car and modify it according to their choice of theme, character, or stickers, which would still technically be an Itasha car.

But the main essence of anime Itasha cars is that they are heavily painted and modified with some of the most innovative ideas and even gears. They go big and bold with the details of the decorations on them. That’s what makes them so desirable.

Itasha cars allowed people to express their love for anime or any other media and even be proud of it. They gave the freedom to express their individuality and creativity and turn their dull-looking cars into something popping and fun.

The world is no stranger to one of the longest and best anime, One Piece, at this point. The anime has an overwhelming fanbase that admires and enjoy the anime with everything they’ve got. Since the main theme of the anime is Pirates and comedy, those who love the Pirate culture were quick to incorporate ideas from the anime into their Itasha cars. Therefore, One Piece itasha is one of the most popular itasha even in 2022.

There are countless ideas that the manufacturers offer to the buyers since the show features some powerful and quirky characters, items, and fictional power visuals. The buyers can also use the latest visuals and references of 5th Gear Luffy to create a stunning white gradient blending into his iconic red and yellow color scheme.

Sailor Moon is one of the pioneers and classic anime that is still as popular as ever. Since it is one of the OG anime, it has been marketed and dubbed in many languages worldwide. The anime features all kinds of characters ranging from loli to waifu to husbando. The art style is vibrant and vintage- just the two things that make Itasha cars what they are.

Given Sailor Moon’s popularity, Sailor Moon Itasha is one of the most popular Itasha cars desired by many. The buyers can create some beautiful bubbly designs using the art style and vibrant color scheme of the anime.

Many of the Sailor Moon Itasha feature Sailor Moon, Sailor Venus, Chibiusa, and Luna. Those who want to try something new can consider the underrated characters of the anime, such as Esmeraude, Kaorinite, Sailor Ceres, etc., to create some of the coolest-looking Itasha cars.

Demon Slayer is one of the top shounen and award-winning anime that helped anime become mainstream as it is now. The anime has insane animation and OSTs that both non-anime watchers and Otakus enjoyed to the fullest. Ufotable studio raised the standards for animation with Demon Slayer, and that is why it is one of the most popular themes of Itasha cars.

The anime has endless references to choose from, such as the Breathing techniques, beautiful haori, and stunning character designs. Some of the popular designs are breathing technique animation for wheels, hood, and windows, Nezuko, Tengen, and Zenitsu. Thanks to the unique artwork and theme of the anime, there is a lot of room for creativity in designing a Demon Slayer Itasha.

Re: Zero is one of the top isekai anime featuring intricately designed characters. The series garnered millions of fans admiring its plot, animation, and of course, all the mystery. And that is why Re: zero itasha is one of the most popular itasha. The artwork of the anime is pretty and allows the buyers to be as creative as they want. Some most desired characters from the anime are Rem, Ram, Emilia, Subaru, demon beast whale, etc.

Rem, in particular, is the most famous waifu of all time, so it’s no surprise that re: zero itasha is one of the most popular and coolest itasha cars. Additionally, if the buyers are looking for some new designs, a Roswaal and Echidna-themed itasha would look so cool.

Pokemon is one of the oldest anime and is still ongoing. The series has countless characters and some of the prettiest pokemon to choose from. Pokemon Itasha cars allow the fans to mix and match pokemon and their attacks to create some of the stunning looking itasha cars. And to top it off, everyone knows and watches Pokemons, so no wonder about its massive popularity worldwide.

Since pokemon are creative and designed based on various living and non-living things from real life, they give a unique look when used on itasha cars. For example, a Darkrai-themed itasha car with the headlights as its eye would make such a cool and gothic Pokemon itasha car.

Attack on Titan is one of the best mind-bending and award-winning anime out there. Studio Wit did an outstanding job upgrading the animation and OSTs to their full potential. The artwork and style of the anime are simply stunning and even grotesque. AOT is one of the top anime and most recommended for new viewers.

Isayama made sure fans have plenty of references and stunning graphic designs to choose from when it comes to incorporating into an itasha car. That’s why AOT itasha is most desired. Given its massive fan fanbase, AOT itasha is not only popular in Japan but worldwide.

Titan-themed itasha cars are the most common and popular AOT itasha cars. So those who want novelty can use the Underground Chapel color palette from the series to create a stunning pastel or gloss gradient on their itasha cars. And AOT features some of the prettiest eyes, which can also be used in this idea.

Tokyo Ghoul is one of the unique and dark anime featuring stunning character designs. It’s simply a masterpiece by Ishida Sui. The series is so popular worldwide that Tokyo Ghoul itasha is one of the most common itasha to be seen during conventions.

The concept of Kagune and the overall dark theme appealed to millions of fans who love a good thriller. That’s why Tokyo Ghoul itasha is popular worldwide. The designs and artwork of the anime are simply unique and exceptionally creative, inspiring the fans to create unique designs for their itasha.

Some of the common ideas include Kaneki, Suzuya, Rize, and Touka-themed itasha. For those who love gothic or grunge themes, this anime is it for your Tokyo Ghoul itasha car.

Sword Art Online is one of the top anime featuring video games and futuristic themes. This appealed to the fans who love a good fantasy gaming anime. And even apart from the main theme, the series has a rich and suspenseful plot that attracts many fans regardless of their taste.

Therefore, given the popularity of anime worldwide, SAO itasha belongs to the list of the best and most popular itasha cars. The most common characters used by the fans are Asuna, Kirito, and Sinon. The world of the series changes according to the plot, and therefore, the same characters have different appearances throughout the anime.

This gives the fans plenty of options to design their itasha, ranging from a futuristic look to simply an artistic one.

Naruto is another long and popular anime gathering millions of fans all across the globe. This anime is one of the best recruiters of new otakus into the community since it is most recommended. The anime has a vibrant and contrasting color palette which appeals to many fans who love an extravagant itasha car theme.

The anime has plenty of beautifully designed characters, moves, and symbols. That’s why it gives a lot of creative freedom to the fans. Some common ideas include Naruto, Sasuke, Kakashi, Hinata, and Pain-themed itasha. So, to create a unique Naruto itasha, fans can use Toads, Bijuu, and Sharingan themes instead of simply a character.

Dragon Ball is the most mainstream anime and a globally popular one at that. It has fans belonging to every other fandom who also love Dragon Ball. The anime has a classic and bright art style. Therefore, it appeals to many fans. Another best thing about anime is that it offers a lot of tools, attack visuals, and symbols.

Therefore, Dragon Ball itasha is one of the most popular itasha cars. Some common ideas include Goku’s various forms, dragon balls, Frieza, Vegeta, and Beerus. The anime has plenty of characters to choose from for those who want to create a new and unique look for their itasha car.

Dragon Ball Itasha marks the end of our list of the top 10 best itasha car design ideas in 2022. We will be back with more such articles focusing on various anime trends, products, and merchandise. Until then, browse through and read some of the topics that we have already covered. Happy reading!