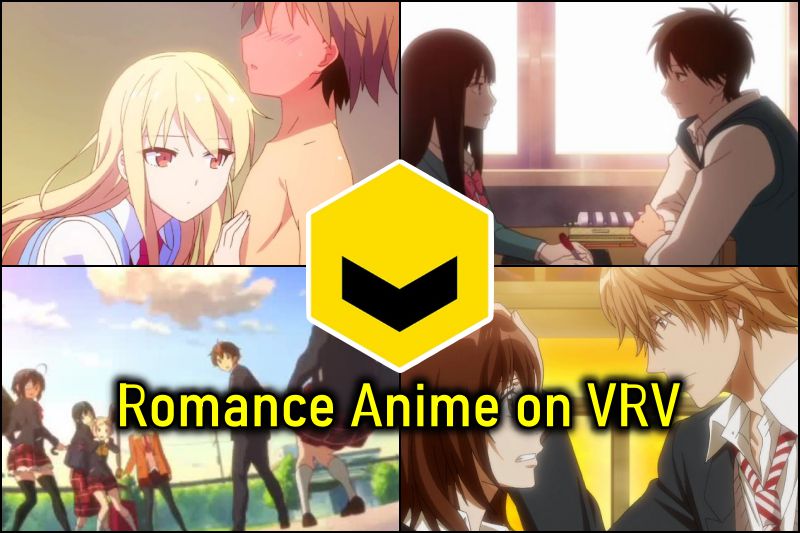 The romance genre has been in demand since the entertainment sector begins. The genre has attained exponential popularity within people in the modern era. If we speak about the Anime industry, Romance, Shounen, Slice of Life, these genres have currently become the new cravings for Otakus.

Romance anime is all about the joys and sorrows of falling in love, the little things that make life worth living, and finding happiness where you least expect it.

Therefore, in this article, I’ve listed some of the best Romance anime which are available on VRV. The post particularly targets US anime fans who are passionate about watching some good anime with their partners.

The following Top 15+ Romance Anime on VRV list offers different perspectives on romance; some are lighter with comedy and fantasy elements, while others are flamboyant with a slice of life in it. 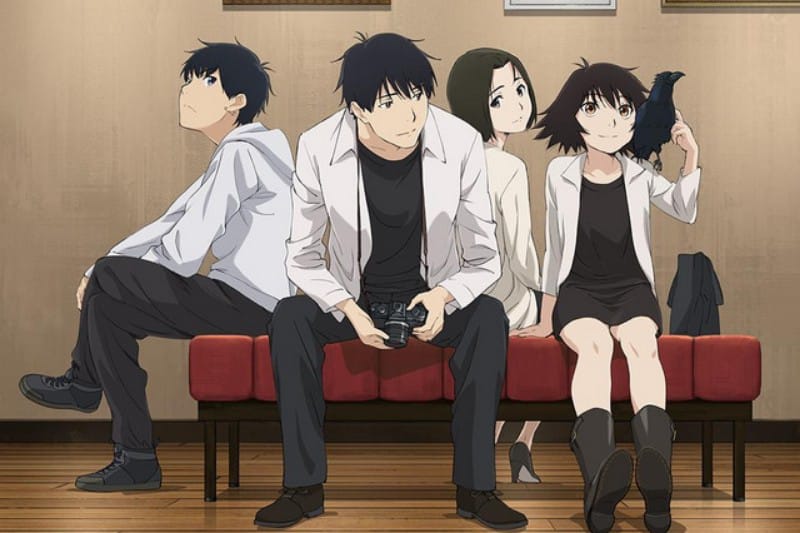 It is a Seinen demographic romantic drama with a slice of life. It has shown the love and humanity among friends who try to live their best lives through hardship.

The story revolves around the main character, Rikuo Uozumi, who is living a boring life after graduating from college. However, his life takes a beautiful turn when a girl named Haru Nonaka befriended him. One day, he learns that his old crush, Shinako Morinome, has moved back to town.

So, he desperately reaches out to further their relationship. So, from there, how does the story go? 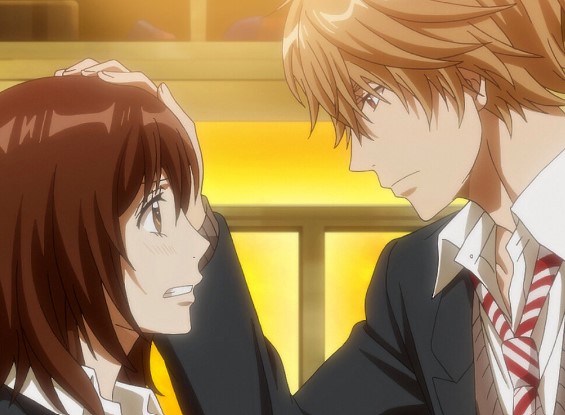 It is one of the best romantic comedy anime. It revolves around a young girl, Erika Shinohara, who lies about her relationship in order to earn respect among her friends. She also sends a picture of a random handsome stranger to prove herself.

But things change when she learns that the stranger is none other than being Sata Kyouya, who is in the same grade in their school. Now trapped in her own lies, she convinces him to act as his boyfriend.

However, Sata is not the gentle guy she thought of; he is a mean-spirited sadist who made Erika a dog in exchange for keeping her secret.

15. Our Love Has Always Been 10 Centimeters Apart 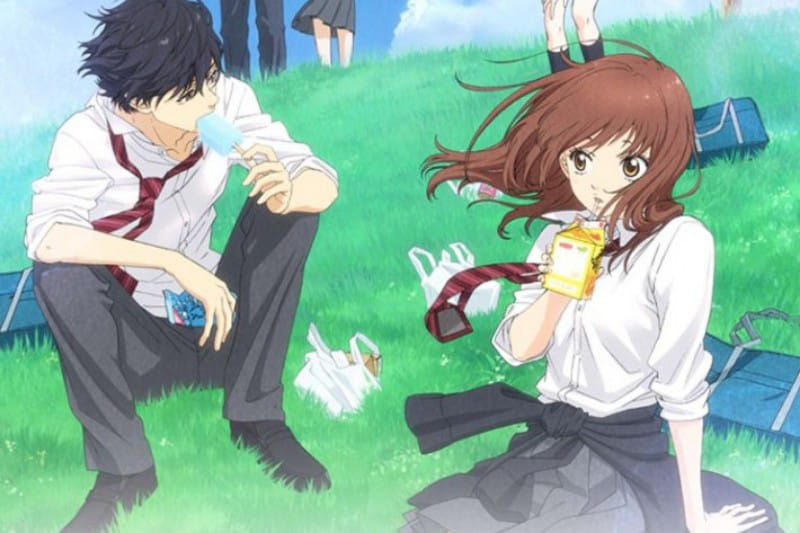 The first emotional, romantic anime on our list is “Itsudatte Bokura no Koi wa 10 cm Datta” or “Our love has always been 10 centimeters apart.” It is a story of Miou Aida and Haruki Serizawa, who have opposite characters.

Despite their different nature, they both like each other. However, they are always 10 cm apart to discuss the future with others. Miou Aida is a shy girl from the school art club who struggles with choosing a path for herself.

In contrast, Haruki Serizawa is a confident movie boy who desires to become a professional movie director. They both are only an arm’s reach away to choose their daunting future together. So, what will happen? 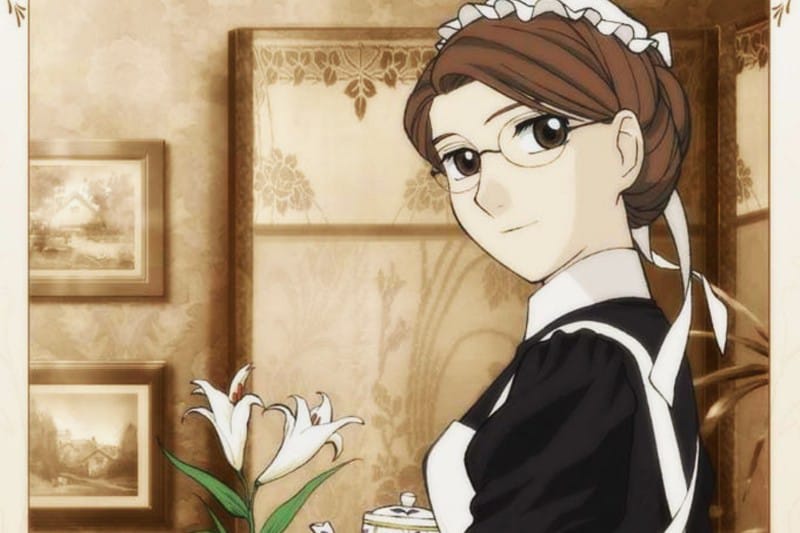 Emma: A Victorian Romance is a historical romance anime having a slice of life in it. It also has a decent plot. The story revolves around a girl named Emma, who is working as a maid for a retired governess. She is gorgeous, humble, and loves her job.

One day William, the eldest son of the wealthy Jones family, fell in love with her. His polite nature and earnest attempts win her affection. Now they are in love with each other but will the 19th society of England accept their love? 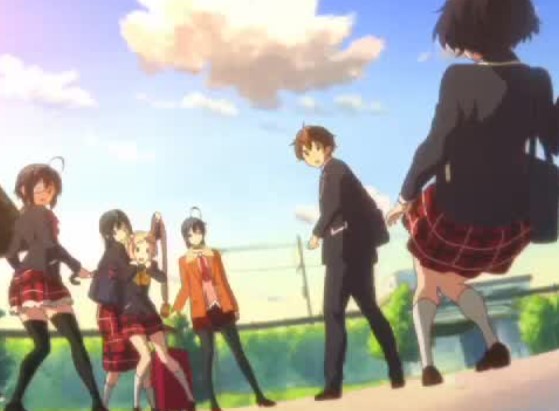 Love, Chunibyo & Other Delusions is a comedy romance anime with some fantasies. The story revolves around a boy, Yuuta Togashi.

He was descended from a fantasy realm in the past where he posed as the “Dark Flame Master.” But now he decides to live a normal life, so he joins a high school far away from where no one can recognize him.

One day, Rikka Takanashi, a new girl, joins him as a classmate. She is a self-declared vessel of the “Wicked Eye,” and her entrance made Yuuta’s life upside down. So how will he be able to hide his embarrassing memories from everyone? 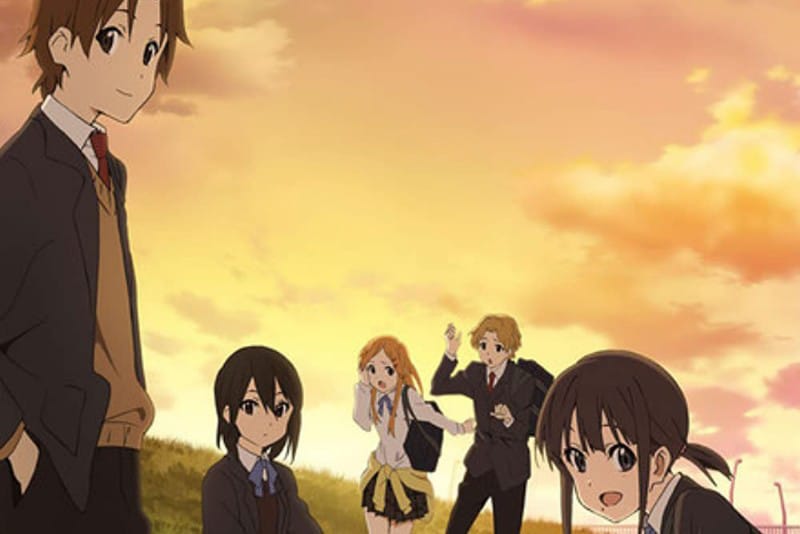 It is a supernatural romance anime. The story revolves around five students, who together form a school club named Student Cultural Society or StuCS. All five students have different likings/traits; Taichi is a wrestling fan, Iori is an indecisive optimist, Himeko is a calm computer genius, Yui is a karate practitioner, and Yoshifumi Aoki is the class clown. In short, they all five are not better in any field.

One day, the body of Yui and Aoki interchanged for some period of time, and then this incident started to happen to all 5 of them. In this way, they will find out each other’s hidden secrets and scars. So, will their friendship remain the same or tear apart? 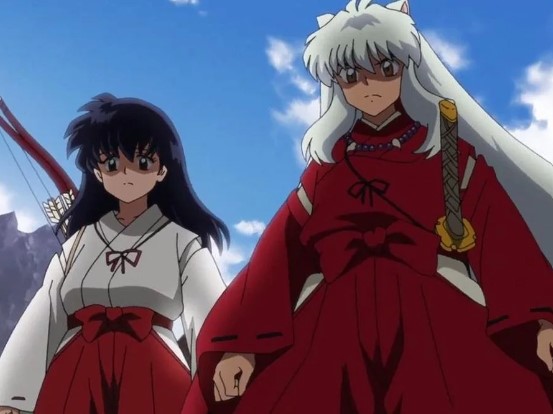 Another adventure comedy anime drama on the list is InuYasha. It is a story of a 15 years old girl, Kagome Higurashi, who is dragged by a demon in the well where she ends up in Japan, 500 years in the past.

There she forms a team of different traits example, a young hybrid dog-demon/human named Inuyasha, orphan fox-demon Shippo, the intelligent monk Miroku, and the lethal demon slayer Sango. They all work together on the same quest. 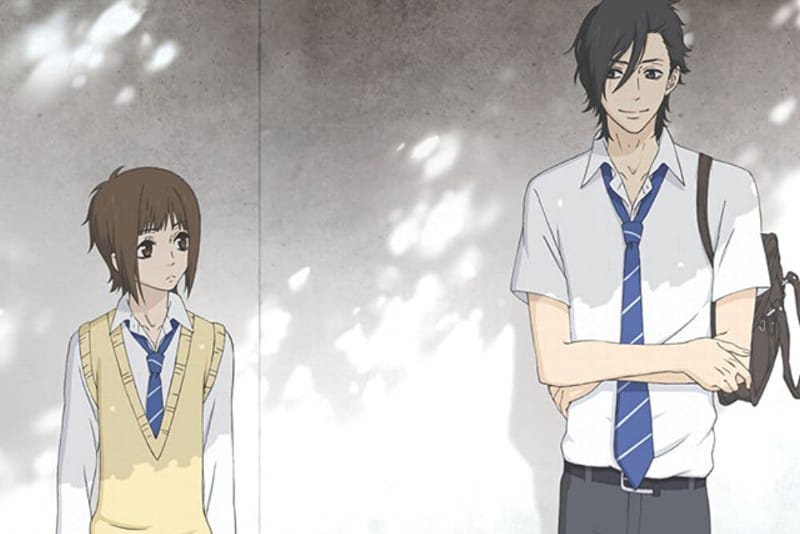 The pure romance anime which I personally recommend you to watch with your partner is Say “I Love You.” It is a story of a high school girl, Mei Tachibana, who decided to live alone because her friends ended up hurting her every time.

On the other hand, a boy named Yamato Kurosawa is in the same class as her who is very popular with girls. He has dated many girls in his school life. One day, his attention catches Mei, and he vows to become her friend. So how does the story goes on? Who will say, “I love you” first? 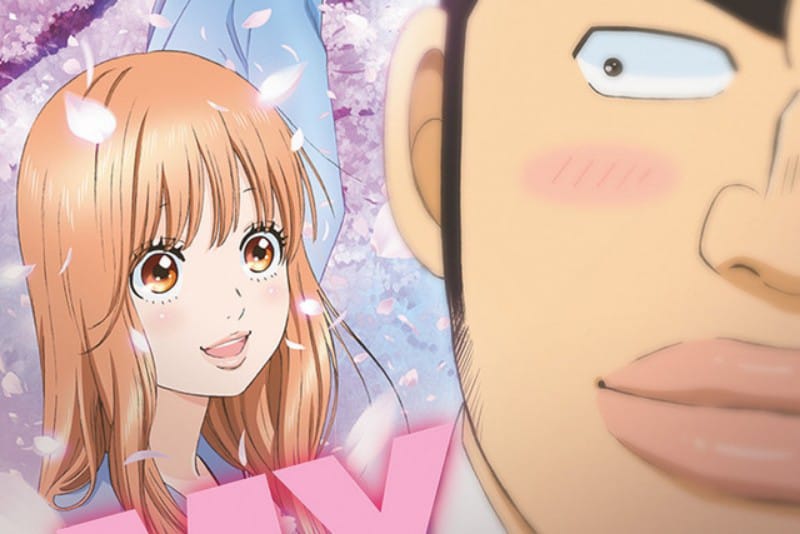 It’s a sweet comedy, romance drama with a slice of life in it. Many of you can relate to the story of Takeo Gouda. He is a tall guy with a muscular build, and due to this trait, no girls find him attractive.

On the contrary, his friend, Makoto Sunakawa, easily steals every girl near to him, even the one he loves.

Still, he lives happily. One day a cute girl, Rinko Yamato, enters in his life. He falls in love with her, but he thinks that she might be interested in Sunakawa like other girls. So, what will happen now? 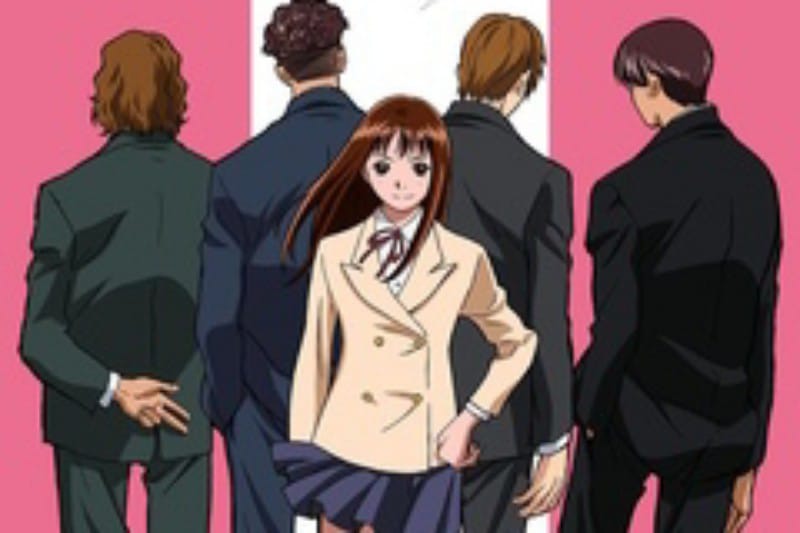 Another Shoujo romantic anime where a working-class girl, Tsukushi Makino, surrounds herself with rich children. She visits Eitoku Academy, where only children from wealthy families come. One day, Tsukasa Domyoji, the wealthiest in the Academy, takes an interest in her because she is the only one who doesn’t talk to him.

However, Tsukushi falls in love with someone else. So, how will this story proceed? This is also one of the best romance anime on VRV. 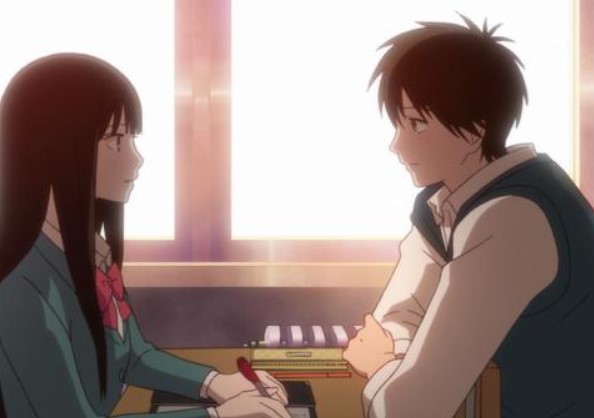 Kimi ni Todoke: From Me to You is my favorite romance anime. It covers only 25 episodes with a slice of life in it. The story revolves around a sweet girl, Sawako Kuronuma, who is living everyday life with her friends.

One day her attention is drawn naturally to the most popular boy in her class, Shouta Kazehaya, who is full of courage and has cheerful nature.

They both get along with their common Ayane Yano and Chizuru Yoshida. After meeting Shouta, she believes that his presence can change her future for the better. I personally recommend you to watch it with your partner. 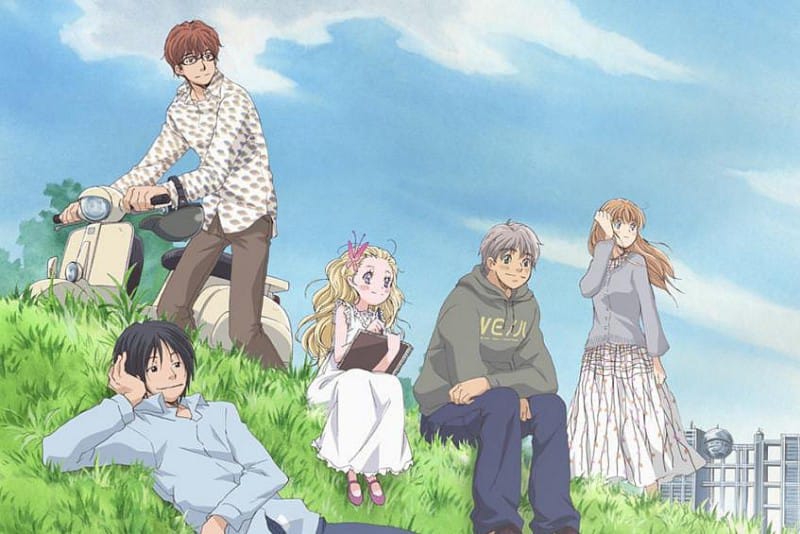 This romance anime drama is a tale of youth-love and soul searching will full of comedy. It is also one of the best Romance Anime on VRV. It is a story of a boy, Yuuta Takemoto, who studies in an arts college and lives with his two seniors in a cheap apartment.

One day he meets a beautiful girl, Hagumi Hanamoto, and falls in love with her. Hagumi is also perusing the same course.

Soon he gets to know that Hagumi is a friend with Ayumi Yamada, who is already well acquainted with these three flatmates. But the twist is, Ayumi has deep feelings for one of them.

5. The Pet Girl of Sakurasou 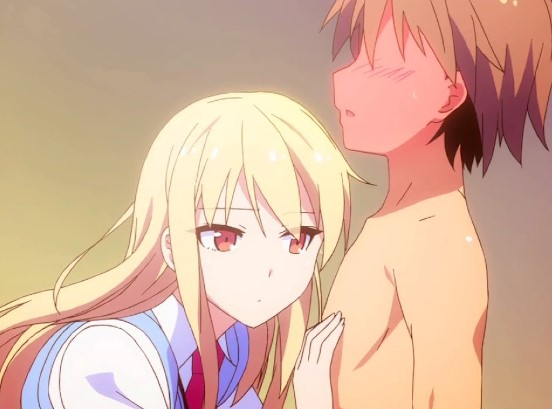 The Pet Girl Sakurasou is comedy romance anime which that displays how someone with other quirks can change our lives. It is a story of the infamous Sakura Hall of the Suimei High School.

Sorata Kanda, a second-year student, accidentally moved into the Sakura Hall for the abandoned kittens, and from then, his life changed when he met the misfits of the Sakura Hall. 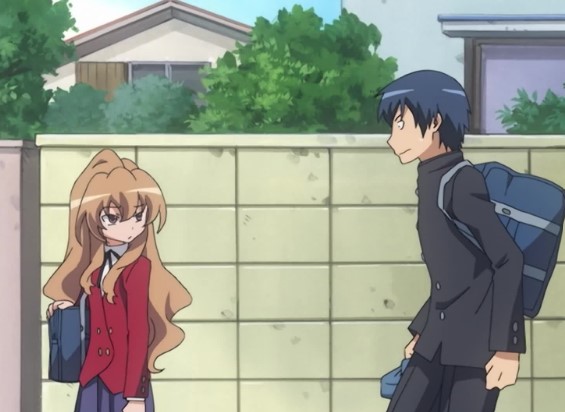 Another personal favorite anime, Toradora, means Tiger x Dragon. It is a story of a boy and a girl with opposite natures. Ryuuji Takasu is an ordinary schoolboy with a gentle heart and intimidating face; that’s why he is labeled as a Dragon.

On the other hand, Taiga Aisaka is a small doll-like cute girl who is always ready to attack anyone with her wooden katana. Due to her fragile nature, she is known as “Palmtop Tiger.” 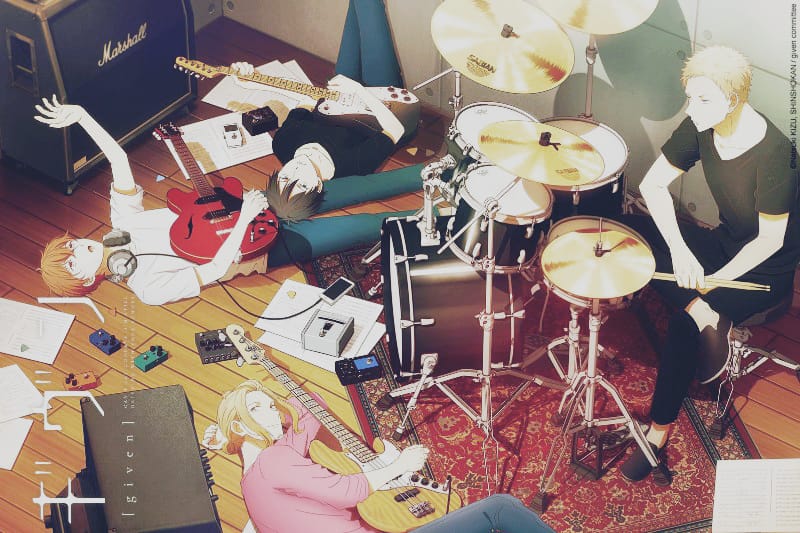 Given is one of the best boys who love romantic dramas. The story revolves around the four boys who begin their own band after a fateful encounter.

Mafuyu Satou, a talented singer, Ritsuka Uenoyama, having knowledge of the instrument along with two bandmates: bassist Haruki Nakayama and drummer Akihiko Kaji, they form a band and regular practice on a jam session. 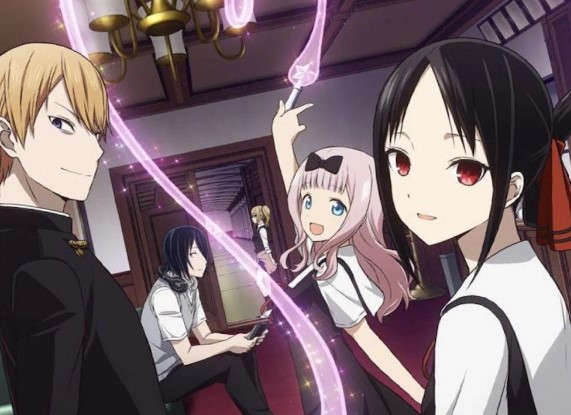 It is a romantic royal anime with a seinen demographics. It is a story of a boy and a girl, Miyuki Shirogane & Kaguya Shinomiya, who are the President and Vice-President of the Shuchiin Academy, respectively. Everyone knows they both are the perfect couple.

However, the twist is despite knowing that they both have feelings for each other, none of them confess because of the imaginary loss. So, how their love story will proceed?

1. Your Lie in April 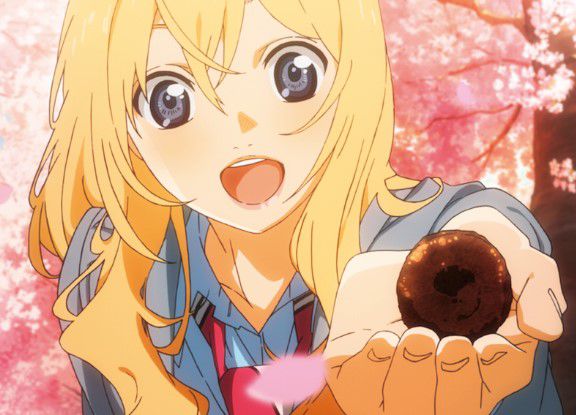 The first one in our list of the Top 15+ Romance Anime on VRV is none other than Your Lie in April. It is one of the most popular romantic anime. I know you’ve already heard the name of this drama. So why not give it a try?

It is a story of a high school boy, Kousei Arima, who is a pianist. But after the passing of his mother, he falls into a downward spiral in which he is unable to hear the sound of his own piano. Due to this, he avoids his piano and lives a normal school life with his friends.

Two years later, he meets a beautiful girl, Kaori Miyazono, who is a violinist. Her music fills the color in Kousei’s black and white life. In this way, the beautiful love story of two musicians begins.

Here, we have concluded our list of Top 15+ Romance Anime on VRV. Fans can watch these anime on VRV without the requirement of any premium account. The ones who don’t live in the US can use VPN to watch their favorite drama. We will be back with another ranking article. Till then, stay tuned with us.