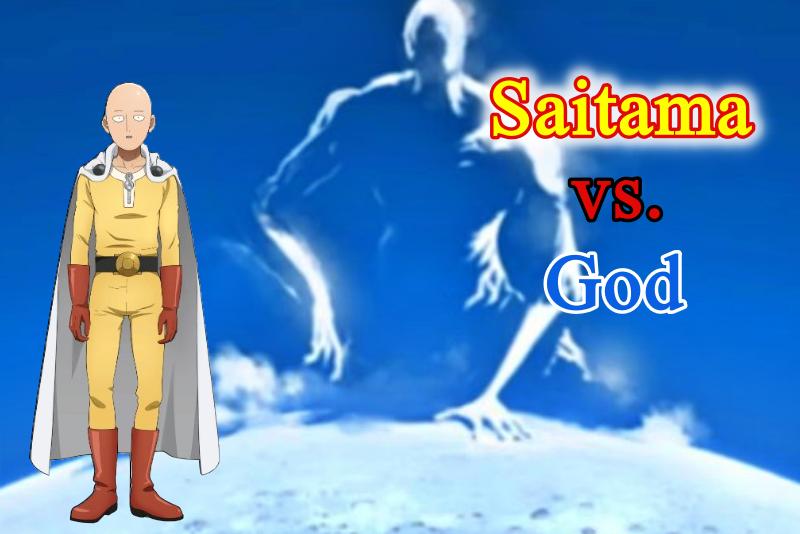 Saitama is one of the most ridiculously overpowered superheroes, who is said to have the potential to even beat God. God has been the embodiment of power since the start of the universe and is capable enough to hold multiple threats on his own.

Saitama vs God is a fight that fans have been waiting for a long time, and today, we are going to see who takes the lead. In the one-on-one fight of Saitama vs God, it is no doubt that Saitama will emerge victorious with his power and strength. And the short answer to the question, “Is Saitama stronger than God,” is yes. Saitama is so strong that he can destroy this entity; that’s why God never faces him in a one-on-one fight.

God is also a very powerful entity, but beating the baldy cape hero, who always holds back in fights, is not a feat for God to achieve. Later on in this post, we will take a detailed look at the characters’ abilities and strengths and end the discussion with a detailed comparison.

Who is Saitama in One Punch Man 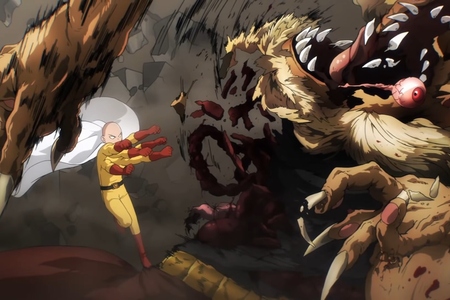 Saitama, the strongest hero in the Hero Association, has never suffered a defeat in any of his battles. He has too much monstrous raw and physical strength, which cannot be compared to any character.

He also does not usually fight with his full power, as it is uninteresting for him to end a fight with one blow. Even in the fight with Boros, the latter stated that Saitama was still holding back with his serious punch, even after splitting clouds across thousands of miles.

Saitama is unmatchable in terms of speed, strength, fighting capacity, and abilities. No one from the S-class heroes can even come to the same level as him, even if Saitama only uses normal punches.

He withstood the damage from his serious punch, copied by Garou, and was unharmed by the effect, which shattered stars at a distant place. In the whole series, no one even comes close to hurting Saitama, which showcases the durability of the hero.

Who is God in One Punch Man? 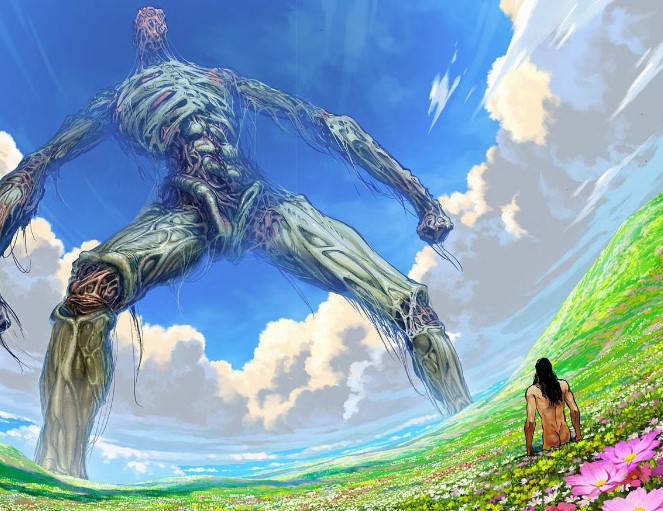 God is supposedly the end antagonist of the manga and is a powerful entity that bestows Garou with unimaginable power. With this power, Garou was able to stand toe-to-toe with the hero for a small part of the fight.

It was also shown that it had a previous encounter with the S-rank hero Blast, who tried to give Blast power, but the latter refused. God tried to finish off Blast after this, but the latter managed to fend off his attacks and manage to escape.

Even Psykos and Homeless Emperor met the entity, and it looked like a giant human-like figure with no face. It also shortly copied the appearance of Blast in Tatsumaki and Garou’s visions, making it seem that God has a lot of different appearances, looking different for each person.

It has been helping people attain a power level, which they could never attain, and to dispose of a single threat, Saitama. We know very little of God, barring its enormous amount of power and ability to see through everything.

God is a large and inter-dimensional entity that can appear anywhere almost instantly and deny people the truth about its true form. We can safely assume that it does see Saitama as a threat to its existence due to the power possessed by the hero.

Is Saitama Stronger Than God? 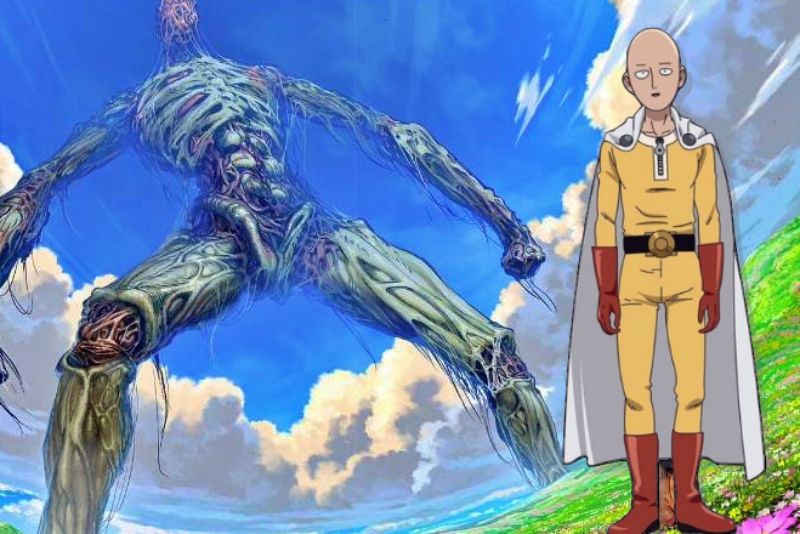 The short answer is yes, Saitama is stronger than God. Saitama was powerful enough to be labeled as a threat by the higher entity. Saitama even beat Cosmic Fear Garou with ease after he received powers from God to defeat Saitama.

The caped crusader even beat Garou’s speed of teleportation and learned his trick of Time travel. With this, he effectively managed to defeat Garou with zero punches, saving Genos.

This means that God’s trick to surpass Saitama’s speed is nowhere good enough to outrun the hero when he is in serious mode. Even after Garou copied the same intensity of Saitama’s serious punch and struck him with it, it was not even able to put a single scratch on the hero.

Saitama is unharmed by his attacks, just like all the other attacks he had received previously. It is safe to say that this much power, speed, strength, and durability cannot be bested even by the God-like entity of the universe.

Saitama vs God: Who Will Win?

Saitama vs God will be an interesting as well as a prolonged battle, which we fans would love to watch as it unfolds. But undoubtedly, the winner would be Saitama, who has the power to withstand everything and deal a killing blow to anything in one punch.

God should have his power level on par or greater than Saitama to recognize him as a threat and transfer power to villains to defeat the hero. Based on this, we can surmise that Saitama will, for once, get to show his real true strength.

Saitama is an always-evolving hero who sets limits depending on his opponents; it is also noteworthy that Saitama can copy and perform God’s abilities better than the omnipotent entity.

There is also the rapid growth of Saitama to factor, which let him become the strongest hero in one year. His rapid growth would also allow him to surpass God and become the supreme entity that threatens its existence.

Saitama’s rapid growth and his mimicking abilities should be the main reason for his win against God. This way he can copy even the speed and strength of others, which is superior to him, and further strengthen it.

God, on the other hand, should have his fair share of combat strength and experience, but he will ultimately lose to the caped baldy in a battle of strength. This area lines perfectly with Saitama’s monstrous strength and his accelerated development rate.

Saitama should be faster than God traveling through his inter-dimension portals, as he was faster than Garou, who received the same powers from God.

God can traverse through dimensions swiftly, but it would mean nothing when Saitama is in his serious mode and will overcome the otherworldly entity. Saitama has the upper hand in this battle, with his innate talent for speed.

He had been honing this skill for years and is the best there is to present. On the other hand, we are yet to look at the true speed of God, which we didn’t witness yet.

The undisputed winner for this round is Saitama, as he can withstand his serious punch and stand unscathed. God, on the other hand, will take damage, even a little, from the Hero’s punch, which will be slowly chipping away at his life essence.

Saitama’s serious punch is capable of affecting far-away galaxies with its shockwave and can decimate even large planets in one blow. And Saitama withstood the effect of Serious Punch twice when his fist collided with the same attack copied by Garou.

Saitama was fast enough to search Jupiter’s moon to search Garou’s exit from the portal while the latter was teleporting and dragged him out. This proves that Saitama has the fastest speed as well as reflexes in his universe.

He can evade attacks at point-blank range perfectly, all the while attacking his opponent. God, on the other hand, is certainly fast and has superhuman reflexes, but is that enough to defeat Saitama, who bested its move just like it was nothing?

Saitama will ultimately be the winner of this battle, with his top speed and superhuman reflexes, which should not be possible for anyone else to display.

He can perfectly copy all of God’s abilities and reflect them with even more power. This will be good enough to defeat God, but not his large range of abilities, which he has possessed since eternity.

Here, we shall conclude our article on Saitama vs God, and after looking at both characters, we can safely say that Saitama is the powerful entity of the two and will end up being the winner in a battle between the two.