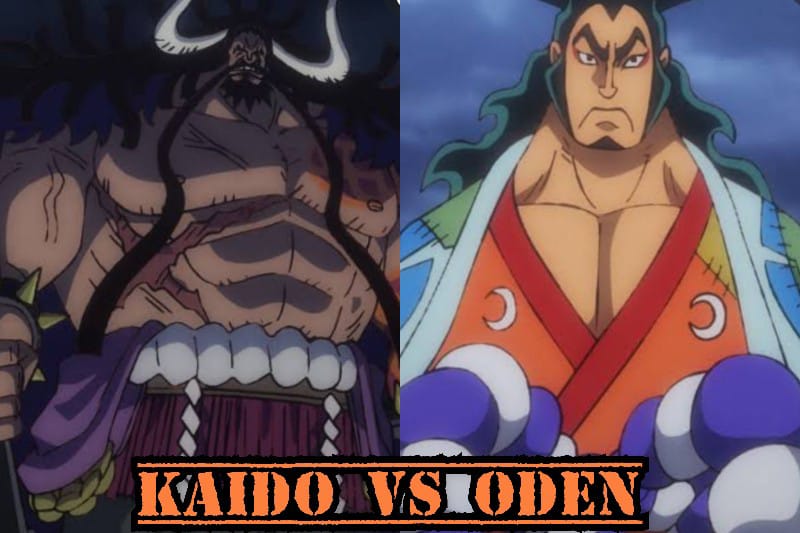 Kaido has been one of the strongest characters in One Piece for a long time now. At present, there are almost no characters who can actually defeat him in a one-on-one fight. Kaido has subsequently gained the title of the ‘strongest creature.‘

So we have to search for the proficient man who gave Kaido his first and only wound, Kozuki Oden. The series unveiled that the legendary battle between Kaido and Oden was interrupted by Kurozumi Higurashi. But what if the fight was not interrupted. What would be the result then?

The answer to the question “Kaido vs. Oden: Who would win” is: Twenty years ago, Oden could have defeated Kaido because, at that time, Kaido was not in his most potent form. But in the present scenario, Kaido will win the fight. In his mythical hybrid Zoan form, he can defeat Oden. If we take both the characters at their prime, Kaido can overpower Oden because of his extensive control over his devil fruit ability.

Later in this post, we have explained more about Kaido vs. Oden. Hence, without any further ado, let’s discuss.

Kaido vs Oden: Who is stronger?

Kaido, in his hybrid form, is stronger than Oden. Kaido is one of the characters in One Piece who knows the Advance Conquerors’ Haki, and the series has not unveiled whether Oden used advancement or not.

Since Oden and Kaido were at their peak at different times, we will take the past and present both in context.

In the past, Oden was one of the most powerful individuals. He defeated a bear with his bare hands at four years of age. Oden rose to become the second division commander of the Whitebeard Pirates and later on joined the Roger Pirates.

Oden fought both Whitebeard and Roger at their prime and was able to hold their ground. A fight between them most likely would have ended in a draw. He also gave Kaido his solitary scar and was wrongfully distracted by Kurozumi Higurashi, resulting in the undertaking by Kaido 20 years before the present timeline.

At present, Kaido is one of the strongest in the entire world and would easily overpower Oden in terms of sheer brute strength. Even Kaido put Oden at the same level as the other sea emperors and was an exceptional swordsman in his own right.

While both Oden and Kaido were born with superhuman strength, Kaido developed his power more through heavy hard work and sea battle experiences. On the other side, Oden did his training under the Wano Kuni.

If we compare them based on brute strength, Kaido has the upper hand.

Both the fighters are extremely fast when they want to be. Kaido, in his dragon form, can slither and fly while Oden was catching rabbits by two shows the extent of his speed. Kaido has a heavier and bigger framework that makes it difficult for him to move at a pace as fast as Oden.

Oden’s figure is small and lithe, and with his samurai training, he was able to garner excessive speed that could even match Roger at his prime. Oden easily won this comparison.

3) Based on Devil Fruit Abilities

There is no comparison here; Kaido definitely takes this round and that too by a considerable margin. Oden did not have the powers of any devil fruits. He sorely relied on his physical prowess in battle to overpower his opponents.

Kaido, on the other hand, ate the Uo Uo no Mi, Model: Seiryu; a mythical Zoan type devil fruit that allowed him to turn into an Azure Dragon. He can use the flaming breath in his dragon form to lift entire cities. He can also use a hybrid form for more effectiveness. Overall, there is no comparison here between them.

Oden and Kaido both have immense mastery over all three forms of Haki: Haoshoku Haki, Busoshoku Haki, and Kenbunshoku Haki. Both are immensely powerful in their respective usages. Kaido had used his Haki abilities against other devil fruit users such as Big Mom.

On the other hand, Oden had fought with his Haki against Roger, which created a lightning effect. Oden also used his Busoshoku Haki against Whitebeard at his prime. In this round, we vote for Kaido because he can also use the advanced Haoshoku Haki.

Kaido wins this battle, straight up. There can be no question about it simply because Kaido has out-of-world durability. His skin is tougher than steel. While Oden was the only person ever to give him the only scar, he is at a massive disadvantage in a contest of durability.

Granted that Oden does have his own set of durability- you cannot fight Roger and Whitebeard and live to tell the tale unless you are incredibly durable. However, Kaido is simply a beast when it comes to that. He wins this round by a considerable margin.

This is one comparison where Kaido has less chance. The series has not revealed much about Kaido’s background. Indeed, he is also born with the Conqueror Haki means he is also from a good tribe.

On the other hand, Oden came from the Kozuki family and was the son of Kozuki Sukiyaki, the shogun of the Wano Country. He was also the founder and member of the Nine Red Scabbards, so that too is a thing to consider. Therefore in this comparison, we believe Oden has the upper hand.

So finally, if both of these characters would have to fight, who would win?

We think Kaido might win by a slight margin, although there are greater chances that the battle will probably end in a draw because Oden is no slouch when fighting.

Here we conclude our article on, “Kaido vs. Oden and who would win in one-on-one battle.” We hope you like it. The One Piece anime is available for streaming on Crunchyroll and Hulu, and the Manga is available on Viz. New episodes are released every Sunday. We will be back with another post. Till then tuned with us.