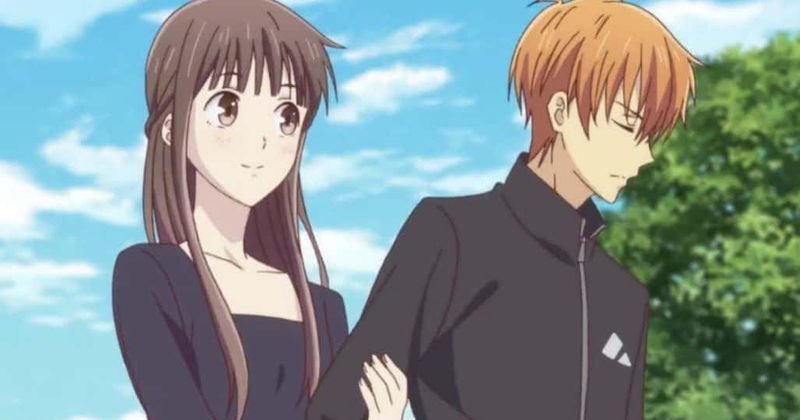 Anime is sometimes cited as the best form of escape. But in all honesty, nothing draws a reader deeper into a universe than a well-written romance. Anybody can be moved to tears by a beautiful romance, and anime is one of the few arts that does them some fair justice. The most popular anime genres are the survival and adventure ones, as well as the romantic ones.

In this article, we present to you some of the most famous, well-known romance anime with hot characters. So stay tuned till the end! 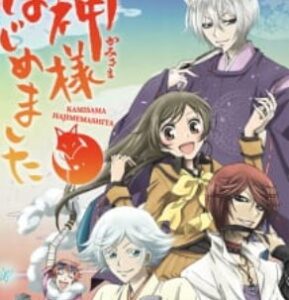 Starting off with a light romance anime with hot characters, we have Kamisama Kiss. It revolves around Momozono Namami, who is only 17 years old but lacks luck in her life.

Boys are not attracted to her, her academic performance is average, and on top of that, due to her father’s passion for gambling, she is forced to move out of their apartment, until one day when she helps a handsome young man in a park.

After a small talk, the man gets to know about her issues and extends an invitation for her to move into his abandoned home. He also gives her a forehead kiss to show her how grateful he is.

Turns out that she received an invitation to reside in a shrine dedicated to a God and that the young guy who kissed her had actually given her the deity’s mark. Her situation changes, but she must now focus on both her academic achievement and the responsibilities of her divinity. 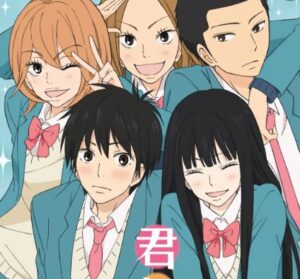 Due to Sawako Kuronuma’s resemblance to a character from The Ring series, she is given the nickname ‘Sadako‘ and is mistakenly thought to be evil when she is actually sweet. She naturally is drawn toward Shouta Kazehaya, the most popular boy in her class.

Sawako has admired Kazehaya’s capacity for being the center of attention since they first met and has wanted to be just like him. She gradually an interaction with him and experiences new emotions. Sawako is unaware that Kazehaya has also been altered by her presence.

8) Shikimori’s Not Just a Cutie 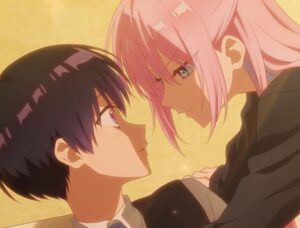 Izumi and Shikimori are couples in high school. They hold hands while walking home from school, make flirtatious gestures, and make fun of one another. Shikimori, however, is aware of what she wants and how to obtain it. Izumi adores being around when she transforms from cute to cool in an instant! This anime is available on Crunchyroll. 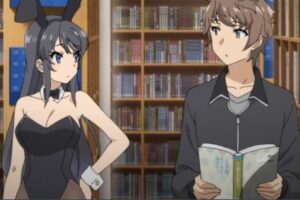 One day at the library, Sakuta Azusagawa, a second-year student at Minegahara High School, runs across a bunny girl. She turns out to be Mai Sakurajima, a nationally renowned actress who is presently taking a break from acting and a third-year student at Sakuta’s high school. Despite the fact that Mai generally stands out in a crowd, for some reason, nobody can notice her.

The following day, Sakuta approaches her on the railway station platform after spotting her despite Mai’s warning not to interact with her for the rest of his life. Sakuta discovers the unusual occurrence that has been afflicting Mai there. And as the anime goes on, we see a drastic change in Azusagawa’s life. 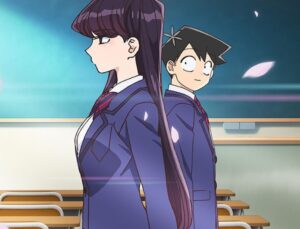 A boy named Hitohito Tadano attends high school with a goal: to stay out of trouble and try his best to fit in. He fails miserably as he sits down next to Shouko Komi. His classmates now view him as someone to get rid of if they want to sit next to her.

Despite her secretive character, Komi is gorgeous and elegant with long, dark hair and is incredibly popular. She is unable to socialize with her classmates due to terrible anxiety and a communication disorder.

Events force Komi to communicate with Tadano by writing on the blackboard. After realizing that she is unable to converse effectively, he learns that Komi wants to make 100 friends during her senior year of high school. Will she succeed in her mission? 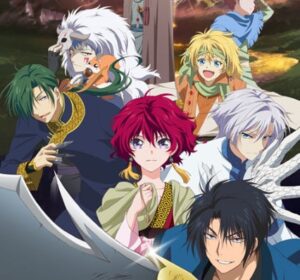 Princess Yona lives a quiet and protected life in the realm of Kouka with her father. Yona’s only difficulties in life are her wild red hair and convincing her father to approve of her marriage to her cousin while being protected by her bodyguard, Hak, and surrounded by staff.

Yona, however, on the night of her 16th birthday, loses everything and is compelled to leave the castle. Yona understands that she must grow strong if she wants to survive because Hak is the only person remaining to defend her. She sets out in search of allies to find the four Dragon Warriors to take back her kingdom. This is one of the most watched romance anime with hot characters. 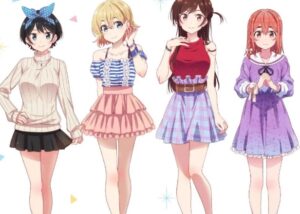 Mami Nanami abruptly broke up with Kazuya Kinoshita, leaving him alone. He uses an online app to find a rental girlfriend in an effort to ease the misery. His partner, Chizuru Mizuhara, is able to win Kazuya over with her unrivaled beauty and sweet personality.

Kazuya, however, thinks Chizuru’s pleasant smile and caring nature were all simply a show to play with his heart, and he evaluates her poorly after reading about similar experiences of other clients with her. Chizuru returns to him after becoming enraged. But Kazuya’s grandma passes out.

They hurry to the hospital, where they discover Kazuya’s grandma is already fine. She is perplexed by Chizuru’s presence and wonders who this girl could be. Kazuya immediately declares that they are in love, compelling Chizuru to play along. But with Kazuya still caught up on his prior relationship with Mami, how long can this demanding client and reluctant rental girlfriend keep up their act? 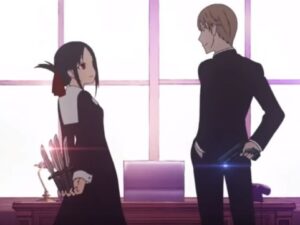 Miyuki Shirogane and Kaguya Shinomiya are the foremost representatives of the student body at the prestigious Shuchiin Academy. Miyuki is the president of the student council and is regarded as the best student in the country by mentors and peers.

Vice president Kaguya, the eldest child of the Shinomiya family, shines alongside him in every imaginable subject.

They are viewed as the ideal pair and are the envy of the whole student body. Both, although having feelings for the other already, are unwilling to acknowledge them. The person who admits defeat first will be despised and regarded as less. They both are determined to win, but the question is, who will actually win this love battle? 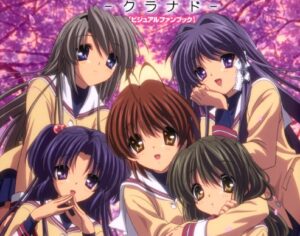 Tomoya Okazaki, a guarded delinquent student at Hikarizaka High School, struggles to make sense of the connection he has with his alcoholic father after the loss of his mother. He also struggles to find meaning in his life. One morning on his way to class, he encounters Nagisa, who is a delinquent like him and is repeating her senior year.

Nagisa asks Tomoya for assistance in reviving the school theatrical group. Being idle, he chooses to participate. The two try to find comfort and a sense of belonging in their endeavors as they make friends with numerous other students along the road. 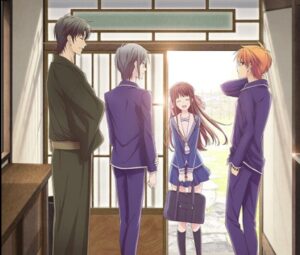 On the first number of romance anime with hot characters, we have Fruits Basket. Tohru, a 16-year-old girl who lost her mother due to a tragic incident, moves in with her grandfather but must leave since his house is being renovated. She is hiding out in a tent in the woods while claiming she will find someone to stay with.

One night when she is heading back to her tent, she discovers that her house, tent, is buried underneath a landslide. Yuki Sohma, the “prince” of her school, and his cousin Shigure Sohma, a famous author, stumble across Tohru’s situation and invite her to stay with them until her grandfather’s home renovations are complete.

When Tohru arrives at the Sohma home, he learns about their odd secret: when a Souma is hugged by a person of the opposite gender, they briefly change into one of the zodiac animals! But this strange occurrence is no cause for amusement; rather, it is a horrible curse with a troubled past. As Tohru travels on, encountering more members of the zodiac family, she discovers a secret that could have an impact on her. Will, what is ahead be overwhelming for her tender heart? It is available on Netflix. (India)

Wrapping up the article of the top 10 romance anime with hot characters thinking that you would have liked it and are planning to watch one of these. Have a pleasant day, and stay tuned for more posts like these!