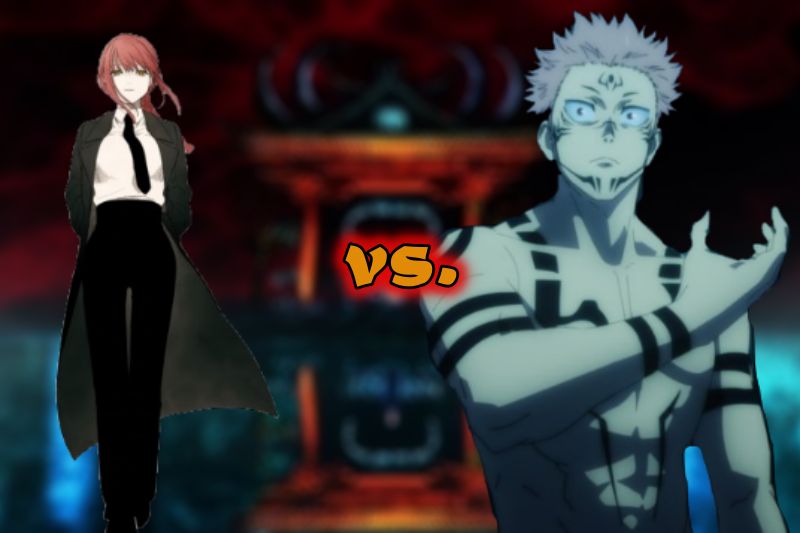 Jujutsu Kaisen’s Ryomen Sukuna and Chainsaw Man’s Makima are two of the most powerful antagonists to date. With both possessing such strong skill sets, concluding a Sukuna vs. Makima battle is tough.

Well, here’s the short answer! After considerate deliberation and not knowing the full potential of Sukuna, it’s undoubtedly Makima! Her countless, innumerable list of abilities, paired with her cunning, manipulative personality, would stand to be a formidable opponent to the King of Curses.

However, Makima is relentless, unyielding, and, considering current stat levels, would emerge victorious. But that doesn’t mean Sukuna is less powerful.

In this post, we’ll go into detail about their respective powers and abilities. Next, we’ll determine who wins based on four criteria: strength, speed, ability, and durability, and finally, conclude on the overall winner in the Sukuna vs. Makima battle.

In his present incomplete state, he was able to defeat Special Grade Curses: the Finger-Bearer with two of his fingers and Jogo and Mahoraga with 15.

As a being in possession of immense cursed energy and exceptional control over it,

Other than these core abilities that make use of his Jujutsu, he’s

Makima is the physical embodiment of humanity’s fear of control. She’s one of the strongest devils in the series and is unbeatable by all except Denji (Chainsaw Man) and the Darkness Devil.

Sukuna vs. Makima: Who would win & Comparison

Sukuna has a much higher striking strength than Makima. He’s exceptionally skilled in hand-to-hand combat and has taken out various special-grade curses with a single swipe of his hand.

At full power, his strength would be impossible to counter without the use of other special abilities.

Sukuna’s incredible speeds have been taken into notice and acknowledged even by the likes of powerful sorcerers such as Gojo. He’s faster than multiple special-grade curses and has incredible reaction speeds as well.

While Makima’s speed is comparable to Sukuna’s base speeds, and she’d land a couple of blows on him, ultimately, she wouldn’t be able to catch up when he’s on 15 fingers worth of power and higher.

As mentioned above, both Sukuna and Makima have a wide range of powers and abilities at their disposal.

While Makima’s Force Manipulation or psychic powers could be used as a potential attack, we don’t know the effects it would have on a cursed spirit. Makima could also make use of the Angel Devil’s weapon creation ability, which she previously used to severely damage the intangible Ghost Devil.

Escaping Sukuna’s Domain Expansion, however, could prove to be difficult. As it manifests in physical reality, any escape, including teleportation, is blocked, and any attack against the target is a direct hit.

However, Makima’s could use her contract with the Japanese Prime Minister, allowing her to transfer damage inflicted on her to Japanese citizens and manage to survive until the Domain expires.

Ultimately, Makima would be able to defeat Sukuna.

The two factors that we must take into consideration here are Sukuma’s regenerative ability and Makima’s immortality status as a Control Devil.

Both can withstand a large amount of damage. Makima can instantly transfer any damage done to her body, and Sukuna’s reverse cursed technique is extremely efficient too.

It’s a close call, but ultimately, Makima would win this contest.

Based on these criteria, we can see that Makima and Sukuna are almost at the same power level, with Sukuna winning the first two categories and Makima the rest. However, we have incomplete knowledge of Sukuna’s power level and skill set with 20 fingers consumed.

Neither do we know the effects of Cursed Energy on Devils. If they’re indeed poisonous to the Control Devil or not is still not determinable. If so, then Makima could be defeated by Sukuna’s cursed energy and Domain Expansion technique combined.

As of now, Makima’s ability to control and make use of the contracted devils is definitely a huge plus point over Sukuna. Moreover, even if she were to be defeated, the simple fact is that she would revive. Just as she did after Chainsaw Man defeated her at the end of arc 1.

Thus, in a Sukuna vs. Makima battle, Makima is the overall winner. Here, we conclude our article.