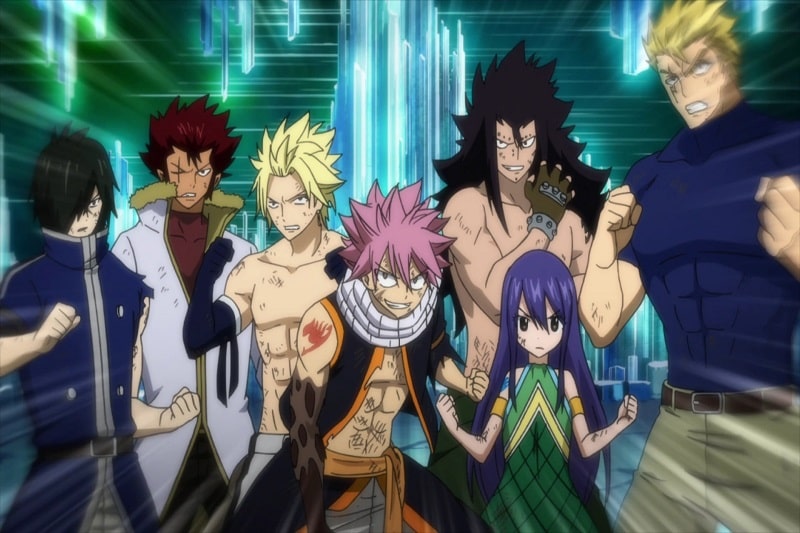 Fairy Tail is one of the popular manga released back in 2006. During its peak, it challenged toe-to-toe with the mighty Big 3 (One Piece, Naruto, and Bleach). So, here have come up with another exciting topic on Fairy Tail and its sequence 100 Years Quest. Today in this article, we are going to discuss and rank “All Dragon Slayers in Fairy Tail & 100 years quest” from weakest to strongest.

Dragon Slayers are nothing but wizards who use dragon-slaying magic. This magic is an ancient spell and also lost magic where the user is generally a caster type. The dragon slayers were created by Irene Belserion, the queen of Dragons. She is also the mother of Erza Scarlett. Dragon Slayers of five generations differ in how they obtained the power.

The fifth generation of dragon slayers is those who gain power by devouring the dragons. They are also known as Dragon-Eaters. Unlike other dragon slayers, they are prone to motion sickness. So, after this explanation of the five generations of Dragon Slayers, let’s begin the list of “All Dragon Slayers in Fairy Tail & 100 Years Quest.” The fifth generation Dragon Slayer is a member of the Diabolos Guild is Madmole, who made his first appearance in Chapter 7 of the sequel manga. He appeared alongside Kiria and Skullion Raider. Madmole uses Armor Dragon Slayer magic which helps to gain him the power of armor dragon.

During his encounter with Erza, he could easily block her attack using his magic in Water Dragon God arc. Later he appeared in the Wood Dragon God arc, where Laxus took him out in one shot. He later appeared alongside other guild members during The Great Labyrinth arc. 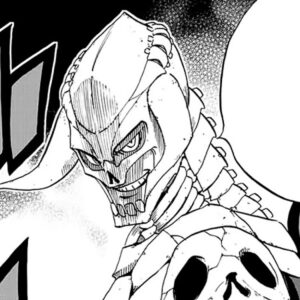 The fifth generation Dragon Slayer is a member of the Diabolos Guild is Skullion Raider, who made his first appearance in Chapter 8 of the sequel manga. He appeared alongside Kiria and Madmole. Skullion Raider uses Corpse Dragon Slayer magic which helps to gain him the power that makes use of ashes.

During his encounter with Fairy Tail guild members, he easily identified that Mecrophobia had lost its power. He is an expert at making wise decisions. During the wood dragon arc, he was taken out by Laxus with ease. Another fifth-generation Dragon Slayer and a member of the Diabolos Guild is Nebaru. He first appeared in Chapter 33 of the sequel manga during the Wood Dragon God arc.

Nebaru uses Clinging dragon slayer magic that makes use of sticky substances. During this arc, he confronts Wendy.

During the fight, he used his dragon force, and his physical appearance changed. Wendy defeated him during the fight. His whereabouts are currently unknown. The fifth generation Dragon Slayer is a member of the Diabolos Guild is Wraith who first appeared in Chapter 34 of the sequel manga during the Wood Dragon God arc. He uses Spirit Dragon slayer magic that makes use of spirits. During this arc, he confronted Natsu.

Later, we learned that he was originally a fairy tail guild member. During one of the quests from the guild, he was gravely injured by the monsters. Even with the help of Porlyusica, he succumbed to his injuries. He passed with Makarov by his side.

Later, his spirit lingered, and he joined the Diabolos guild. While in the guild, he helped Kirin by capturing the soul of the thunder dragon Elexion. Finally, after getting defeated by Natsu, he passed on. 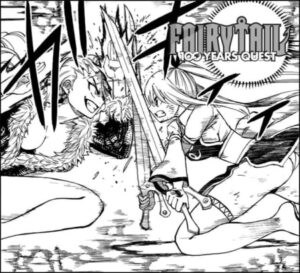 She is the fifth-generation dragon slayer who appeared during the Water Dragon God arc, where she was held as a prisoner. Kiria fought against Erza and managed to hypnotize her. She uses Blade Dragon slayer magic that makes use of blades. She cuts off her adversary’s mental strength with her magic.

Her magic didn’t work on Erza, who has one fake eye, and also it didn’t work on Laxus as he considered him inferior when compared to another guild member during his fight. In the current arc, she fought against Lucy but got beaten by her. The fifth-generation Dragon Slayer and one of the Dark Dragon Slayer Knights of the Diabolos guild is Haku, who made his appearance during The Great Labyrinth arc. Haku easily managed to subdue Natsu, Lucy, and Happy at ease and making Lucy’s celestial power useless.

He confronted Wendy but was defeated by her when she managed to master her enchantment magic. During the fight, he was fascinated with Wendy, which factored into his loss. 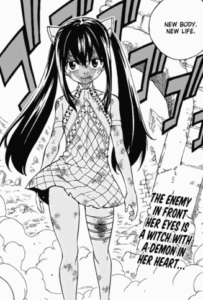 Wendy Marvell is the first-generation dragon slayer who has the power of Grandeeney. She is the Sky Dragon Slayer who is a member of the Fairy Tail guild. At the beginning of the series, she was a support-type wizard with her few shining moments during the Tatraros arc and Alvarez Empire arc.

She showed exponential growth in the manga, where she overcame some dangerous opponents in the sequel manga. In the sequel, she took on Haku and Nebaru, where she emerged victorious. 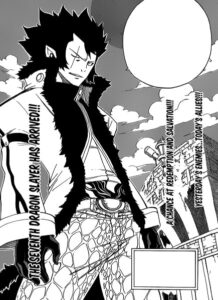 He is the second-generation dragon who obtained his power by consuming the power of the poison dragon’s lacrima. Erik started as an antagonist in the manga. He was a member of Oracion Seis, which was a dark guild. Oracion Seis, along with Grimoire Heart and Tartaros guild, formed the Ballam alliance.

He was defeated by Natsu during his first confrontation, after which the magic council arrested him. During the Grand magic games arc, he was released by the magic council to assist the dragon slayers in defeating the dragon. He aided Natsu and others during their final battle against Acnologia. He is a member of Crime Sorciere, where he is atoning for the sins he committed in the past. 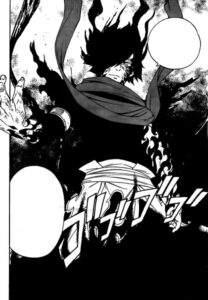 Rogue is the third-generation dragon slayer who got his power through Skiadrum as well as Lacrima. Rogue is a member of the Sabertooth guild and is a Shadow Dragon Slayer.

During the Grand magic games arc, he fought against Natsu and later on against Gajeel, but he was defeated both times by them. He fought against Acnologia along with Natsu and others, and they defeated the dragon king with collective efforts. 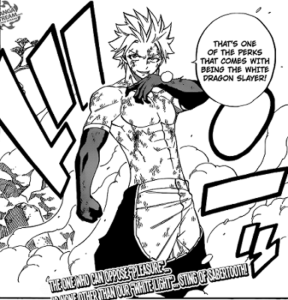 Sting is the third dragon generation dragon slayer who got his power through Weisslogia as well as Lacrima. He is the guild master of Sabertooth guild and is a White Dragon Slayer. During the grand magic games arc, he fought against Natsu, but he was defeated by him.

Later on, he aided the Fairy tail guild on many occasions. During Alvarez Empire arc, he fought against Larcade Draganeel, where he was having a tough fight. Sting finally manages to overcome when he combines Rogue’s Shadow Dragon magic with his White Dragon magic. He fought against Acnologia along with Natsu and others, and they defeated the dragon king with collective efforts. 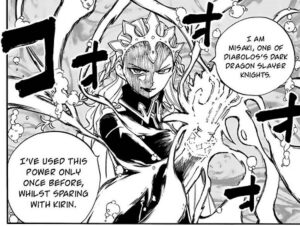 Misaki is the fifth-generation dragon slayer and one of the Dark Dragon Slayer Knights of the Diabolos guilds. She made her appearance during The Great Labyrinth arc and fought against Erza during this arc. She overwhelmed Erza during the fight, but she did not estimate Erza’s toughness into account. This proved this very costly, which led to her defeat.

Gajeel is the first-generation dragon slayer who was given dragon slayer power by Metalicana. He started as an antagonist in the manga. He was a member of the Phantom Lord Guild, which was a rival to the Fairy Tail guild. After his guild’s defeat, he joined Fairy Tail after getting offered by Makarov.

During the battle of the Fairy Tail arc, he aided Natsu in defeating Laxus. Gajeel unlocks his dragon force during his climatic battle against Bloodman. He is the iron dragon slayer magic which makes use of Iron.

In the sequel manga, he started to care about guild even more as we can see that he quickly finds Touka suspicious. He was the only one who didn’t trust her, but unfortunately, he became a victim of her spell. He fought against Natsu under her influence but lost him. Currently, he is about to fight against God Serena. Kirin is the fifth-generation dragon slayer as well as one of the Dark Dragon Slayer Knights of the Diabolos guilds. He made his appearance during The Great Labyrinth arc. Kirin easily managed to frighten Laxus using his power during the first half of their battle.

He got his power by consuming the Lightning Dragon named Elexion, who was killed by Georg Reizen. But the dragon’s heart was taken by Georg as he wants to sell it for a high price in Ishagar. This led to him having nightmares about it, so he took the help of his guildmate Wraith.

Wraith managed to capture the soul of Elexion inside a coffin. During his fight against Laxus, he tells him that he was the one who became a dragon using Elexion’s Lacrima. 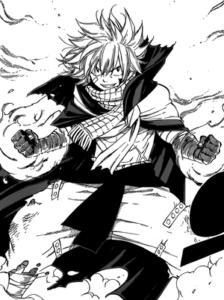 Natsu was never afraid to fight against stronger opponents than him. Even when clashing with those fearsome opponents. We saw him during the Alvarez Empire arc, and how reckless he became when he clashed against Zeref as he believed this would end the war as early as possible. 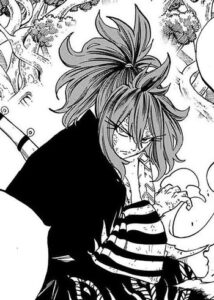 Suzaku is the fifth-generation dragon slayer and one of the strongest Dark Dragon Slayer Knights of the Diabolos guilds. Suzaku uses Sword Saint Dragon slayer magic that makes use of sword arts.

He obtained his power by consuming Kurunugi, one of Selene’s children, who was killed by Georg Reizen. During The Great Labyrinth arc, he confronted Natsu and teamed up with him to take down Dogramag. Sadly, he was defeated by the Earth Dragon God. 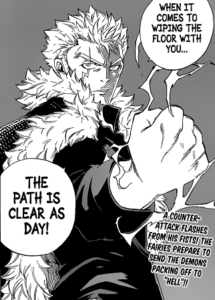 The former second-generation dragon obtained his power by consuming the power of the Lightning dragon’s lacrima. Laxus was a rebel in the Fairy Tail guild as he tried to become guild master by force. After his defeat at the hands of Natsu and Gajeel during the battle of Fairy Tail arc, he was banished from his guild by Makarov.

Later he arrived at Tenroujima Island to aid his guild against Grimoire Heart. Throughout the series, Laxus’s personality changed a lot, and he grew stronger as time passed. In the sequel manga, he fought against Erza and successfully managed to defeat her. During The Great Labyrinth arc, he sacrifices his dragon slayer magic to defeat Kirin. She is the mother of all dragon slayers as she was the one who sought dragon power to defeat the dragons. Unfortunately, she became a victim of the power as she slowly started to transform into a dragon. 400 years later, she became one of the members of Spriggan 12. Her power is off the charts as she toppled Erza with ease.

In the sequel manga, it was found out that before her death, she enchanted her personality into Wendy’s body. She uses Sage Dragon Slayer magic. 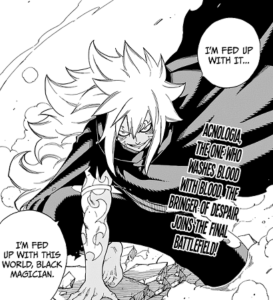 Acnologia is the strongest dragon slayer in the entire Fairy Tail series. To start with, Acnologia is a menace, as he was the one who came out top during the dragon festival. Most of the dragons became scared seeing his raw power. He annihilated Igneel at the cost of his arm. During the final arc, it took the collective efforts of all the wizards to take down Acnologia.

He is the guild master of the Magnia Dragon guild. Elfserisa uses Law Dragon Slayer magic. Currently, in the manga, it is unknown how strong he is.

He is the guild master of the Diabolos guild. Georg Reizen uses four beasts of dragon slayer magic. Selene annihilated him, so we cannot estimate how he would have fared against Natsu & co.

He was the strongest mage of Ishagar as he also went by the name of Eight Dragon God Serena. He was eradicated by Acnologia in the manga. But mysteriously, he somehow made his return in the sequel.

Here, we conclude our article on “All Dragon Slayers in Fairy Tail & 100 Years Quest”. We hope you like this post. We will be back with another article. Till then, stay tuned with us and read the articles below.