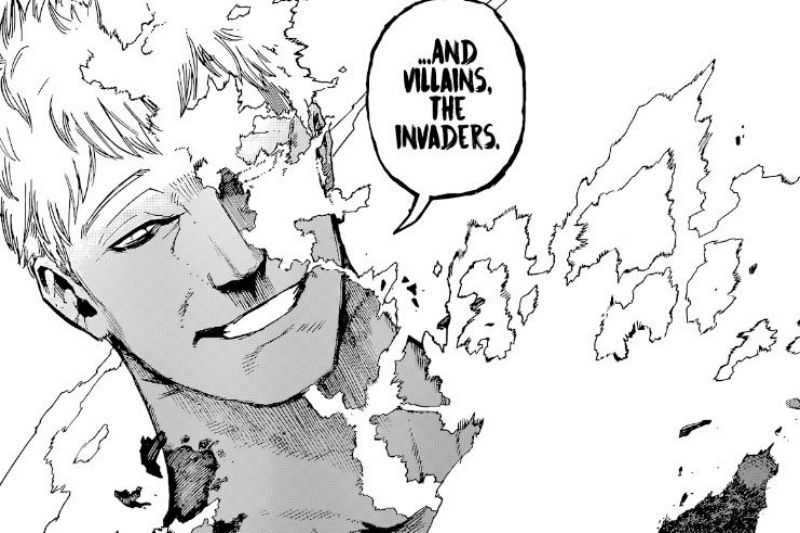 My Hero Academia Chapter 363 is out and has a lot of shocking revelations. The chapter continued the plot from the previous chapter’s cliffhanger- Bakugo’s condition.

Although even if fans saw his losing his life, they still had hope that the next might throw some twist to save him. But that didn’t happen. The latest chapter confirmed that Bakugo has no pulse and proceeded to show everyone’s reaction. Therefore, at this point, it seems impossible for him to be back alive.

Another twist the chapter had was that Re-Destro’s minion, Skeptic, is trying to hack the Hero Intelligence System from space. He confirms that he will keep supporting Shigaraki until he realizes their goals. Skeptic’s goals partially align with his, and therefore, he joined hands with them.

This revelation could mean that the flying objects that Midoriya encountered on his way could be this guy’s trick too. Additionally, we also see Dabi yell out to Skeptic, perhaps as a signal to begin his hacking. However, everything about their plan is unclear.

We also have to find out what exactly his plan is after hacking the system and how it will benefit Shigaraki and his team.

The latest chapter began with the U.A floating arena. However, a piece of shocking news awaited the fans as they read more into the chapter. Picking up from the previous chapter’s build-up, the latest chapter showed a lifeless Bakugo lying on the ground. Jeanist even confirms that Bakugo has no pulse and his heart is ripped to shreds. 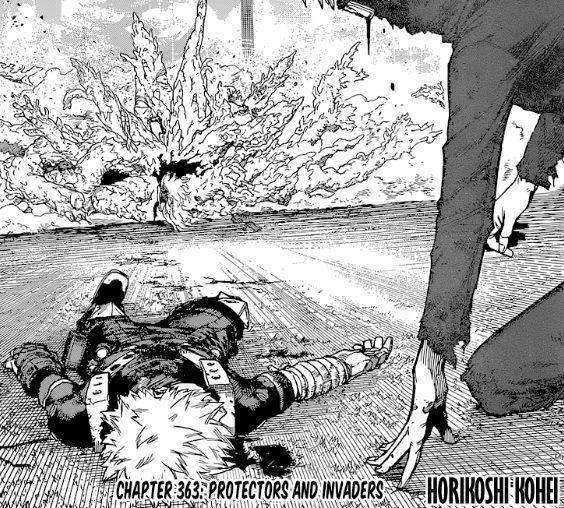 As everyone realizes his status, they are shocked and heartbroken. Togata recalls his determination to protect everyone from Shigaraki until Midoriya comes as he is dumfounded at the news. The chapter then shows us the reactions of everyone while they’re giving their best to protect what matters.

We also see Shigaraki mocking Erasure Head and others for being the cause of Bakugo’s demise. He mocks how they put too many responsibilities on the shoulders of kids; therefore, they’re bound to meet this end.

Even Mirko expresses her frustration as she admits she should have ended him in the past, and if only she had been faster, none of this would have happened.

So this seems to be the end for Bakugo for real. Except we only have one fan theory/prediction that Jeanist would try stitching his heart back. Although, this is a long shot since he has already lost his pulse. Unless Horikoshi really wants Bakugo in the game, nothing can serve as a plot twist to magically revive him.

Therefore, as per the latest chapter, Bakugo is gone for good.

So far, the fans’ were sure that Dabi has lost against Shoto. But My Hero Academia Chapter 363 revived Dabi with a new form. He has even more firepower now. He revealed that just when Shoto attacked him with his Ice attack, he managed to copy its technique and countered an equally massive fire attack. Therefore, what we previously saw was the collision of both their attacks. 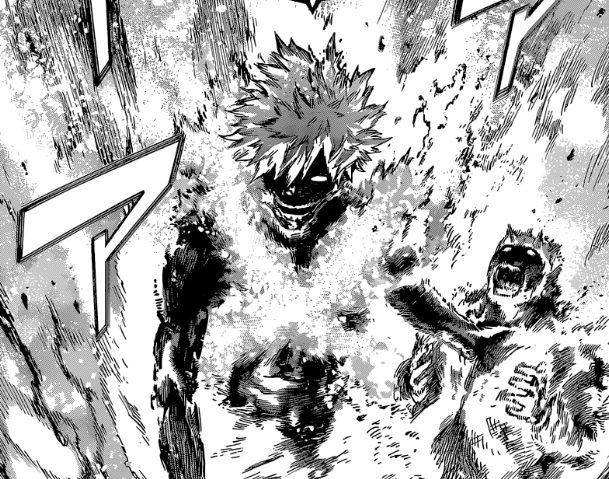 Dabi is even more determined now to cremate everyone, especially Shoto. He didn’t hesitate to toast Onima as he emerged from the flames with a new form.

In this form, Dabi’s entire body is charred, and his face only consists of its bone structure. His blue flames surround his body as if he is wearing fire armor.

My Hero Academia Chapter 363 revealed one of the major mysteries of the manga. The last panel of the chapter finally showed us AFO’s real face behind his mask. Turns out he has a strong face as well to back up his intimidating aura.

Although, the panel showed him fighting for his last breath. Therefore, we cannot be so sure yet if he will survive. At the same time, he is AFO, so we never know what secret trick he has up his sleeve.

Additionally, he also gave in to the resistance he has been facing from the vestiges of the users of the quirks he stole. Looks like Endeavor managed to defeat him for now since he’s lying on the ground and reflecting upon his ideology.

He goes on about how society is hypocritical and labels Heroes as the protectors and Villains as the invaders. These are the kind of thoughts the characters in MHA have before they take their last. So AFO might just be gone as well for good.

But considering all the hints and build-up regarding Eri’s bullet so far and other villains gaining the offense suddenly in the latest chapter, more plot twists are on the way. The latest chapter highlighted that the villains are now dominating the fight entirely, leaving the most powerful of the heroes helpless.

It is now even more suspenseful as to what’s coming next.

The next chapter will be out in just seven days, i.e., on August 28th, 2022, as per Viz. The manga follows a weekly schedule and releases a new chapter every Sunday. Therefore, for the next week, we do not have any break, and chapter 364 is on time.

Where to Read My Hero Academia Chapter 364:

My Hero Academia Chapter 364 is officially available on Viz and Shueisha since they are the official English publishers of the manga. Those sites offer you to read the three latest chapters free of cost. So, if you are regularly up to date with the manga, you needn’t look anywhere else.

Additionally, it’s best to create an account on either of these sites and add the manga to your reading list. This way, you won’t miss out on the latest releases since they notify you immediately. They also maintain a chapter schedule calendar along with a countdown for the next release.

Therefore, these sites are convenient and hassle-free. Ideally, you can experience the manga in its finest quality if you can afford to purchase a subscription to either of these sites. And if you do, you will be able to access all the chapters of the manga they offer and some more benefits.

We shall be back with the My Hero Academia’s next chapter’s discussion when it is out. Meanwhile, browse through and check out some interesting articles from us below.