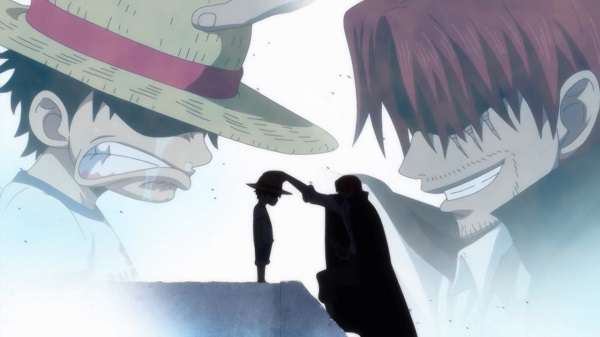 Shanks and Luffy met in Fusha Village, and the bond between these two is the pivotal part of the series. In the beginning, Shanks was the person who motivated Luffy to become a pirate. When Luffy says that one day he will surpass him, Shanks becomes happy and gives him his trademark Straw hat. During his conversation with Rayleigh, he tells him that Luffy reminded him of Captain Rogers.

But now, after the end of the Wano arc, Luffy finally became the Yonko and unlocked the full potential of his fruit. This leads to another debate among fans once again as they desire to know, “Is Gear 5 Luffy stronger than Shanks in One Piece?” or who will win in the fight between Shanks and Luffy in his gear 5 form?

The answer to the question is: Presently, Luffy in Gear 5 is slightly more powerful than Shanks as he defeated Kaido in one on one fight. He has the advantage of Mythical Zoan fruit abilities; however, his only weakness is swordsmen because they have the potential to injure him. So, here we can estimate that based on Devil Fruit’s abilities and raw strength, Luffy has the edge over Shanks, but if we compare them based on Haki, then Shanks is stronger. So the battle between these two would be neck to neck.

Later in the post, we compared both Shanks and Luffy based on every minor detail and concluded an unbiased result of their fight. So, let’s discuss.

Is Gear 5 Luffy stronger than Shanks in One Piece?

At present, Gear 5 Luffy is stronger than Shanks in terms of strength and abilities. But based on potential, they both are equally powerful. In the recently released One Piece Film: Red, it was shown to us that to defeat the final boss, both Shanks and Luffy have to attack at the same time. 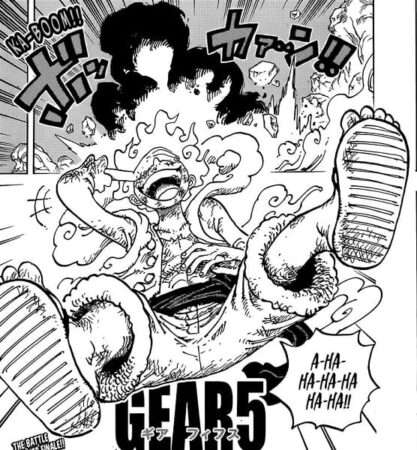 We witnessed that both Luffy in Gear 5 form and Shanks using his flaming sword, released the attack simultaneously. They destroyed that monster at the same time in the dream world as well as in the real world. It clearly demonstrates that they both are equally powerful. However, if we compare them based on manga, we know that Kaido, Big Mom, and Shanks were equally powerful.

There is no doubt that Shanks could defeat Kaido in a straight-on fight. However, Luffy in the Wano Arc defeated Kaido in Gear 5 with the help of Ryou. Therefore, in this way, we think Luffy is currently more powerful than Shanks or any other alive character in the One Piece series.

How Strong is Luffy now in Gear 5?

In Gear 5 mode, Luffy can defeat Kaido in a fair fight without anyone’s help. We can see that during the entire course, Luffy overwhelmed Kaido with ease as none of his attacks weren’t connected at all.

Luffy himself said that “I feel like anything’s possible now…” in Chapter 1044. It gave him unparalleled freedom in a way that defies common sense. Even the ones who were taking were affected as we have seen many were popping their eyes out. 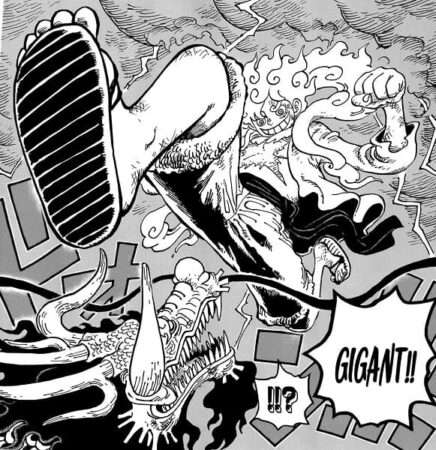 Moreover, Zunesha sensed Joyboy in Luffy. It indicates that Luffy has become equally stronger than Joyboy. However, in terms of experience, Luffy is still behind, but in our opinion, presently, he can surpass Shanks.

Luffy was taught all forms of Haki by his master Rayleigh. During the two years of his training, he learned all its basics. Over the course of his journey, he encounters many tough enemies and manages to strengthen his mastery of Haki to a certain degree.

It was revealed during the Wano arc that no matter what era is, the world government has always failed to acquire Gomu Gomu No Mi. Luffy’s Devil Fruit which was thought to be Paramecia is revealed to be the Mythical Zoan Hito Hito No Mi: Model Nika. It is said to be the strongest fruit in the history of the One Piece world.

How Strong is Shanks in One Piece? Power Level

Shanks is equally powerful to Big Mom, Kaido, and Blackbeard, which makes him currently the strongest emperor in post Wano arc. After the downfall of Kaido and Big Mom, Shanks is the one who has the highest bounty in the series presently.

Shanks is one of the most familiar pirates to us as he is closely related to Luffy. In the world of One Piece, he is most feared and targeted as a great pirate. Most of the time in the entire series, he spends his time as an observer. Shanks only makes his move when it is needed, especially to maintain the world balance. 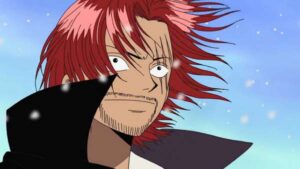 He easily refrained Kaido from entering the war and also, and he halted the war successfully between Marines & pirates. Shanks has a lot of influence and is well respected as he managed to convince Sengoku to hand over Ace and Whitebeard’s bodies.

He had also run in with Eustass Kid, who daringly challenged Shanks, resulting in costing him an arm and a leg too. The scars above his left eye tie his fate with Blackbeard.

All the admirals, including Akainu, feared Shanks the moment he made his move. This was again seen in the Wano arc as Aramaki immediately fled away when Shanks just used his simple Haki blast.

This made us believe that the marines, who did not back down to the likes of Whitebeard and Blackbeard, had to back down because of Shanks. Shanks might possess such qualities that the rest of Yonko didn’t. According to Gorosei, Shanks possesses such ferocity that if he were made to go on rage, he would be too much to deal with.

Shanks is as skilled as Mihawk in swordsmanship as he used to be his rival in the early days. Even after losing his arm, he still manages to hold on to his own against Whitebeard and Akainu. In One Piece: Road to Laugh Tale Vol 2, we came to know that Shanks’s sword name is Gryphon.

He uses a flaming sword whose power rivaled that of Monkey D. Luffy’s Gear 5 form as they defeated the final boss simultaneously in the film Red.

Shanks is one of the most feared emperors of the sea. Strength is one thing, but his crew is on a different level. He has got excellent leadership skills. His crew has made their own names around the One Piece world.

Luffy vs. Shanks: who would win?

Before the start of the Wano arc, Shanks was all way stronger than Luffy. But after the end of Wano, we witnessed how strong Luffy’s Gear 5 form was. As he can easily manipulate everything around him, giving him immense freedom while fighting. Also, Luffy’s determination and fearlessness lead them to stand out against Shanks in terms of strength.

Currently, in terms of Speed, Shanks is the victor out here as he is very sharp, witty, and quicker than Luffy. He can easily conceal his presence and can appear out of nowhere which Luffy cannot manage.

Shanks is easily the strongest based on Haki, as he mastered all forms of Haki. He is also known as an Observational Killer, thus negating Luffy’s use of Observation Haki. Also, Luffy is not as efficient in using Conqueror Haki, just like Shanks.

Luffy is more durable than Shanks. He might have become durable since his younger days during his harsh training given by Garp. After accessing Gear 5, he even manages to survive Kaido’s powerful Bola breath. During the events of Impel down arc, Luffy has developed immunity against poison.

Shanks is more experienced than Luffy as he was already a well-established pirate when Luffy started his journey. He is wiser than Luffy and also in using the abilities of Haki too.

During the climax of the Red movie, to defeat the demon king, Luffy and Shanks used their strongest attack in their arsenal, i.e., Gear 5 and Flaming sword, respectively. They destroyed the demon king simultaneously. Since they did not clash with each other, we cannot say who is stronger among both.

Right now, the answer is no. The fight between Luffy and Shanks happening is very low, but if it happens, then it would be heart-breaking for many fans. We have seen the pattern that Oda sensei might be slowly setting the fight between Shanks and Luffy as we witnessed that Bartholomew, one of the captains of the Grand Fleet, recklessly entered Shanks territory and burned the Red-Haired pirate’s flag. 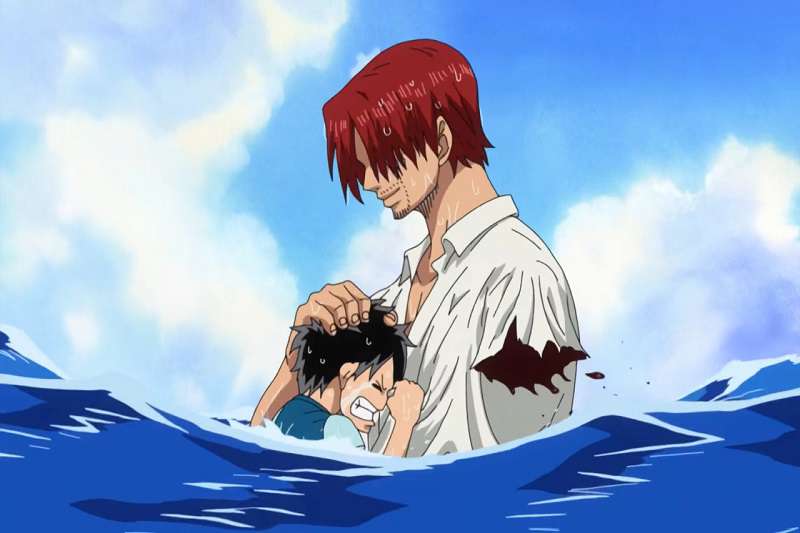 Therefore, we cannot exactly conclude who is stronger between Shanks and Luffy, but if we advance for Haki, it is Shanks all the way. But on the basis of potential, Luffy is way ahead of Shanks as he is the strongest.

So, this is it for today, folks! Here, we have concluded our article on “Luffy vs. Shanks: Is Gear 5 Luffy stronger than Shanks in One Piece? ” We will update once the story progresses further, as the story is in the final saga, and Shanks is going to reclaim his territory while Luffy and others are traveling toward unknown territory. We will be back with another article. Till then stay tuned with us.