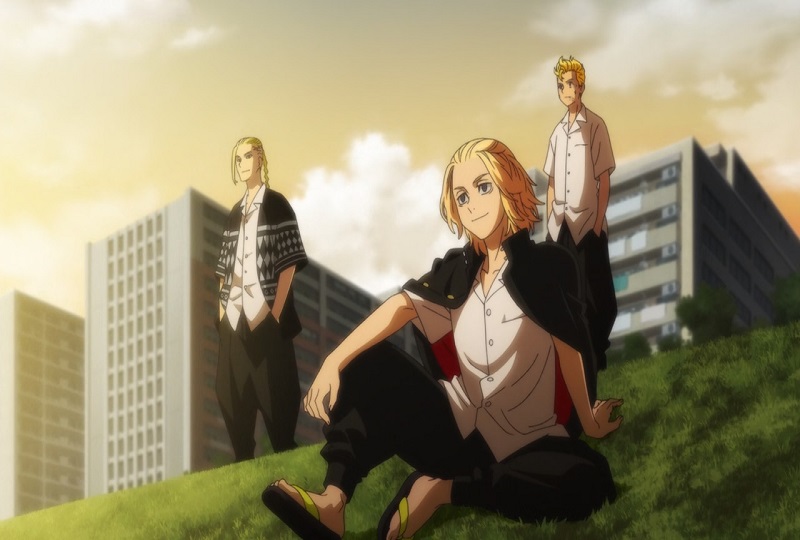 Tokyo Revengers is a successful manga which is written by Ken Wakui. It deals with the lives of Delinquents, and the story’s main focus is all the Gangs in Tokyo. The protagonist of the series is Hanagaki Takemichi, who is on a mission to save his girlfriend. On his journey, he also starts to save his friends, who evolved into an integral part of his life.

Currently, the story is in its final arc, and things have become exciting. As the stakes are very high, in the recent chapter, we have witnessed that Takemichi is getting the upper hand on his friend, the invincible Mikey.

Also, it was revealed to us that Mikey’s brother is the 2nd time leaper. Right now, almost all Gangs are introduced. Most fans want to know which Gang is the strongest in the series. Today in this article, we have ranked all the Gangs from weakest to strongest. 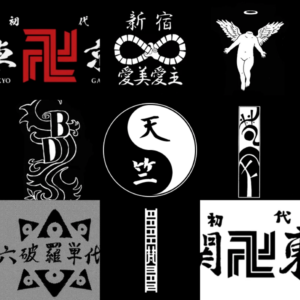 Also, we will show the Gang logos along with their names. We have ranked every Gang based on their strength & their journey throughout the manga and concluded an unbiased result based on that. So, let’s discuss. 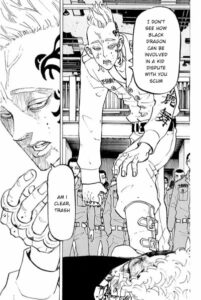 The weakest Gang in the entire series before him, the leader of the Gang, was Izana. Izana deliberately gave Madarame the leadership as he wanted to ruin Shinichiro’s legacy further. Shion Madarame was known for his ruthlessness and unwanted violence. He used underhand techniques and means to achieve his end.

Soon his Gang met its end when it clashed with a newly formed Gang, Toman. Toman, with only six members, toppled Madarame’s Black Dragon. His generation was stated as a disgrace to Black Dragon. Madame’s goal was to crush Mikey. 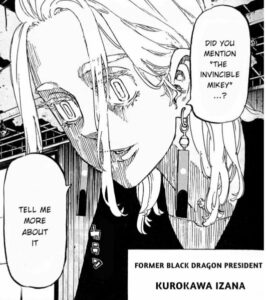 Black Dragon, which was started by Shinichiro, held its morals till the 7th generation. Izana became the leader of 8th gen Black Dragons. His main goal was to destroy Shinchiro’s legacy and whatever he built. It happened all because after knowing that he and Shinichiro are not blood-related.

He managed to ruin the ranks and tarnished the image of Black dragons, who used to be known for their high morals. This made his peers, such as Inui, dislike him for changing the dynamics of the Gang Soon; he was succeeded by his friend Shion Madarame who brought ruin to Black Dragons. 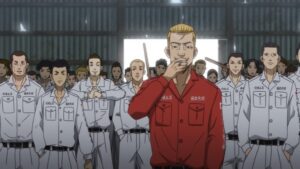 Moebius is the first Gang that Tokyo Manji faced in the manga. They had a confrontation with Toman as they beat Pah-chin’s friend mercilessly. This triggered the clash between the two Gangs. It was led by Nobutaka Osanai, who was himself strong as he managed to beat Pah-chin in a one-on-one fight.

He was quickly defeated by Sano Manjiro and was later stabbed by Pa-chin. Later the Gang was revived under the temporary leadership of Shuji Hanma, and once again, they clashed against Toman. They succeeded in stabbing Draken, but they were sadly defeated. Later it came to light that the Gang was controlled by Kisaki Tetta. 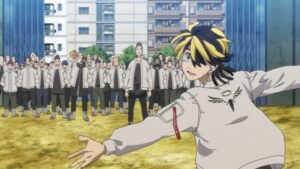 The Gang is also known as The Headless Angel. Valhalla’s main goal for the Gang was to make Mikey their leader. It was formed by Tetta Kisaki, who was running behind the background while Hanma Shuji was running in the front. The Gang was also joined by the former Toman Member Hanemiya Kazutora.

Kazutora was the killer of Sano Shinichiro, Mikey’s elder brother. To expose the real intention of Kisaki, Baji joined the Gang. Baji also wanted Mikey to forgive Kazutora for the past deeds he committed. The clash between Toman and Valhalla was inevitable.

The event was known as Bloody Halloween, which ended with the death of Baji. The Gang was defeated by Toman, and they were later merged with them.

The Gang is led by Keizo Arashi and dominates the west of Kanto. They were in a constant feud with Koudo Rengou. It was later absorbed into Black Dragon Gang.

The Gang was led by Wakasa Imaushi, which dominated the east of Kanto. They feuded aggressively with Ragnarok. Later both Gangs were absorbed into Black Dragon.

After falling into ruins because of Shion Madarame, Black Dragon 10th Gen became nearly impossible for Black Dragon to revive. Inui recruited Taiju Shiba and elected him as the leader of the Gang. Taiju revived the Black Dragon Gang to its full glory. But he did not make any efforts to undo what Izana had done.

Just like Izana, he used violence as his means to achieve anything. This thinking changed when he clashed with Takemichi. During the Christmas conflict arc, Takemichi, Chifuyu, Mitsuya, and reformed Hakkai clashed against Taiju. They managed to push back the Gang as Takemichi’s punch bought Taiju to his knees. With the arrival of Mikey and Draken, the Black Dragon Gang was completely defeated. 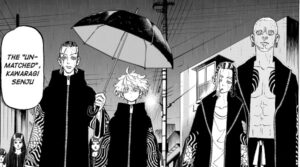 One of the Three Deities who made their prominence during Tokyo Sengoku’s period. The Gang mainly consists of 1st gen Black Dragon. They wanted to bring down Sano Manjiro as they taught his Gang’s ways were wrong. Just like Sano Shinichiro, Senju was always against dirty business. They get their source of income through holding underground fighting matches.

After the clash of the three deities, the Gang was disbanded, and Senju joined Toman 2nd gen while Waka and Benkai joined Kanto Manji. They might have joined the Kanto Manji on the orders of Sano Shinichiro as he is revealed to be the 2nd Time Leaper. 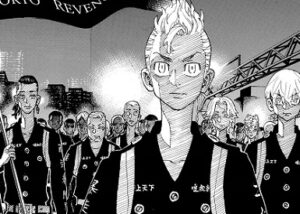 After his failed attempt to stop Mikey from his doomed destiny during the Three Deities war, Takemichi was beaten to the pulp by Mikey and was admitted to the hospital. At first, he was adamant about taking help from his old friends. After getting motivated by his girlfriend Hina, he gathered the ex-member of Toman gen one and formed his Gang.

The sole purpose of this Gang is to defeat their friend Mikey who is now leading the most powerful Gang in Tokyo. The battle took place in Cargo Bay. The fight was one-sided as Kanto Manji had overwhelming members compared to Toman gen 2. But the battle soon turned favorable to Toman as, one-by-one officers were getting defeated.

Also, thanks to the betrayal of Koko & Kakucho and the arrival of new 6th division captain Taiju Shiba, they managed to overturn the lost battle. Finally, both the captains clashed against each other, and Takemichi managed to punch him thanks to his improved visions. 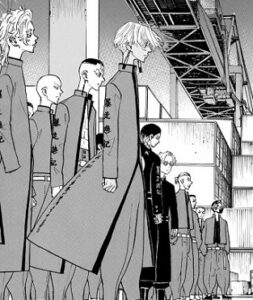 After another failed attempt to take control of Toman, Kisaki met Izana and made him make Tenjiku crush Toman. Since his childhood, Izana has been jealous of Mikey and wants to get his revenge on him. Tenjiku Gang comprised of S-62 generation also including Kakucho, Kisaki, Hanma, and Sanzu to their ranks.

Izana used underhand techniques to defeat Toman. First, he sent all his officers to take down Captains of Toman, which they managed successfully. Later, to demoralize Mikey and Draken, they eradicated Emma Sano. With no hope of winning, Toman was discouraged, but Takemichi took charge of the Gang on behalf of Mikey.

Without any support from captains, Toman manages to push down Tenjiku to a very extent as Takemichi refuses to bow down during the entire incident. The clash between these two Gangs came to be known as Kanto Incident. The fight took a twist when Mikey and Draken entered the fight after knowing about Takemichi’s time leaping abilities.

The clash ended with Mikey and Izana fighting one-on-one, where the former emerged victorious. The incident ended with the deaths of Izana and Kisaki. 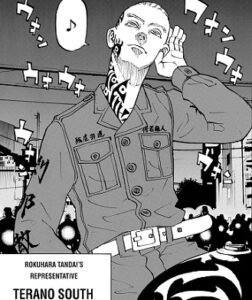 The second strongest Gang of the three deities is led by Terano South. The Gang is more violent than Kanto Manji and Bhraman. The Gang consists of former members of Tenjiku whom South met during his time in the Juvenile center.

After the death of Draken, he immediately launched the attack on Bhraman. This led to a clash of three deities which ended up with South’s demise and the rest of the Gang members becoming part of the Kanto Manji Gang. 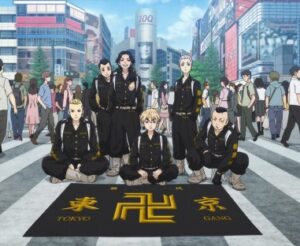 Toman 1st Gen came to power after defeating the 9th gen Black Dragon. The Gang was led by Sano Manjiro, also known as The Invincible Mikey. It was one of the most powerful Gangs during the pre-time skip.

It defeated Mobeius, Valhalla, Black Dragon, and the Tenjiku Gang and became the No.1 Gang in Tokyo. To protect everyone, Mikey disbanded the Gang when it was on top. 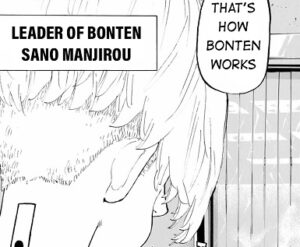 The Bonten Gang is one of the most feared Gangs in Japan. It is one of the most notorious Gangs which is involved in every sort of dirty business. Even the cops aren’t able to get any information on them. They show no mercy towards any traitors. 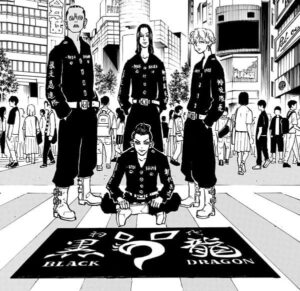 Black Dragon Gen 1 is one of the strongest Gangs, which was founded by Sano Shinichiro. Before their disbandment, this Gang was number 1. It had members like Waka, Benkai, and Takeomi. They were strong during their prime.

Currently, in the latest chapter, it was revealed that their leader is the second-time leaper. This Gang was known for having high morals. 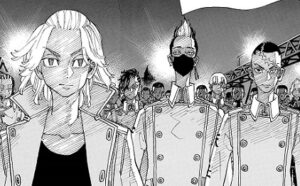 After emerging victorious during the battle of three deities, many top members of Bhraman and Rokuhara Tandai joined the Gang. They were also able to get Hanma on their side.

Currently, the Gang is on the verge of losing against Toman, Gen 2, led by Hanagaki Takemichi.

Here, we conclude our article on “All Tokyo Revengers Gangs Ranked (From Weakest to Strongest (2022)”. Next, we have a little FAQ section to answer some of the most asked questions.

Q1. Which one is the strongest Gang in Tokyo Revengers?

Ans. Kanto Manji Gang is the strongest Gang in the Tokyo Revengers.

Q3. Who is the strongest Gang leader in Tokyo Revengers?

So, this is it for today, folks! Here, we have concluded our article on “All Tokyo Revengers Gangs Ranked (From Weakest to Strongest (2022)”. We will update once the story progresses, as the story is in the final arc where we learned about the 2nd time leaper during the climax of the fight between Takemichi and Mikey.