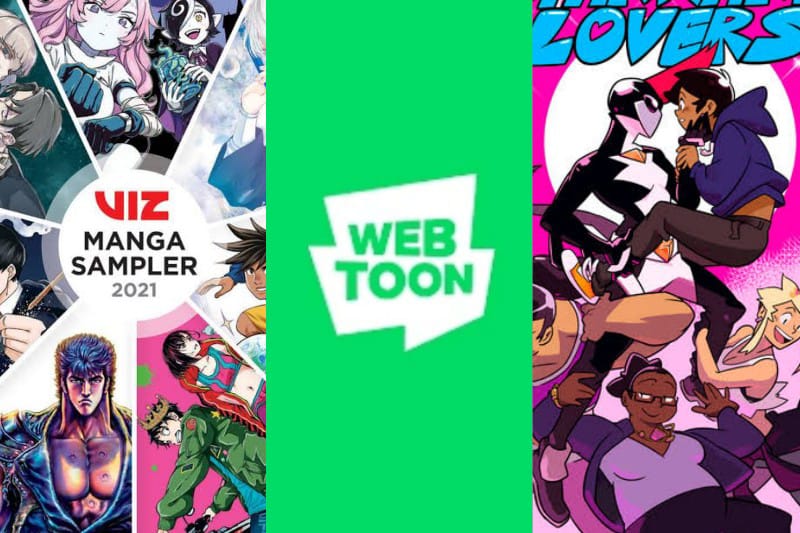 In the anime community, we frequently hear words like webcomics and webtoons apart from manga. After the success of webtoons like Solo Leveling and the God of High School, we are now aware of these visual media. But what are the differences between these? Let’s discuss this in this article Manga vs Webtoon vs Webcomic: Which one is better? 2022.

In this article, we will discuss the history, the differences in style, and what are the current trends in MANGA, Webtoon, and Webcomic.

So, without further ado, let us jump right into this article Manga vs Webtoon vs Webcomic: Which one is better? 2022

Major Differences Between Manga vs Webtoon vs Webcomic

Some of the main differences between mangas, webtoons, and Webcomics is their source of origin. Manga originated in Japan, and it refers to comics made by Japanese creators in the Japanese language.

Webtoon, on the other hand, refers to comics that originated in South Korea by created by South Korean creators. Webcomics came into existence over the internet, made by creators solely for online mediums.

But Webcomic has become a kind of an umbrella term for any comics originating over the net. This is why even Chinese Manhua and sometimes even mangas or Korean manhwas are called webcomics if they are in digital form.

Parallel Histories of Manga vs Webtoon vs Webcomic

Manga originated much earlier than the other two categories, as its origin dates back to the 12th century. However, the term came into existence in the late 18th century after Santō Kyōden’s picture book Shiji no Yukikai was published. But it was Rakuten Kitazawa who used the term manga as we know it.

But, it was after World War II that manga saw rapid growth in its approach and style. Even though the allied forces enforced censorship over art and written texts that glorified war, it could not stop the publication of manga.

Later the Japanese constitution lifted all forms of censorship, which helped in the growth of artistic creativity in mangas. The most prominent creators, also known as Mangakas that emerged in this era are Osamu Tezuka and Machiko Hasegawa. Their works, Mighty Atom and Sazae-san, respectively, became successful and were the cornerstone of the current booming manga industry.

To understand the history of Webtoon, we first need to know a few things about Manhwa. They are a result of Japan’s occupation of Korea. Being influenced by their culture, Korea started to create political cartoons in retaliation to the Japanese occupation, and since then, it has gained fame in Korea.

This Manhwa was then transferred into a digital comic format meant to be read on your smartphones or computers. And it first originated in the mid-1990s when independent creators uploaded their own comics.

This changed when Lycos Korea launched a portal, Manwha Bang, and other companies like Yahoo Korea and Daum followed suit. Now, Webtoon is enjoying not only national but also huge international popularity.

Webcomics emerged when the world saw an advancement in the arts sector over the internet. The first comics ever created date back to 1985 by Eric Millikin, who created Witches and Stitches and uploaded them on CompuServe.

Though the market of webcomics originated in America, it became successful with the introduction of Korean and Chinese comics. Korean companies such as Naver corporation and Tapastic started their app and gave platforms to creators from every background to start their webcomics, rejuvenating the western comic sector.

Visual Differences Between The Two Formats

There are also many visual differences between manga, webtoons, and Webcomics. Most importantly, if we consider Japanese manga, then we can see that it is supposed to be read right to left and top to bottom. But Webtoons and webcomics read left to right and top to bottom.

Mangakas mostly draw manga in a black-and-white format. Even though there are some colored mangas, they are not as popular and not as widely known. You can find one or two color pages at the beginning or the ending of the manga chapters as illustrations.

There is also the fact that Japanese mangas either come once a week or once a month. Some mangas even take longer than that to release chapters, depending on the health and intention of the creator. Every chapter then gets merged into volumes which are also known as Tankoubon.

Manga has always existed in a format of a traditional comic. But it is only recently that more digital mangas are surfacing. This happened because the manga did not want to lose out on the emerging world of digital comics.

Even though they took their time to appear in the market, they took hold of it quite quickly. Now there are many apps and websites where you can easily find manga. But that doesn’t mean there are no published formats; anyone can access mangas in both forms.

Manhwa took to the digital format pretty easily. So much so that manhwas on paper rarely exist anymore. Creators primarily print their work on the web as it is more convenient for them. It also helps in the growth of its popularity, and even international audiences can read it easily.

When manhwas got a digital platform, they adopted the name Webtoon, and since then, they have been in demand. Webtoons mostly come in long strip format, and they come in color.

Most manhwas used to be black and white, just like mangas, but after they took a digital form, creators started to make them colorful to appeal to the readers more.

Webcomics includes any comic on the internet, including Korean webtoons and Chinese manhuas. They also follow a similar format to webtoons, come mainly in color, and a single chapter can come out in a week or a month. For both webtoons and webcomics, creators can take a break to recontinue their comics after some months.

Current Trends In Manga vs Webtoon vs Webcomic

Manga and webtoons have different demographics that appeal to different kinds of people. Manga especially has many genres such as shoujo, shounen, harem, josei, seinen, etc.

The best example of the shounen genre would be Naruto, one of the most popular manga ever. It also includes eminent names like Dragon Ball, One Piece, Attack on Titan, etc.

A recurring theme of these mangas would be to have a male protagonist who achieves his goal after going through many trials and tribulations. His friends are the ones who will support him and help him throughout his journey to achieve his dream. He would also have to mature by fighting many enemies.

Similarly, in the shoujo genre, there will be a female protagonist. It can also have action like Sailor Moon, but it is also very invested in the romance sector. Comedy and slice of life are also recurring themes in this genre. Some of the most famous shoujo mangas include Fruits Basket, Kimi ni Todoke, Ao Haru Ride, etc.

Fore webtoons, it becomes pretty much a one-man show. It tends to showcase the journey of an individual who relies on him or herself. They do get some outside help, but mostly they work as lone wolves.

So, we can often get a dynamic and overpowered main character from webtoons. Some great examples of webtoons would be Solo leveling, Unholy Blood, and Omniscient Reader.

Webcomics can have a wide variety of themes. It entirely depends on its creator, and as the creators come from all backgrounds, it can have many influences.

Even mangas and webtoons influence these comics. Some great examples of webcomics are Owl Turd Comix, Safely Endangered, Extra Fabulous Comics, Toonhole, etc. Currently, the most entertaining Chinese webcomics include The Ravages Of Time, The Legend of the Sun Knight, The King’s Avatar, Doulou Dalu, etc.

At the end of the debate, the differences boil down to the appearance and origin of these comics. But something is constant in all of them, their great storylines and ability to hold the reader’s attention. All are great in our opinion, with no need to rank anyone better than the other.

Their popularity became so vast that many became the source of TV adaptations. Attack on Titan has its own movies, whereas webtoons like True Beauty enjoyed success as inspiration for a hit South Korean series. If you are an avid reader and enjoy reading quality content, read these comics and support the artists.

Great platforms to read mangas are Viz and Manga Plus by Shueisha. For webtoons and webcomics, head to the app Webtoon, Tapas, Lezhin, Webcomics, etc.

With that, we end this article on Manga vs Webtoon vs Webcomic: Which one is better? 2022. Stay tuned for similar posts about your favorite anime, manga, Manhwa, Webtoon, etc.