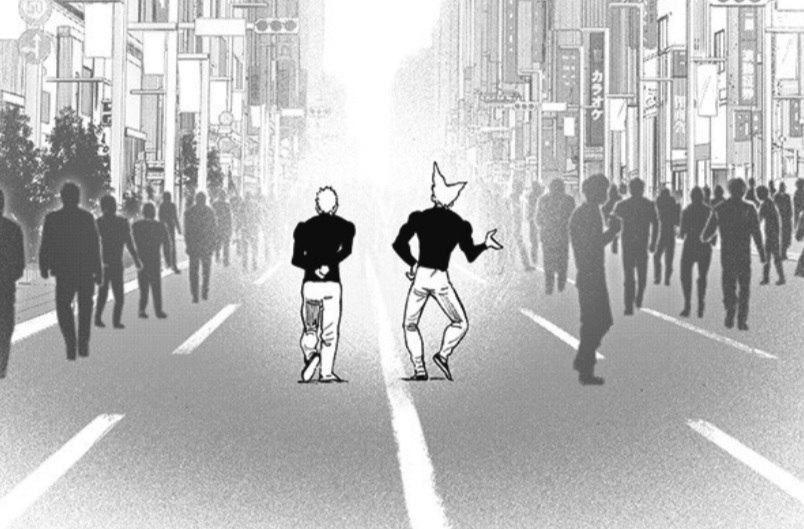 Firstly, there is a difference in the numbering of the official and unofficial chapters. This is because Murata chose to over-write chapter 164. The unofficial numbering continued after chapter 164, and therefore, the current chapter is numbered 170.

However, Viz decided to combine two chapters as one and continued the numbering that way. Therefore, as per Viz, the current chapter is numbered 169.

The Aftermath of the Monster Association Arc 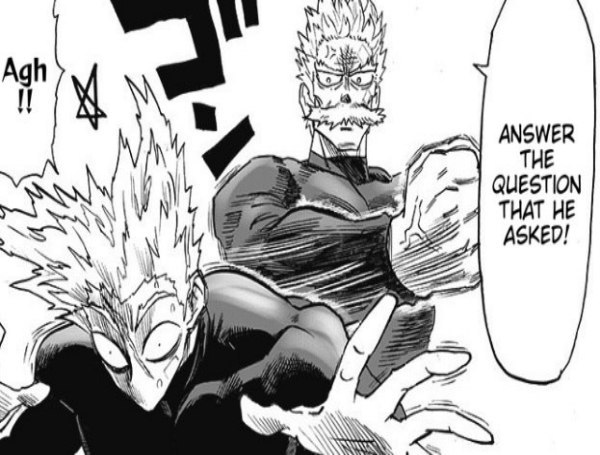 We got a whole chapter showcasing the aftermath of Garou and Saitama’s battle. So, it cleared out most of our questions, starting from the whereabouts and status of Garou. Turns out he used Metal Knight’s grand entry as a distraction and escaped to one of the secret training grounds of Bang. And luckily, Bang managed to find him after looking for him everywhere. And so began Garou’s rehabilitation.

Initially, the chapter begins with Bang bringing Garou to the police station to rectify his dine-and-dash incident. Therefore, Bang stayed true to his words and is now dragging Garou to every place he caused damage.

Meanwhile, we also see Tareo living his life. He proudly plays the role of “Garou-man, the hero” while his friends are confused and bitter about it; they see Waganma calling out to him amidst their argument. Tareo’s friends are in awe and shocked to find that he is friends with the rich heir.

So, all in all, everyone is slowly going back to living their normal lives.

Another vital fact to note here is that after the future, Saitama punched away the God powers out of Garou; it undid his Monsertification and the techniques he learned during it. Therefore, Garou is now at his base form and is even trying to explore his “ultimate fist.” He has no memory of his fight with Saitama on IO or even that Saitama is the one that punched him during his grand speech about becoming “absolute evil.”

Therefore, the next arc will show Garou’s true potential as a human being and the new techniques that he will master.

Bonding between Bang and Garou

One Punch Man Chapter 170 highlighted Garou’s bond with Bang. Even if they don’t admit it, they both care about each other, especially Bang. For him to give up his hero career just to make sure his disciple is on the right path says a lot. Similarly, deep down, Garou does look up to Bang since he is the primary fatherly figure in his life.

Their bond is further highlighted when Bang makes an effort to get to know him better. Since he is underage, going for a drink is not an option. Therefore, alternatively, Bang suggests they sit down and have a nice chat. He even asks him if he is into anyone, to which Garou gives a hilarious reaction as they carry on with their walk through the city.

Current situation of Saitama and Genos 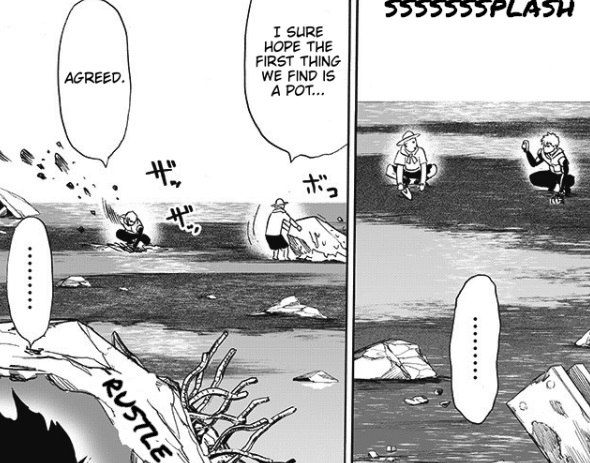 As Saitama said in the previous chapter, he and Genos are looking for whatever is left of Saitama’s house. The panel showed them in beach outfits, rummaging through debris. However, the key point to notice here is that they aren’t alone. The panel vaguely shows a character lurking around them at a distance. It is most likely Rover is looking for an opportunity to be a part of Saitama and Genos’s circle.

Also, Genos now has stunning and bright red body parts. This means Genos is now all fixed up and possibly has some new cool moves. As for Saitama, he is immune to radioactive poisoning, so there is no need for him to get some sort of treatment as such.

Retirement of Bang (who will fill that gap)

One, the manga will be on a one-month break. After working tirelessly to give us amazing chapters back-to-back, they deserve a break. Therefore, we shall wait until they are ready to jump back into their craft.

Two, One Punch Man season 3 has officially begun production. This news was announced in One Punch Man Chapter 170 itself with a stunning colored page. Therefore, fans’ excitement is skyrocketing to space.

Since the production has begun, we can expect the first episode of Season 3 to air either by the end of this year or directly in 2023. However, the official release date is not out yet. So, we better be on the lookout for it. 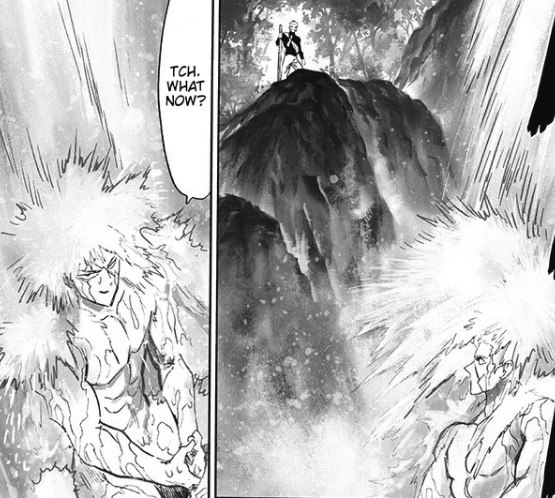 Considering the story so far, it is quite evident that the next villain/antagonist of the series will be God. There’s barely any information about this omnipotent entity, its motive, and its final goal. Therefore, the next arc will be full of epic fights and plot twists.

Another point to note is that manga has entered the concept of the multiverse. Given how the last few chapters were tightly knit with Quantum Mechanics, the new arc, too, will introduce Murata and ONE’s complex and mind-blowing take on these concepts. Therefore, the following arc will widen the scope and scale of the manga.

Additionally, the manga has dropped a lot of hints about the upcoming plot. With Bang’s retirement, someone will have to fill the gap. We also have to see if the future timeline (Saitama vs Garou on IO) will ever be revealed to anyone else apart from Genos. He did mention that the world needs to know about Saitama’s power and all the times he saved humankind. Although, that is quite unlikely and against the plot rules of the manga.

Another hint is that we may get to see Orochi and Tatsumaki. Fans suspect that Orochi might be back in some other form and will make a comeback. Although, this is a long shot and may only happen after a lot of chapters.

As for Blast, the manga confirmed that a war has been going on in other verses since he and his team are constantly on inter-dimensional missions. Therefore, it is the vital key point of the entire upcoming arc.

Where to Read One Punch Man Chapter 171

One Punch Man is officially available on Viz Media and Shueisha. Both the sites offer you to read the latest chapter free of cost. They also maintain a schedule calendar of most of the manga along with the new chapters’ release dates. Therefore, look nowhere else and follow the manga on either of these sites.

More importantly, the manga is also available on ONE’s official site. So, it’s best to read the manga there and support them. Therefore, if you regularly keep up to date with the latest chapters of One Punch Man, it’s best to create an account on these official sites and add the manga to your reading list. They also notify you when the new chapter comes out so that you don’t miss an update.

We hope we have covered everything about the latest news and updates of the One Punch Man manga and anime. We shall see you again in case any more news pops up. Meanwhile, browse through and check out some more interesting articles from us below.