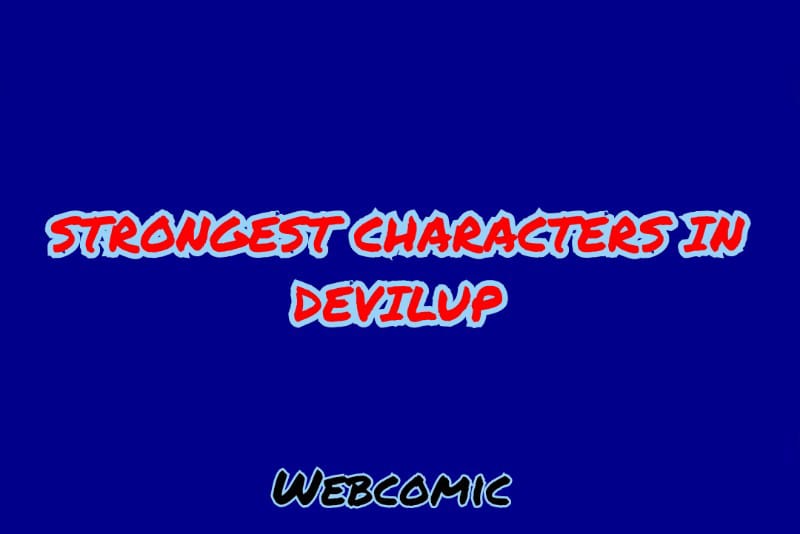 DevilUp is a webcomic of fantasy, action, and romance genres. It was first published on 3rd July 2021, and jougo_chihaya is the animator and the writer of the webcomic. It’s currently an ongoing webcomic with a moderate fan following.

DevilUp has quite some strong characters, some of whom are evil and some good. This article talks about the strongest characters in DevilUp webcomic. DevilUp currently has around 24 chapters ongoing, with more to come.

Silas Reinhart is the main protagonist of the story. Silas Reinhart was born with the god-gifted power of the stars and could’ve easily trained to become better and stronger.

Yet, he chose to live a simpler life and have pessimistic behavior. He is often seen as a person who prefers to live a hassle-free life without any struggles. This resulted in his village being completely wiped out by demons which he could’ve easily prevented if he had trained hard enough.

Silas was also seen blaming the Harlem Heroes for not showing up when his village was being massacred by demons, showing his pessimistic side. This puts him last on the list of strongest characters in DevilUp webcomic.

Remi is Cedric’s younger sister and one of the survivors of the attack on her village. She has been blessed with healing powers by the gods, which are seen as very useful in the webcomic.

Yet, these powers are not good enough to be used in combat as an offense, hence putting her second last on this list. She is seen as a very caring person who always tries to help people out and handle situations as peacefully as possible, making her suitable for her powers.

She is also seen as loving as a younger sister who is always trying to help her brother out.

Enzo Darcelle is a character who has been blessed by the star of supernatural hearing. He is also a psychotic killer who was in prison for years until his village was not attacked.

It is shown at first that his supernatural hearing often makes him hear things no one would like to. This, later on, converts to constant blabbering in his head, which later on becomes the reason for his psychosis.

Cedric is his older brother of Remi and also a survivor of the attack on his village. He has been blessed with the power of the star, which increases his strength levels to superhuman strength.

He is seen as a bold, kind, and strong character who never fails to put up a fight to protect his loved ones. Even though kind, he is often seen to be prideful of his strength.

This can be seen when he rejects the help offered by one of the Harlem Heroes to protect his village. This results in him failing to save his village and running away for refuge.

Lord Raine is a villainous character who appears in the 8th chapter of the webcomic. He is considered the goblin king and the strongest demon on earth. He is a merciless character who yearns for power and control over the world in his life.

His strength can be seen in the fight between him and Cedric, where he easily overpowers Cedric without shedding a drop of sweat. He had been trapped in an amulet by a wizard thousands of years ago. He is later freed along with his goblin army by Enzo as Enzo thinks Raine would favor him after getting free.

Silas Reinhart is later sent back to earth as a devil’s spawn after he signs the contract with Lord Alastor. He starts as a low-level spawn, but his strength keeps on increasing as he takes more and more lives.

After taking the lives of many goblins, he finally achieves strength and speed to be able to easily overpower Lord Raine. Silas had signed that contract as he was deluded into believing that his lover, Mia, could be saved. This makes him the 3rd Strongest character in DevilUp webcomic.

Lord Alastor himself is a God who was banished to hell. Hell is a place that only runs on incoming souls which are brought by his spawns. Alastor is second on the list of strongest characters in DevilUp webcomic as he is the God of all demons and monsters and runs hell.

He can only be present on earth in his spiritual form, but his powers are very much visible in the vicinity of hell. He is pretty strong and massive in size with various supernatural abilities such as magic, illusions magic, etc. Alastor is also seen as a cunning character who can manipulate people to get his needs.

Harlem Heroes are the heroes or the “protectors” of the kingdom of Harlem. They have been blessed with the power of the strongest stars by the gods themselves.

These are heroes who have trained themselves to superhuman levels and can easily defeat any demon or monster. They all have been blessed with various powers and are specialized in these powers.

The webcomic hasn’t specifically shown them in action, but from the way they have been talked about, it can be concluded that they are the strongest breed of humans on earth who can overpower anyone.

DevilUp shows a peaceful kingdom of Harlem. The demonic gods of hell, later on, attack the Harlem kingdom. Many of the villages of Harlem Kingdom are attacked by these demons, with all the villagers getting massacred.

Silas Reinhart was a villager who was blessed with the power of the stars. Yet, he chose not to train himself to make himself more robust and better. He is killed along with the entire village and later sent to hell, for which he blames the Harlem Heroes for not showing up.

He is, later on, offered a deal with Lord Alastor that he could be sent back to earth, but he will have to collect souls as a devil’s spawn.

DevilUp is a webcomic being written and animated by jougo_chihaya since 2021. It is ongoing and currently available on various websites over the internet, such as voyce.me.

Here, we conclude our article on “Top 8 Strongest characters in DevilUp Webcomic Ranked.” We hope you like it. We will be back with another webcomic post. Till then, stay tuned with us and read the articles below.