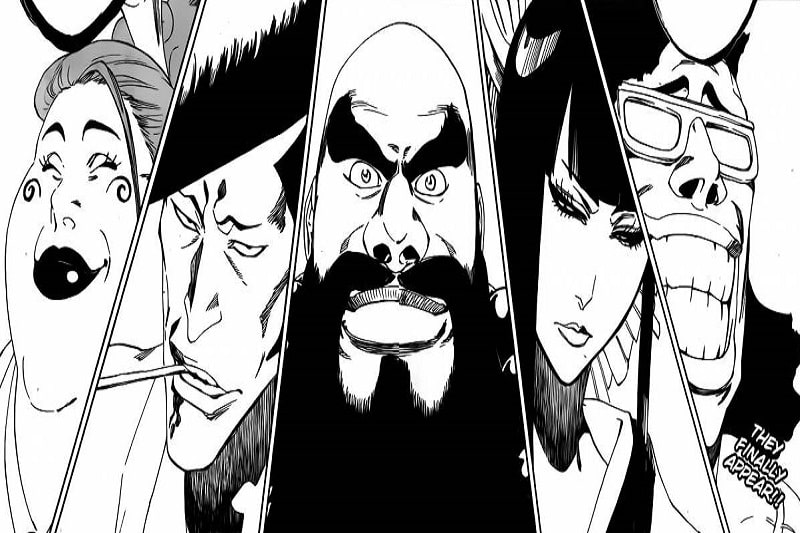 Currently, Bleach is enjoying massive popularity after the first episode of the 1000-year blood war arc anime started to air. The franchise, which was very silent these past ten years, has suddenly come into the spotlight thanks to its anime. The fight between Soul Reapers and Sternritters is starting to heat up in the anime, and Sternritters have finally launched their assault on soul society in the previous episode. So, today we are going to discuss “Bleach: Squad 0 (Zero) Royal Guards | All Information Explained.”

What is Squad 0 (Zero) in Bleach (Royal Guards)?

Squad 0, also referred to as Royal guards, are the ones who reside in the palace of the Soul king. Their primary duty is to protect the soul king, soul palace, and royal family and to eradicate menos. The interesting fact about them is that they have zero soldiers and all five members are captains. It is said that the power of Squad 0 easily surpasses the combined power of all 13 squads together.

Their sole duty is to protect the king and never interfere in Gotei 13’s problems. It was especially seen in the case of Aizen, who was leading an army of Arrancars.

They made their official appearance at the end of Chapter 516. They arrived after Gotei 13 was badly defeated by Sternritters which cost them the life of their Captain-Commander Shigekuni Genruysai Yamamoto, as we know that they never interfered in the affairs of Gotei 13.

This made fans curious about what made them suddenly make a move. They especially appeared to take Ichigo Kurosaki, Rukia Kuchiki, Renji Abarai, and Byakuya Kuchiki to heal and train them for the upcoming fight against Sternritters.

Captain of Squad 0 (Zero) in Bleach

Ichibe Hyosube is the captain of the Royal Guards where he holds the title “Monk Who Calls the Real Name”. He was the person who chose the names for everything comprising the names of their sword in their respective release forms.

Ichibe is the first ever soul reaper whose sword evolved even further, known as Shinuchi. He is one of the five war potentials Yhwach  wanted to personally recruit in the Wanderich army.

Ichibe earned his spot due to his wisdom and a huge amount of knowledge added to his experience, allowing him to create various strategies to strike down his opponents.

His Zanpakuto is Ichimonji which looks like a paintbrush that is very large in size. His sword generally uses to cut words which allows him to reduce the strength of his opponent.

When he releases his sword i.e., in his Shikai form, his sword’s tip turns into a sharp blade which releases black ink, and whatever the black ink touches that particular thing loses its name forever.

His sword’s final form is known as Bankai which he referred to it as Shinuchi. His final form of the sword is called Shirafude Ichimonji. Its power is to rewrite the names of the things which have been previously removed by his sword during Shikai form. His bankai looks like a giant brush which is colored white.

All Members of Squad 0 (Zero) Ranked (Most Powerful)

Senjumaru Shutara is one of the five captains of Squad Zero where the title “Great Weave Guard” has been bestowed upon her. She commands the fourth division of the Royal guards and she is the “Divine General of the North” at the soul king’s palace.

Senjumaru looks very beautiful but a bit skinny. She has fair skin, beautiful black hair, and jewelry behind her back. Despite her looks, she is a bit mischievous, and when she first appeared she makes fun of Mayuri Kurostuschi.

She has a large amount of spiritual power and the ability to travel from one place to another since she has a soul king’s bone inside her.

She can make any form of clothes currently her Bankai and Shikai have not been revealed. Senjumaru was the one who made clothes for Ichigo, Renji, Rukia, and Byakuya during their stay in Soul King’s palace.

Kirio is the former 12th division captain under whom Hiyori served as her lieutenant. She was chosen to be one of the five royal guards at the soul king’s palace so she quickly left her spot and was succeeded by Kisuke Urahara.

She commands the second division of the Royal guards, and she is the “Divine General of the South”. Kirio has been given the title “Ruler of the Grain”.

When she made her first entry, she looked fat and chubby and was a very older woman, but her true form had a very youthful appearance. She looked very beautiful and skinny along with beautiful pink hair.

Like Senjumaru, she has immense spiritual power and is a specialist in using Shunpo. Kirio is a master chef who cooks to create life. The one who eats her food his Reiastu gets increased.

Oetsu Nimaiya is the third division captain of the royal guards who commands the position of “Divine General of the West” as well. He has been given the title “God of the Sword” as he was the one who forged Ichigo’s sword, thus granting him the dual blade.

He looks very dark in color and looks thin. Oetsu is easily recognized by his trademark blue glasses, which he wears throughout the series.

Kirio Hikifune once said that Oetsu Nimaiya is an incalculable name as most of them cannot say what he thinks. By his appearance, he always looks pumped with tremendous energy and is the liveliest guy out of the five royal guards.

But we cannot go by his appearance when Yhwach invaded the soul king’s palace his mood suddenly changed and became a completely different person.

Oetsu became a demon and did not show any mercy to the Quincies who invaded. He clashes with Askin but sadly gets trapped by his power.

His sword name is Safayushi and like other captains, his Shikai & Bankai have not been yet revealed. He is the creator of Zanpakuto, as he has got the greatest understanding of it. It was only because Ichigo was forced to learn about his origins.

Tenjiro Kirinji is the first division captain of the royal guard, a healing specialist. He commands the position of “Divine General of the East”. The title “Hot Spring Demon” has been bestowed upon him.

He is lean, very tall, and has a large black pompadour. Tenjiro has his trademark small sticks, which he constantly chews upon. Unlike other squad members, he wears a white jacket instead of the standard soul reaper uniform.

Tenjiro generally sees Gotei 13 as a problem child, and he always tries to show them his superiority, even including the captains of each squad.

He had a lot of confidence in his ability that when Ywach invaded the Soul King’s palace, he directly confronted him and daringly told him that he wouldn’t stand up to him if he didn’t think his victory was possible.

When he made his first appearance, he tried to intimidate captain Unohana but was quickly beaten by Ichibe. He is an incredibly proficient healer who taught Retsu Unohana his technique.

In other words, he is the teacher of Unohana, who is recognized as one of the greatest healers in soul society. His Zanpakuto name is Kinipaka, and his Shikai form activates when he says, “Flash from Illuminating Heaven.” His Bankai has not been revealed.

As discussed in the above section, Ichibe Hyōsube is a powerful and the strongest soul reaper in history, as it has been said that he was the one who gave the name to Zanpakuto, including its Shikai and Bankai form.

He is the guy who always takes charge and always remains serious when given a mission. Ichibe speaks strongly and candidly and usually has an optimistic expression.

But during the battle, he is an entirely different person. Just like his fellow division members, he is very ruthless. Even The Almighty Yhwach had noticed that he smiled even more when he fixated on killing someone.

He is condescending to his adversaries, which can be seen in the case during his battle with Yhwach.

That’s all for today’s post on “Bleach: Squad 0 (Zero) Royal Guards”. We will soon be back with another article on Bleach. Till then, stay tuned and stay updated. See you again.