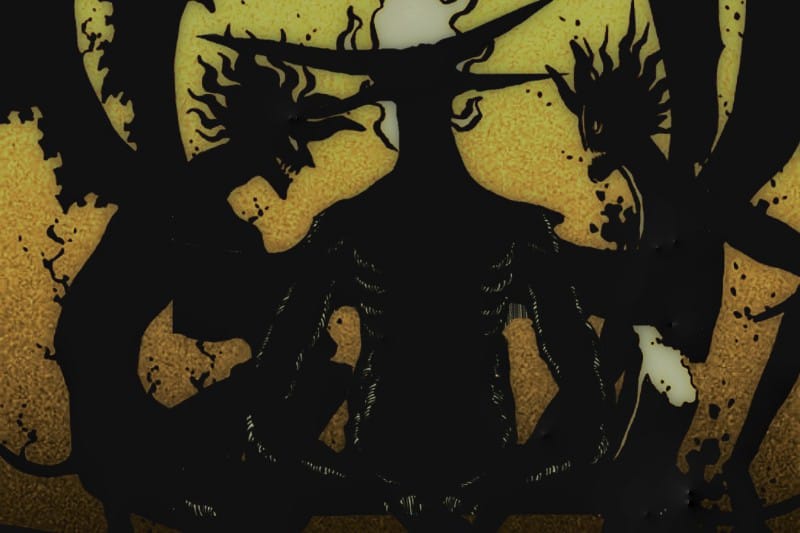 Over time, more and more people are getting inclined toward the world of anime. Yuki Tabata’s Black Clover has caught up in the recent markets with its highly engaging storyline and fantastic characterization. This popular Japanese series revolves around the Magic Knights of the Clover Kingdom, the protagonists being two peasant brothers who strive to find their place among them.

Throughout the series, we see the devils from the Underworld acting as the antagonist faction, constantly plotting to capture the human realm. There exists a strong hierarchy among the devils, which often raises the question of who are the strongest devils. Therefore in this article, we bring to you the Top 13 Strongest Devils in Black Clover. 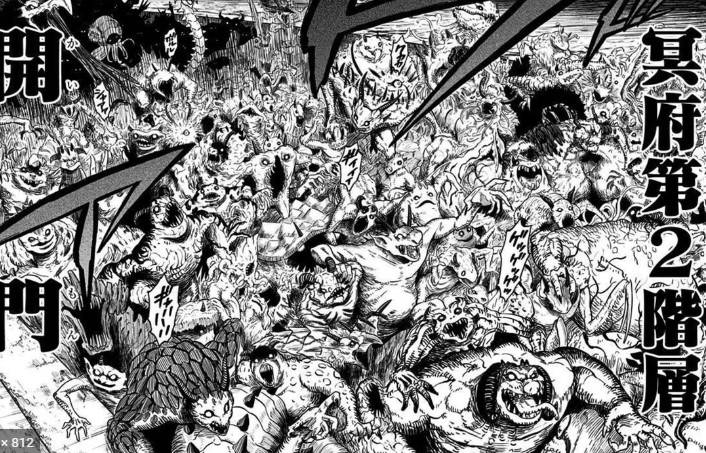 These devils are discriminated against by the upper devils. During the Spade Kingdom battle, the army of low-ranking devils attacked the army. However, they all got eliminated by Fueogoleon and Luck. They are not very powerful, that’s why we have mentioned them in the last. 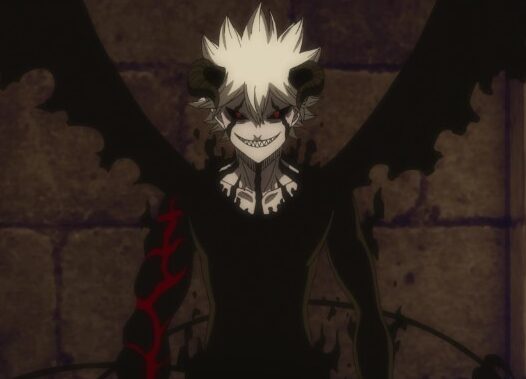 In the eleventh position on our list of strongest devils in Black Clover, we have Leibe, Asta’s devil. Leibe’s journey, as depicted in the series, is quite an emotional one.

A perfect example of a victim of devil hierarchy, Leibe was a constant subject of mockery among his peers and other devils. His hatred towards other devils makes him develop his own Anti-Magic and become a resident of the infamous Five-Leaf Grimoire.

Though Leibe might not be strong individually, pairing up with Asta, he makes an invincible duo that can take down devils like Lucifero. 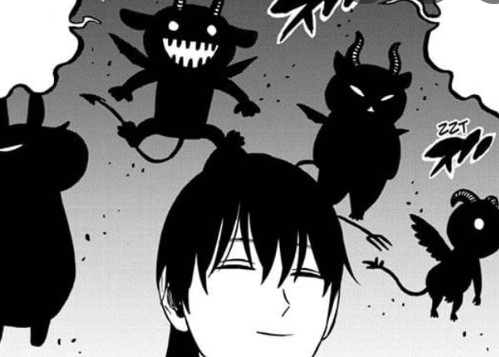 Next up on this list, we have the devils of the vice-captain of the Black Bulls, Nacht Faust. The four devils that Nacht houses aren’t individually strong enough, as they all are mid-ranking devils.

However, they work in unison and, coupled with Nacht’s shadow magic and shadow manipulation, make them a formidable opponent.

Gimodelo, Slotos, Plumede, and Walgner are the four devils that Nacht has befriended with his devil-binding ritual. His powers of stealth and shadow control are one of the strongest weapons of the Black Bulls. 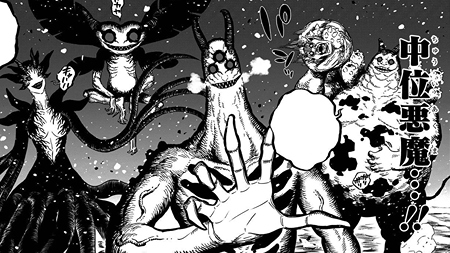 Now, here comes the mid-ranking devils that appeared after the opening of the first gate of the Underworld. These devils are considered to be very strong as compared to lower ones.

They are full of mana, and for a normal mage, it is nearly impossible to defeat them. However, Luck, after training under Dryad, defeated all mid-ranking devils in no time. 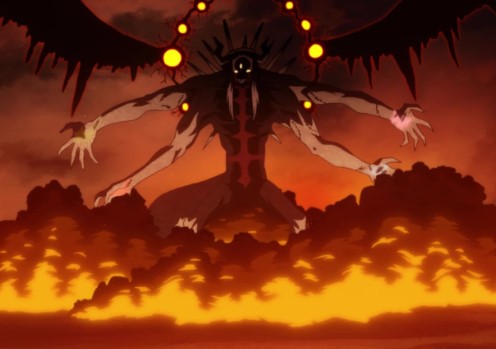 Demons are giants and one of the strongest creatures of the Underworld. They are born from people’s hatred and the Underworld’s power. It is a high level of forbidden magic to transform one into a demon.

They have tremendous mana and the capability to destroy the whole kingdom. The power level of these demons is dependent on the person’s magic level.

Presently we have witnessed three major giant Demons in the series, and among them, Licht’s demon was the strongest. 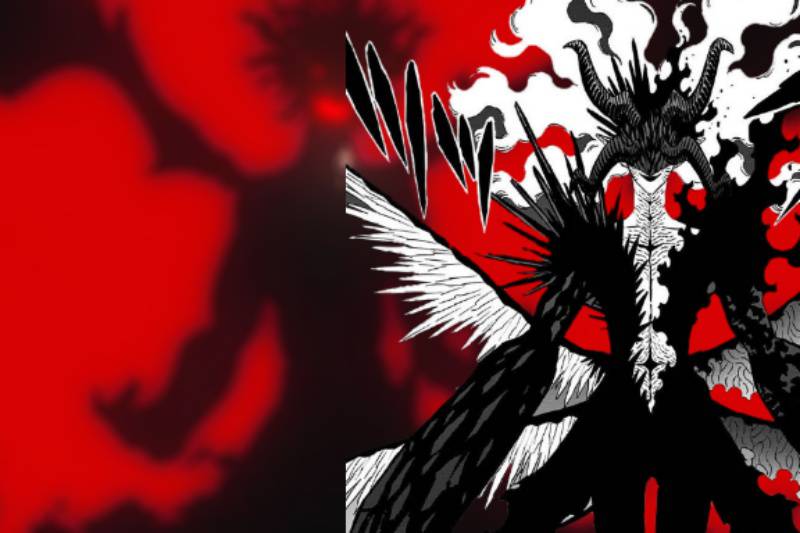 Coming to the next, we have Lilith & Nahamah, who reside in the Underworld on the first level alongside each other. They both resemble each other in appearance.

The black mask which they use helps us to differentiate between the two. Lilith fuses the two bodies of Nahamah, which helps in increasing their power. 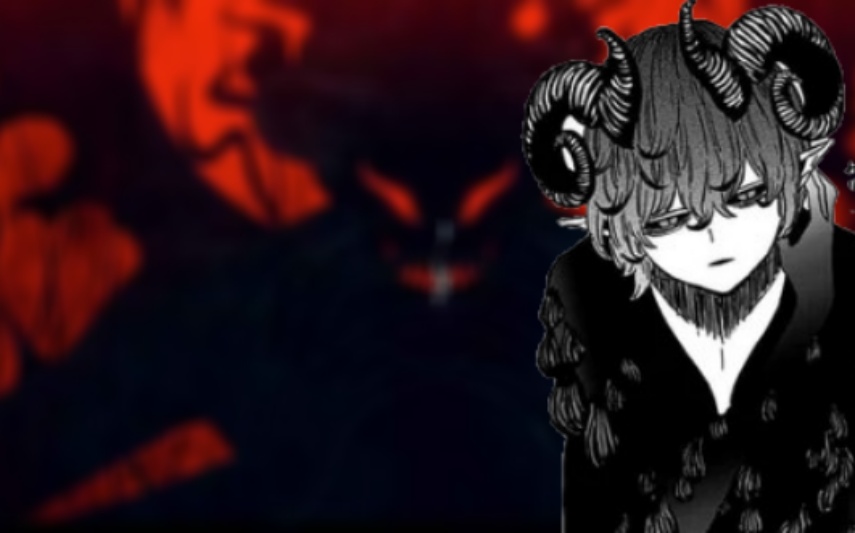 Next on our list, we have Adrammelech, occupying the second level in the Underworld. Lucifero’s Gravity Magic, in certain cases, seems to have no effect on Adrammelech.

The devil’s behavior in the manga chapters seems to be quite uncertain as she defies Lucifero’s order and even takes away his heart after Asta and Liebe defeat him. 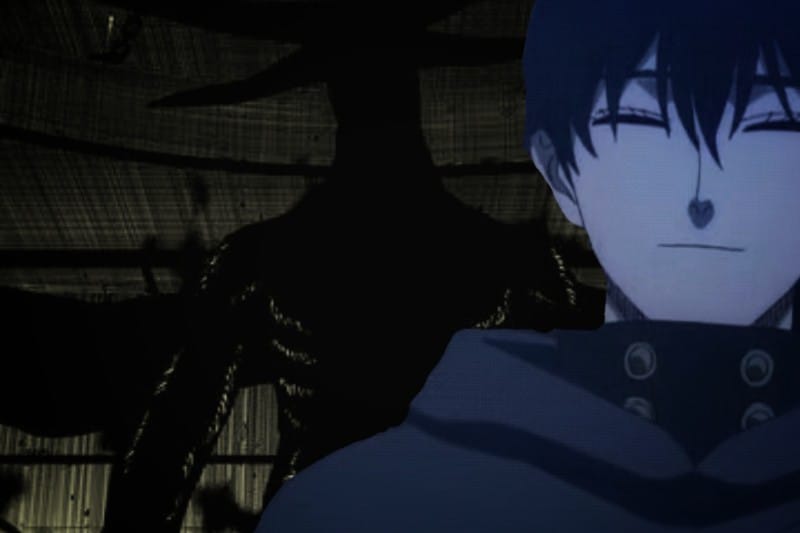 With the recent revelation as a supreme devil, Lucifugus, to date, remains a mysterious figure in Black Clover. His history with Nacht’s family tells us that he possesses immense magical powers and is connected to the tree of Qliphoth.

Despite the Devil-Binding Ritual, he was able to manifest himself and wipe out the Faust household. Lucifugus can be described as a tall and slim figure whose horns resemble an ox’s and has a long-grasping tail. 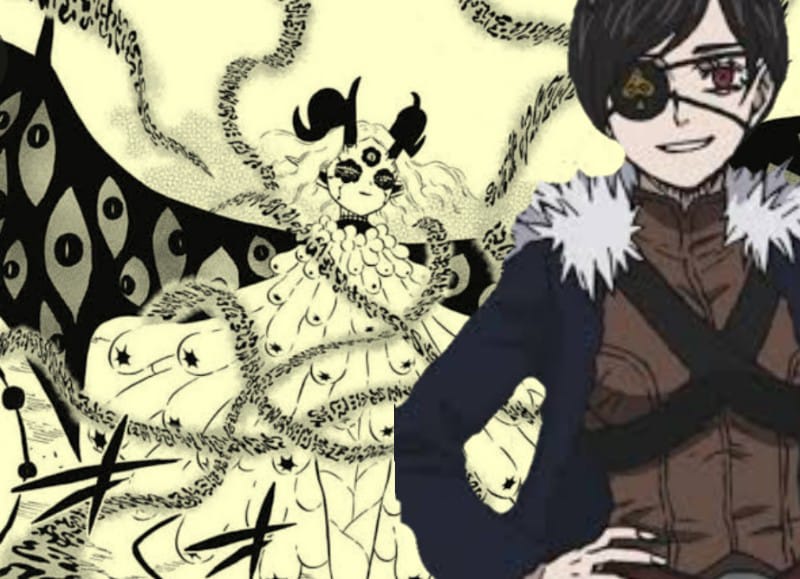 Next up on our list of the strongest devil in Black Clover, we have the three highest-ranking devils, with Megicula occupying the third position. As one of the three rulers of the Underworld, she possesses immense magical powers.

She is known for her extremely powerful curse magic, the derivate of which is used by human mages like Gordon. Megicula is known widely in the human realm because of the deadly curses she placed on Lolopechka and Noelle’s mother, Acier Silva. 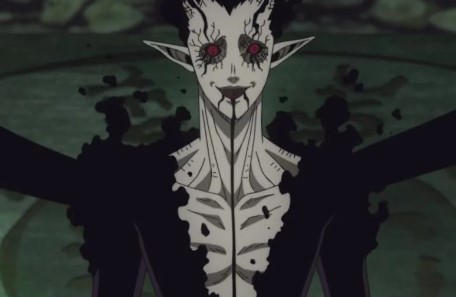 Zagred is undoubtedly one of the most infamous devils in the Black Clover series. As the commander-in-chief of the devils, he possesses immense magical powers.

He is the master planner behind many notorious tasks, including the mass slaughter of the elves and their later reincarnation, which puts the entire Clover kingdom in huge danger.

He possesses multiple magical powers like magic absorption, magic imitation, and reincarnation magic. It took the combined efforts of Asta, Yuno, Captain Yami, and other Magic Knights to defeat him. He is a self-centered person who doesn’t care about the technique he uses to attain his goal. 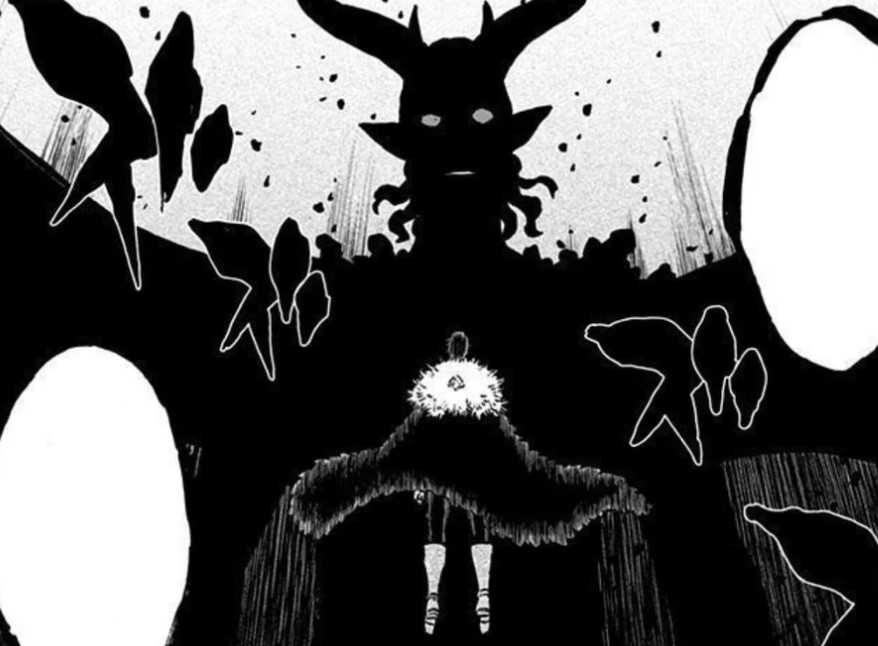 Hosted by Zenon Zogritis, Beelzebub is one of the three rulers of the Underworld, along with Megicula and Lucifero. His huge reserve of magical powers makes him one of the highest-ranking devils.

He wields spatial magic that allows him to manipulate space freely. His debut in the manga chapter 238 reveals him as a large figure in deep black characterized by two wings and four horns. 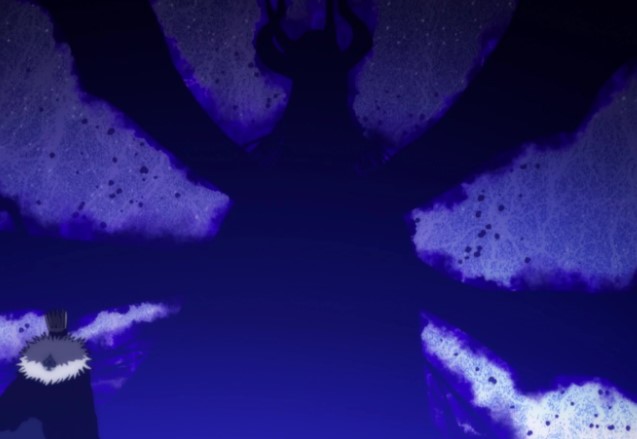 The first position in our list of Strongest Devils in Black Clover is occupied by Lucifero. Wielding Gravity magic, he is undoubtedly the strongest devil of the Underworld and also one of its three rulers.

His power to manipulate gravity places him above all other magic, as gravity can freely influence attributes like time, space, water, fire, etc. He houses immense magical powers and can exercise his control over the bodies of mid and low-ranking devils.

Must Read: Lucius vs. Lucifero: Is Lucius stronger than Lucifero (complete form)? 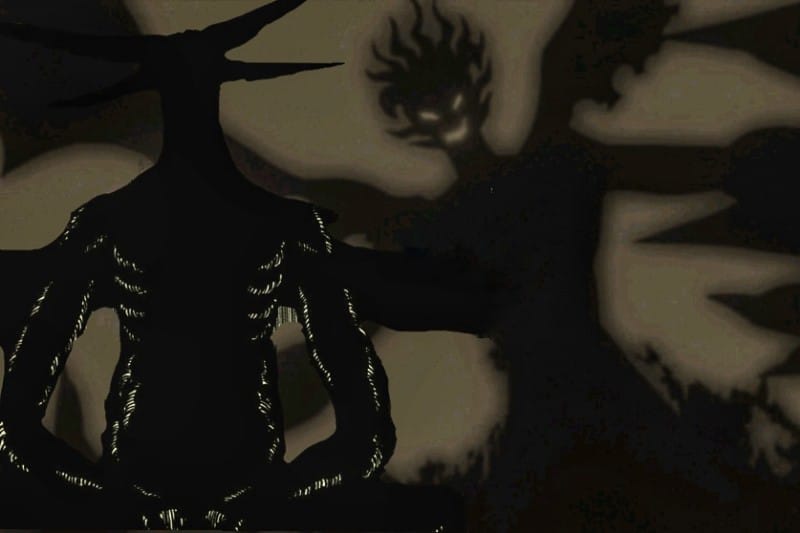 One of the most mysterious figures and the strongest devil in Black Clover is Astaroth. He was the previous ruler of the Underworld alongside Lucifero and Beelzebub. After his sudden disappearance, his position was taken over by Megicula.

He is a wielder of powerful time magic. The 331st chapter of the manga takes the fans by surprise by deriving some straightforward connections between the Wizard King, Julius (Time Magic wielder), and Astaroth.

Adrammelech takes away Lucifero’s heart only to give it to Astaroth. With Lucifero’s gravity magic and his own time magic, Astaroth is undoubtedly the strongest devil in the Underworld.

Apart from these ten positions, there are a few that deserve special mention. These devils are ancient devils, namely Licht’s Devil, whom the first wizard king defeated, and a few other big devils that were summoned by the Dark Triad during the Spade Kingdom raid arc.

Here, we conclude our article Top 10 Strongest Devils in Black Clover. If you haven’t watched the series yet, you can easily avail it on Netflix and Funimation. If in case the anime is not available in your country, you can use a VPN and set the location to the country it is available. Readers can find the manga version on Viz media. We will be back with another article, so stay tuned until then.