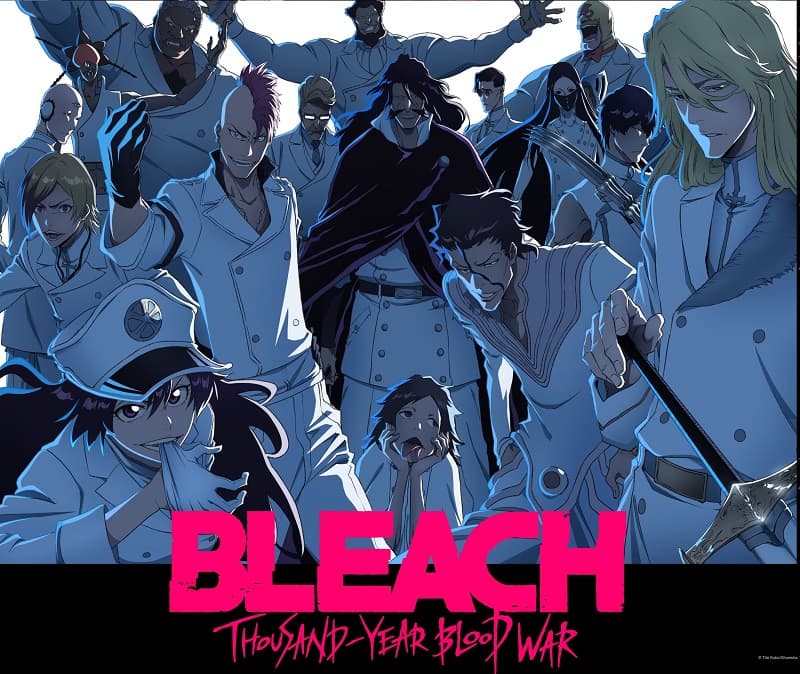 Bleach is currently one of the most popular and trending manga worldwide. Yesterday, its trailer was released, raising more hype about the anime that will air next month. The Thousand Year Blood War arc is the manga’s final arc, which deals with the clash between Soul Reapers and Quincies. Today in this article, we are going to discuss the “Top 20 strongest Quincy in Bleach”.

Quincy is the antithesis of Soul Reaper, and unlike them, they eradicate the hollows completely. They were annihilated by the Soul reapers to maintain the balance between all three worlds.

Just like soul reapers, they can detect spiritual pressure. Sternritters are nothing but a particular group of Quincies who are a part of the Wanderich Army, which Yhwach leads. Their main goal is the eradication of Soul Reapers.

Sternritters were the final antagonist of the series as they completely swept out the soul reapers during their first invasion. They defeated soul reapers by stealing their Bankai.

Thanks to Kisuke Urahara, former captain of Squad 12, the tides have successfully turned out. He deduced that, unlike soul reapers who become Visoreds when contracted with the hollow powers, they are incompatible with Hollow’s power. So, let’s begin. 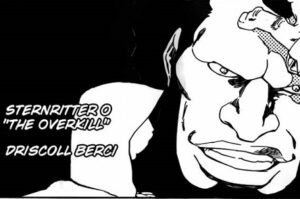 Driscoll Berci was introduced early at the start of the arc as he was present during the declaration of war on soul society. He fought against the vice-captain of the 1st division Chojiro Sasakibe. He was the first Sternritter to steal the Bankai of a soul reaper and annihilate Chojiro.

Driscoll became very overconfident when he clashed against the Genryusai Yamamoto, he was burnt to a crisp when the Captain Commander unleashed his Bankai. He was given the letter O, which signifies The Overkill. 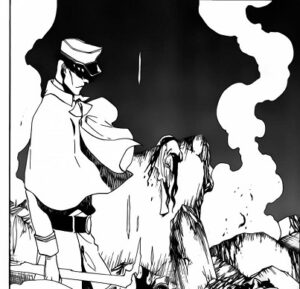 Quilge fought against Ichigo Kurosaki in Hueco Mondo. He tried to steal his Bankai he failed and could not comprehend why he was dying. The only thing which Quilge succeeded in was stalling Ichigo in Hueco Mondo; he tried his best to stop him from entering Soul Society.

He was cut into half vertically by an unknown slasher, probably Grimmjow. Quilge was given the letter J, which signifies The Jail. 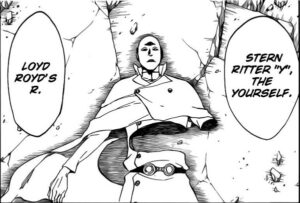 Royd fought against Yamamoto while impersonating Yhwach. He was strong enough to defeat Kenpachi Zaraki with one blow effortlessly. Royd even managed to give a tough fight to Yamamoto.

He was exterminated by Yamamoto’s Bankai, but his death was instrumental in Commander’s defeat. As he managed to trick Yamamoto and gave his leader Ywach a chance to steal his Bankai. He has a twin brother named Loyd Lloyd and was given the letter Y, which signifies “The Yourself.” 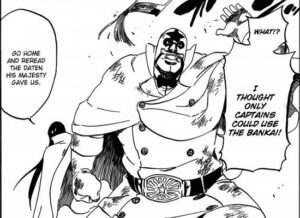 Mask De Masculine is the Sternritter who greatly depends on his strength. He is a self-proclaimed hero who does not use his mind. Mask managed to blow Renji with one punch during the first invasion.

During the second invasion, he managed to defeat two captains all by himself. Before fighting against the captains, he manages to defeat Ikkaku, Yumichika, and Hisagi.

He met his end when he clashed once again with Renji, who split him by using the full strength of his Bankai. He was given the letter S, which signifies The Superstar. 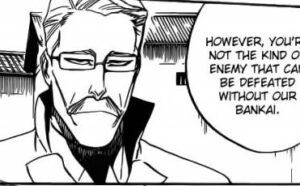 Robert, during the first invasion, manages to take one eye off Shunsui Kyouraku. He tries to stop Ichigo during the second invasion, which is in vain. Robert is exterminated when Yhwach uses Auswahlen, which destroys him, ripping his flesh apart. He was given the letter N.

Giselle played an essential role during the second half of the arc. She managed to make zombies out of Toshiro Hitsugaya, Rangiku, Bambieta, etc. Mayuri Kurostuchi defeated Giselle after witnessing Yhwach using Aushwalen, which led many of her comrades to perish in front of her.

She teams up with Liltoto and Bazz B to stop Yhwach, but he easily incapacitates her. She was given the letter Z, which signifies The Zombie. 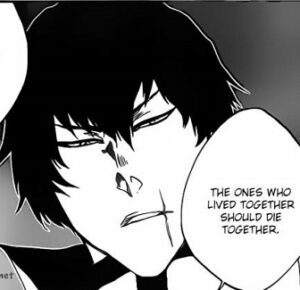 Cang Du, along with other Sternritters, invaded the Soul Society. During the invasion, he encountered Toshiro Hitsugaya, whom he fought. Cang Du manages to steal Toshiro’s Bankai and use it against him.

Later during the second invasion, he makes his return when Toshiro is defeated at the hands of Bazz B. Cang Du came to finish Toshiro for good but thanks to Urahara’s intervention Toshiro gets his Bankai back. He was given the letter I, which signifies The Iron. 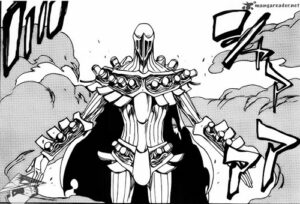 BG 9 invaded soul society along with other Sternritters to eradicate the soul reapers. During the invasion, he encountered Sui-Feng, the captain of Squad 2, whom he fought. He manages to steal her Bankai.

BG 9 was shocked when Uryu was announced as the successor of Ywach instead of Jugaram. Later he battled against Marcheiyo Omaeda and Sui-Feng, overwhelming them both using Sui-Feng’s Bankai.

BG 9 grabs Sui-Feng and starts to steal her data. But soon after, Sui-Feng gets her Bankai back, and she defeats him for good. Later he was rescued by other Sternritters alongside Cang Du.

BG9 was tied up in front of his majesty, where he witnessed Cang Du being cut down by Jugaram while he was awaiting his fate. He was given the letter K. 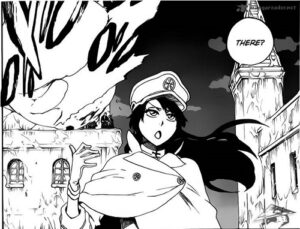 Bambieta invaded soul society and encountered Sajin Komamura. She mocked Komamura for his looks and humiliated him after stealing her Bankai.

Bambieta was very arrogant as she criticized her fellow Sternritters. She confronted Shinji and Komamura during the second invasion, where she defeated the former with ease.

Bambieta once again starts to mock Komamura, who is wearing a helmet, and during her attack, she manages to destroy his helmet. She was shocked when she saw the human form of Komamura.

Bambieta is still overconfident regarding the battle’s outcome, and she foresaw her defeat when she saw a hole through Komamura’s chest. Komamura gave up his heart to defeat Bambieta for good, destroying her with his full power.

Bambieta was later zombified by her fellow Sternritter, whom she mocked. She was given the letter E, which signifies The Explode. 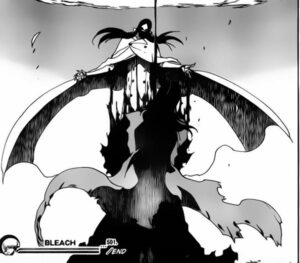 As Nodt was given the letter F which signifies The Fear. He invaded soul society during the first invasion and fought against Byakuya. As Nodt stole Byakuya’s Bankai and nearly killed him.

He preys on the fear of the opponents. He fought against Rukia Kuchiki during the second invasion, where he was killed when she unleashed her Bankai. 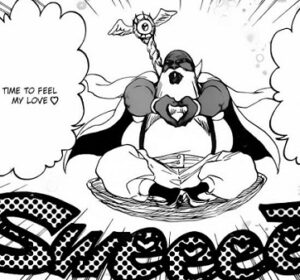 Pepe did not play an active role during the first invasion, but during the second half, he battled against Byakuya Kuchiki by controlling Shuhei Hisagi. Later on, he started to control zombified version of Kensei and Rose to attack Byakuya and Shuhei.

Unfortunately, Mayuri Kurotsiuchi arrived and quickly took control of the battle. The zombies, which Pepe took control of, started to attack him. He was given the letter L, which signifies The Love. 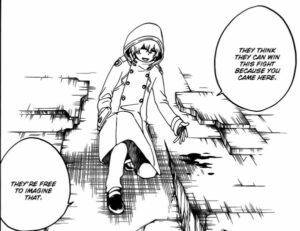 Gremmy is one of the powerful Sternritter in the Bleach series. He can turn visions into reality. Gremmy made his first appearance during the Second invasion and fought against Yachiru, where he defeated her with ease. Suddenly with the arrival of Kenpachi Zaraki, the captain of squad 11 who specializes in brute strength.

He fought toe-to-toe against him. Gremmy increased his power to match the strength of Zaraki. He sent a colossal meteorite towards Zaraki, which he destroyed by using his Shikai for the first time in the series. This gave a massive shock to Gremmy. Ironically, he imagined Zaraki to be the monster that led to his defeat.

He was obliterated by Zaraki after a tough fight. Zaraki became tired after the end of the fight, which showed how powerful Gremmy was. He was given the letter V which signifies The Visionary. 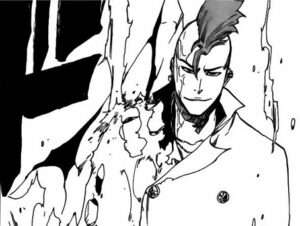 Bazz B is one of the strongest Sternritter who was a childhood friend of Jugaram Haschwalth. When Uryu was declared successor, he was distraught for his friend. Bazz B was going to question Ywach about the successor-related thing, but his friend stopped him.

During the second invasion, he fought against Toshiro Hitsugaya and defeated him after a tough battle. Bazz B was about to kill Toshiro but was stopped by Cang Du, who wanted to destroy him. He witnessed the defeat of Cang Du while mocking him from afar. Bazz B funnily argues with Renji when he later insults his Mohawk.

He changed his allegiance after witnessing his comrades die when Yhwach cast Aushwahlen. Bazz B fought against his friend and was destroyed by his hands. He was given the letter H, which signifies The Heat. 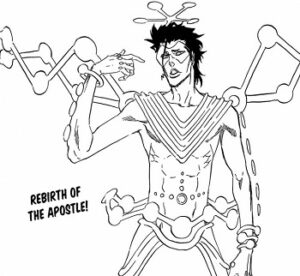 He later faced Yoruichi Shihoin, which pushed him to use his Volstanding. Later, he battles Kisuke Urahara, one of the five war potentials who uses his Bankai to defeat him.

Askin was struggling against Urahara, and suddenly Grimmjow came from behind and impaled him, which sealed his defeat. He was given the letter D, which signifies The Death Dealing. 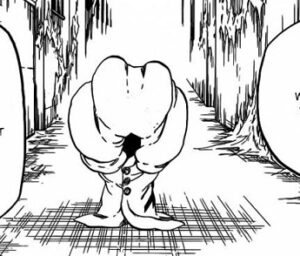 Perinda was given the letter C, which signifies The Compulsory. She was the left hand of Soul King. Perinda is a member of the elite squad of Yhwach and was on the Sternritter to invade Soul King’s palace.

Perinda, later on, fought against Mayuri Kurotsuchi and Nemu. To defeat her, it took Nemu to sacrifice. Thus, it leads the squad 12 captain to gain the upper hand and beat her. After the battle, Mayuri was forced to retire from Battlefield. 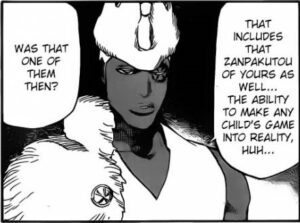 Lille Barro was one of the elite squad of Yhwach who invaded Soul King’s palace. He was quickly defeated by Oetsu Nimaya during the invasion. Later on, he battles against the new captain commander Shunsui Kyoraku.

Lille Barro proved to be a formidable opponent for Kyoraku, which forced him to use his Bankai. Shunsui’s Bankai fails to destroy him; he is later defeated by Nano Ise when Kyokatsu suddenly appears behind her. He was later eradicated by Izuru Kira. He was given the letter X, which signifies The X-Axis. 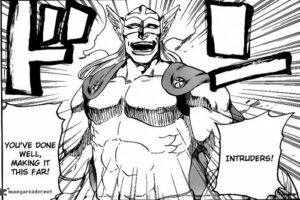 Gerald Valkyrie is one of the powerful Sternritter, fighting against three captains at once. He was able to sustain the damages of all three captains who were using the full power of Bankai.

Gerald was one of the elite members of Yhwach’s squad. He was killed when Yhwach used his Aushwahlen. He was given the letter M which signifies The Miracle.

Jugaram is the highest rank Quincy in Yhwach’s army and is one of the most powerful Sternritter in the series. He was extremely loyal to Yhwach and was never upset when Uryu was announced as Yhwach’s successor. Jugaram destroyed anyone who opposed Yhwach, like his friend Bazz B.

During the final phase of the battle, he confronted Uryu and nearly managed to defeat him. Unfortunately, he is killed like Gerald when Yhwach uses Aushwahlen. He was given the letter B, which signifies The Balance. 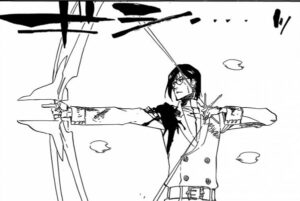 Uryu was announced as a successor of Yhwach by The Almighty himself. He was granted the same letter that Yhwach used. When he questions why he was chosen over Jugaram, Yhwach replies that he has the power which might surpass him in the future.

He was the only Quincy who survived Aushwahlen, which Yhwach cast years ago, resulting in the death of Ichigo and Uryu’s mother. He was regarded as the last survivor by Yhwach.

Uryu fought against Jugaram, and after his death, he played a crucial role in defeating Ywach along with Ichigo, Renji, and Aizen. He was given the letter A which signifies The Antithesis. He is currently the most powerful Sternritter alive. 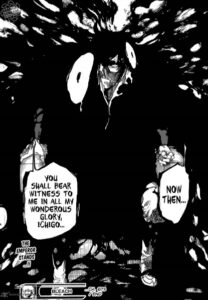 Yhwach is the final antagonist of the Bleach series. He invaded soul society to recruit Aizen and to steal Yamamoto’s Bankai. He is the most powerful Sternritter in the series. Yhwach single-handedly destroys squad 0 during his invasion of Soul King’s palace. He successfully absorbs the Soul King and defeats Ichigo with ease.

He was defeated by the collective efforts of Ichigo, Renji, Aizen, and Uryu. He was given the letter A which signifies The All mighty.

So, this is it for today, folks! Here, we have concluded our article on “Top 20 Strongest Quincy in Bleach”. We will be back with another Bleach article very soon.