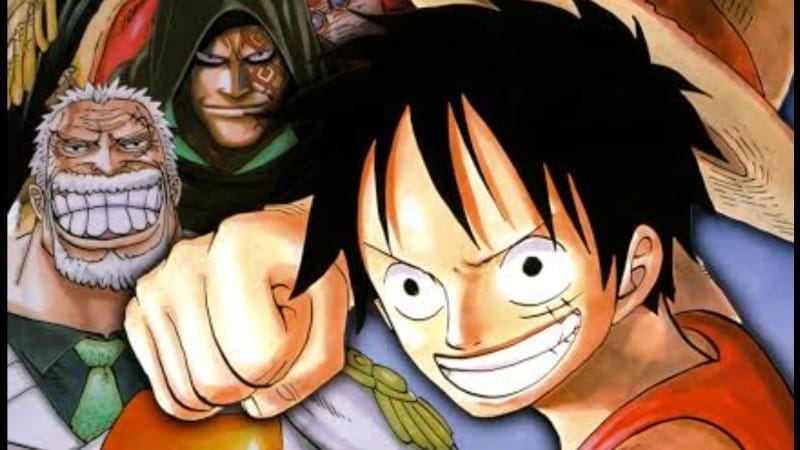 The long-running masterpiece by Eiichiro Oda, One Piece, has several overpowered characters, but the story center focused on the people who carry ‘D’ in their names. In the past years, we have learned a lot about D., the “Will of D,” and many more.

However, it’s still not enough. Because every time, Oda sensei only give us a piece of the enormous puzzle to fix it. And in the end, when all the pieces are at their right places, then we will know the real meaning of the “Will of D.“

This makes One Piece superior to any other series. Back to the storyline, the name “D” was first introduced by Kureha in the Drum Island arc.

She revealed the true name of the Pirate King, Gol D. Roger, and after that, she talked a glimpse about the “Will of D.” Well, of course, this wasn’t the unexpected part because, in her golden days, she was the doctor of the Legendary Rocks Pirates.

Here in this article, we will rank the Top 10 Strongest Members of the D Family, meaning the characters who have the word ‘D.’ in the middle of their names.

It has been said that people who inherited ‘D’ in the middle of their names are sworn enemies of God. They are usually people who are captains or leaders as they are destined to be kings by birth. So, this was the short intro on the inherited Will now; let’s proceed on the Top 10s.

Must Read: Top 66 Highest Bounty in One Piece (List Highest to Lowest Bounty) 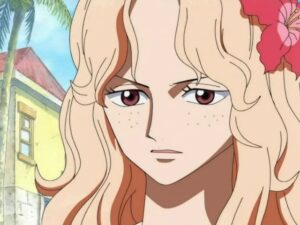 She was the mother of Portgas D. Ace and wife of Pirate King Gol D. Roger. She was pregnant with Ace in Baterrila, South Blue, where she hid from the World Government and held her pregnancy for 20 months.

Because of her great Will Power, to hid her baby for 20 months in her stomach; she made her name in the Top 10 Strongest Members. Some believe that she was the previous user of Gomu Gomu no Mi (Rubber Fruit). However, it is not officially confirmed anywhere. 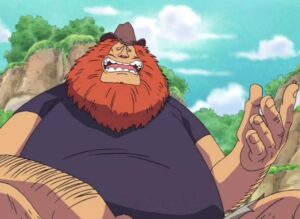 The Giant and the former Vice-Admiral, Jaguar D. Saul, was first appeared in the Enies Lobby arc in Nico Robin’s flashback.

He was a powerful giant who risked his life to save Nico Robin. His friend, Kuzan, froze him for saving the life of Ohara’s child.

He is a giant with immense strength; that’s why he ended up in the 9th position. 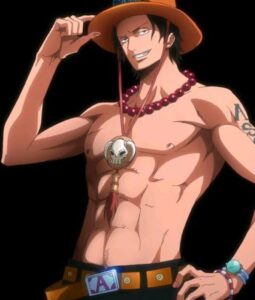 Portgas D. Ace was the son of the Pirate King, Gol D. Roger, and the owner of overpowered Flame-Flame Logia Devil Fruit (Mera Mera no Mi).

He had all three Haki and was powerful enough to be appointed as the 2nd division commander of the White Beard Pirates. Not only White Beard, but his ability was also even acknowledged by the Emperor’s Shanks and Blackbeard.

With skills and the advantage of his devil fruit, he even overpowered an Admiral, Aokiji. He was one of the strongest and most handsome characters in One Piece. 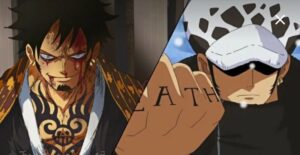 The captain of the Heart Pirates, and one of the strongest Supernova, is no one other than Trafalgar D. Law, the Surgeon of Death.

He ate Ope Ope no Mi, which is said to be one of the most advantageous devil fruits in One Piece World. He is powerful enough to be appointed as the Shichibukai by the World Government.

His Paramecia type devil fruit allows him to create a sphere of void in which he can manipulate space with the help of his Haki. He can manipulate either living or non-living beings in his sphere.

Because of this ability, he is known as the Surgeon of Death. Even Donquixote Doflamingo appraised his devil fruit. Presently, Law has awakened his fruit and his fruit allows him to land internal damages to his opponent. 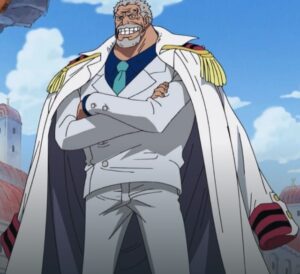 Monkey D. Garp is the Vice-Admiral and the Hero of Marines, who captured the Pirate King, Gol D. Roger. He earned his title from the God Valley Incident, where he and Roger alone took down the Rocks Pirate, which is believed to be the most substantial pirate crew in the One Piece History.

Every legendary character of the Pirate King Era acknowledges his power. He is a non-devil fruit user who has the most vigorous Armament Haki. He is Monkey D. Luffy’s grandfather and the father of Monkey D. Dragon (the Revolutionary).

His most notable feat was crushing a mountain with his bare fist. That’s why he was renounced as the nickname Garp, the fist. Presently due to his old age, he is ranked at 6th position. 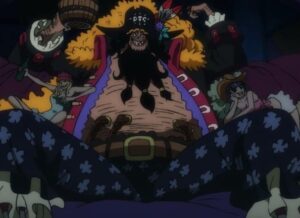 Marshall D. Teach, aka Blackbeard, is the antagonist of the series and the Emperor of the One Piece World. The dangerous power he has is knowledge. He is the only person in history to wield the power of the 2 most vital devil fruit.

First, he murdered his own subordinate for the Yami Yami no Mi (Dark Dark Fruit), the strongest logia devil fruit. Then he intentionally eliminated White Beard and obtained his fruit, Gura Gura no Mi (Tremor Tremor Fruit), considered to be the strongest in Paramecia devil fruit.

Currently, Blackbeard has attained the position of an Emperor with a bounty of 2.2 Billion Berries. That’s why he is ranked at 5th position. 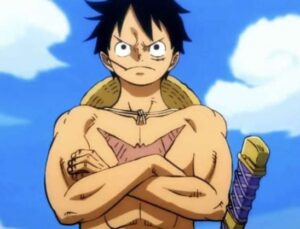 The protagonist of the series, Monkey D. Luffy, is the One Piece series’s most popular and strongest member of D family in One Piece. He gained all three Haki from bloodline, and from training, he knows to use them properly.

He ate Rubber Rubber Paramecia type devil fruit or we can say now, “Hito Hito no Mi: Mythical Zoan Model Nika” which grants him too much resilience. Using his fruits’ ability at best, along with Haki, makes him one of the most dangerous characters in One Piece World.

He has utilized his devil fruit brilliantly on several occasions to increase his strength and resilience to an immense level that let him subdue the most formidable opponents including, Doflamingo, Arlong, and Katakuri.

Presently, he even challenged Emperor Kaido from one on one straight battle. His bounty after defeating Katakuri exponentially jumped to 1.5 billion Berries which is the highest among the Supernova. After awakening, Luffy is now as powerful as Kaido. To know more about Luffy’s awakening power, visit the article mentioned below. 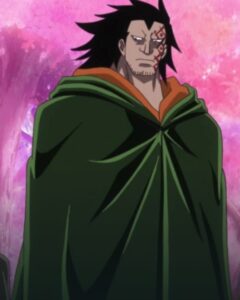 Monkey D. Dragon is the one of the strongest members of D family in One Piece. He is titled as the “World’s Worst Criminal.” and the leader of the Revolutionary army, who sworn to topple the World Government upside down. He is Luffy’s father who made his first debut in the Loguetown Arc.

His identity is still left to unveil. He is a mysterious character who can manifest storms according to his need. Many fans predict that he inherited mythical Zoan devil fruit, which allows him to manipulate winds and weather.

It is unpredictable to rank him because no one knows his true strength, power, and ability. Hence, we ranked him at 3rd position. 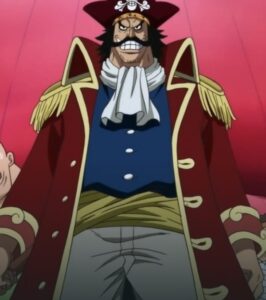 The Pirate King, Gol D. Roger is the one of the strongest members of D family in One Piece. He was the captain of the Roger Pirates. He was the first pirate to travel all across the unimaginable world and finally found the last island, Raftel.

The Roger Pirates was the only one who has the knowledge of the three biggest mysteries of the One Piece, Void Century, the Will of D, and the Ancient Kingdom. After discovering the last island, he was entitled as the King of Pirates.

He was categorized as the most robust character in the One Piece series with the bounty of 5,564,800,000 berries that even the World Government feared. Must Read: One Piece: All Devil Fruit Designs (Officially with Pictures) 2022 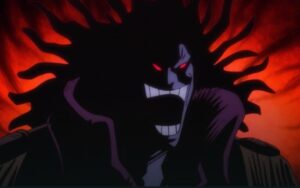 Rocks D. Xebec, the Captain of the Rocks Pirates, is the most powerful known member of the D clan. In the One Piece series, it is not officially mentioned that Xebec is superior to Roger.

However, he is powerful enough to form and manage a Pirate crew with all time the fierce characters like Whitebeard, Big Mom, Kaido, Shiki, Captain John, etc. They all are great names on their own.

Therefore, he attained the topmost position on this list. Despite having the strongest peoples on his side, he was brutally crushed by Gol D Roger and Monkey D. Garp in the God Valley Incident.

Here’s our list of the Top 10 Strongest Members of the D family in One Piece. The “D” Family in the One Piece Saga is definitely extremely strong. Still, several other characters are compelling and strong-willed to be considered the same stature as the “D” bearers.

We will be back with another One Piece ranking article. Till then, stay tuned stay healthy.

Where can I watch Dubbed One Piece