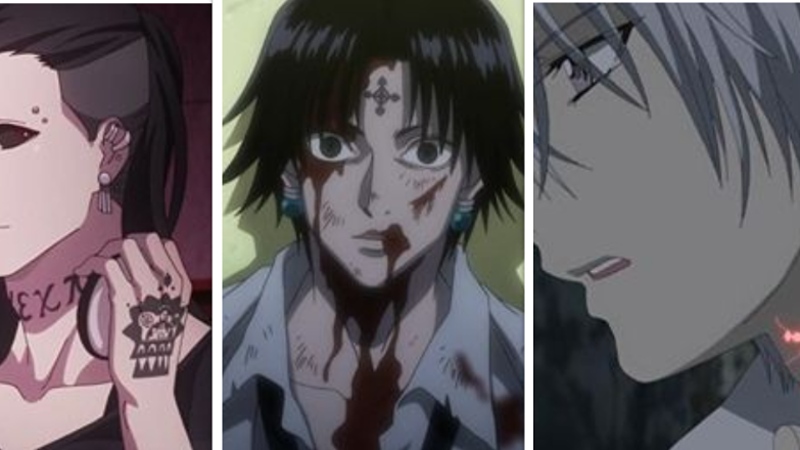 Tattoos are nowadays becoming increasingly popular. As a style factor, it adds to the coolness of one’s personality. A tattoo is a piece of art that defines a lot about one’s character. It can signify valor, strength, an idea, or any person’s feeling. The tattoo also helps us with the identification of a person.

On the other hand, with each passing moment, the fan base of anime has been increasing by several folds over the years. Many characters in anime have been shown with mesmerizing tattoos in various styles.

Anime lovers can even get themselves inked with exactly the same tattoo that their favorite character has. In this article, we have mentioned a list of 20 Anime Characters with tattoos on their body. To know more about the incredible tattoos which the famous characters have, continue reading the article. 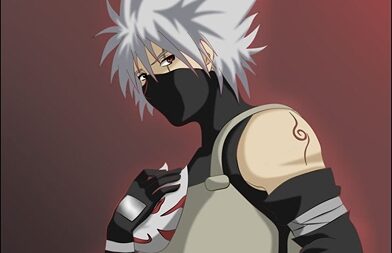 In the 20th position of Anime Characters with tattoos, we have Kakashi Hatake, who was an Anbu Black ops captain in his early days. So, he has a fantastic Anbu tattoo inked on his upper left arm, symbolizing his position in the elite organization.

Kakashi’s Anbu tattoo depicts his selfless nature and the sacrifices that one must pass through to become one of the members of the most elite forces of Konoha. 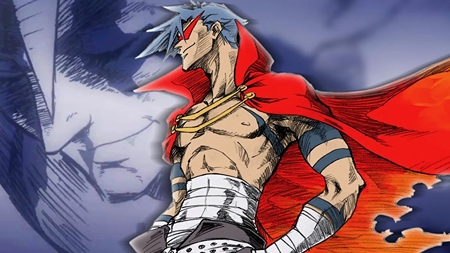 Following up, we have Kamina, a young man who is proud of being a tough person. He has a tattoo on both his arms, which runs along his shoulders and then to his back. It is blue in color. He also has a spectacular fire tattoo inked on his back. This stunning tattoo makes him different from the rest of the characters. 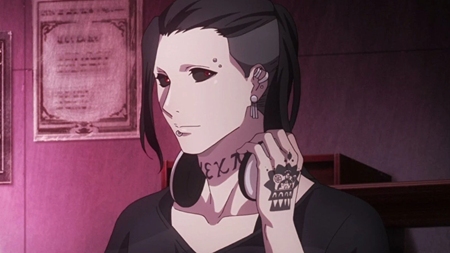 Uta is a tall man with black hair who has multiple tattoos inked all over his body. The tattoos symbolize his cool and funky nature. His tattoos include a Sun tattoo that covers the entire left side of his chest, scleral tattoos, and a tattoo on his neck. The tattoo on his neck is a Latin quote in the Greek language which reads, “I can live neither with you nor without you.“ 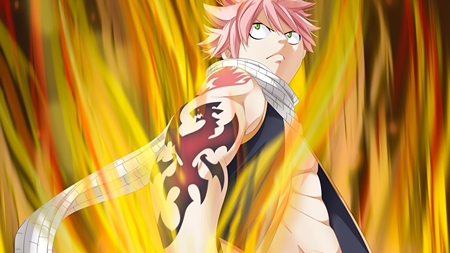 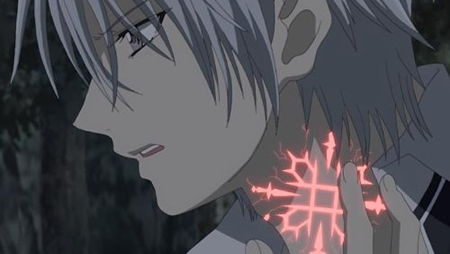 In the 16th position of Anime Characters with tattoos, we have Zero Kiryu, the main protagonist of the famous series Vampire Knight. He is a half-vampire who has an incredible tattoo on his back. His tattoo symbolizes daggers, which distinguishes him from other anime characters. The design of the daggers inked on his body is quite unique.

15) Tatsu (The Way of the HouseHusband) Full Back Tattoo 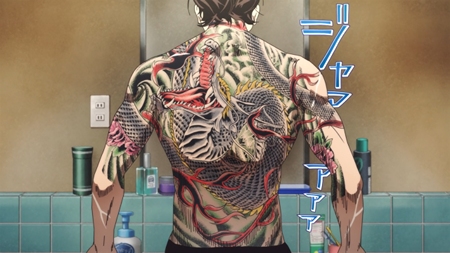 Next, we have Tatsu, also known by the other name, “The Immortal Dragon.” He has now decided to work as a househusband for his wife, away from his earlier life of crime. He has tattoos all the way around his back which runs along his forearm and also touches his pectoral region. Various designs of tattoos cover the upper region of his body. 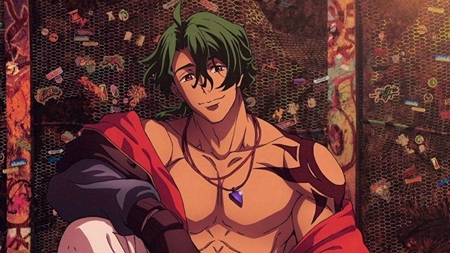 In the 14th position of Anime Characters with tattoos, we have Kojiro Nanji, a tall, muscular man who is a talented skater also. He has a large black sun-shaped abstract tattoo running on his left shoulder. The tattoo inked on his body is quite a unique and interesting one. 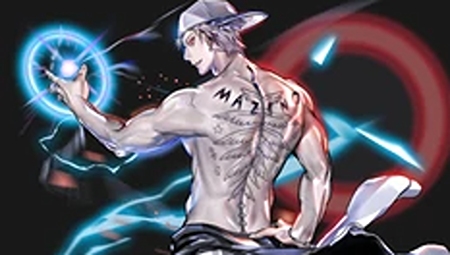 Now, we have Urek Mazino, a handsome man with blonde hair. He has a muscular tattoo inked on his back, representing a Wing Tree symbol. The tattoo also contains his name letters and the Wing Tree symbol. The incredible Wing tree tattoo spreads on his entire back, giving it an attractive look. 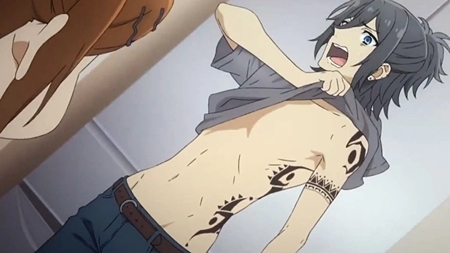 Izumi Miyamura is one of the main characters of the series Horimiya. People know him as a person who is silent and not socially active. He has two tattoos, one on his torso side and the other on his arms. The design represents a tribal kind of band. However, there is no such explanation as to why he has chosen that tattoo. 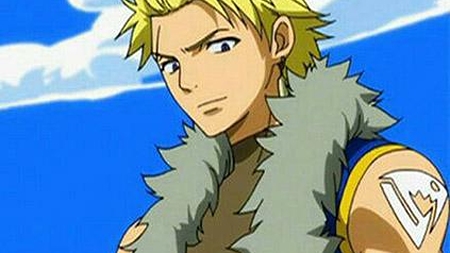 Sting Eucliffe is the current guild master of the Sabertooth guild, and his tattoo represents the guild symbol, i.e., Sabertooth. Like Fairy Tail, the Sabertooth symbol is also one of the most liked tattoos among the fans. This tattoo displays the Sabertooth’s head that defines dominancy and power. 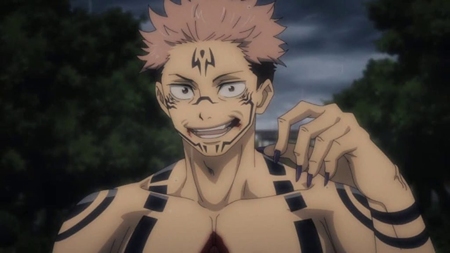 Ryomen Sukuna was earlier described as a demon who has two faces and four arms. Several tattoos are inked on his body which includes two lines on both his wrists and also on the upper region of his wrist.

Both his shoulders have circles made on them with a dot. His stomach has two lines, and also, two lines are made on his chest. When Ryomen Sukuna, the king of Curses, takes over Itadori’s body, the latter becomes completely different. It is characterized by the appearance of several tattoos on Itadori’s body. 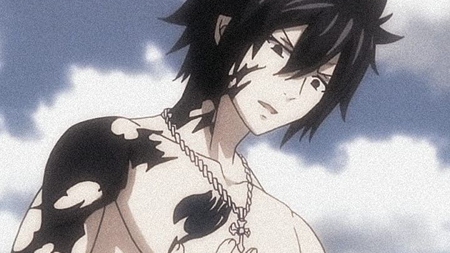 In the 9th position of Anime Characters with tattoos, we have Gray Fullbuster, who is often seen in little clothing because of his magic. Due to this, his extraordinary tattoo can be easily seen.

He has a tattoo on his right arm symbolizing the Ice Devil Slayer Magic Tattoo, which he obtained from his father. Gray Fullbuster is the master of Ice Magic. 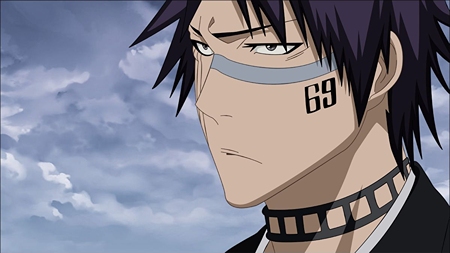 Hisagi Shuhei is a tall and thin man, having scars all over his right eye and down his cheek. He has the number “69” inked on his left cheek. Hisagi had made this tattoo after being inspired by Kensei Muguruma, who had once saved his life from a Hollow when he was quite young. 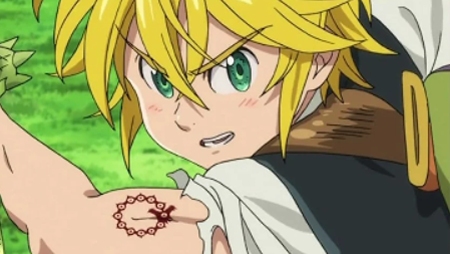 Following up, we have, Meliodas, the leader of the famous series Seven Deadly Sins and the prince of purgatory. The Dragon Sin Ouroboros Tattoo inked at the top of his left bicep easily distinguishes him from the other characters.

The tattoo is a cyclical symbol, which in some beliefs signifies the meaning of infinity. Also, his tattoo defines the sin of wrath. 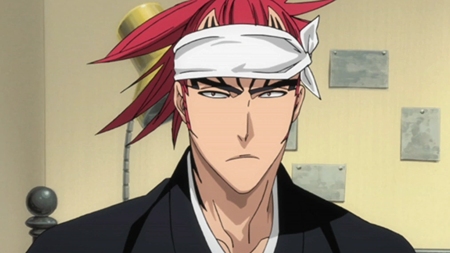 Renji Abarai is a crimson hair person whose hair is tied in a high ponytail. He has quite a lot of tattoos made on his body. Several tribal designs are inked on the upper region of his body.

The tattoos have increased in number with time. With his tattoos, he has covered almost his entire upper region, including his chest, entire back, forehead, and his limbs. 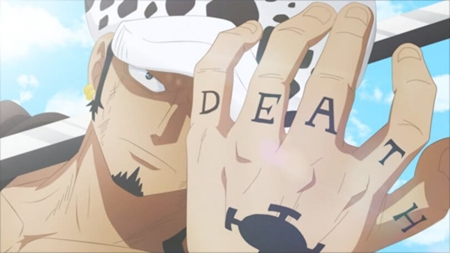 Trafalgar Law is a tall and slim man, always seen with a smirk on his face. Even he has tribal tattoos inked on both his arms. The letters of the word “DEATH” read on each of his finger’s back, colored in black. He also has a black cross inked on the back of both his hands and a heart made in tribal style with his Jolly Roger made in it. 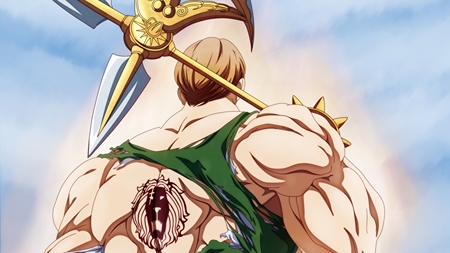 In the 4th position of Anime Characters with tattoos, we have, Escanor, a middle-aged person in the series Seven Deadly Sin, whose personality changes with his strength. He has an incredible Lion tattoo inked on his back.

The Lion tattoo symbolizes pride, a clear reflection of Escanor’s personality, which was as bright as the sun. This tattoo makes him stand out in with the other anime characters. 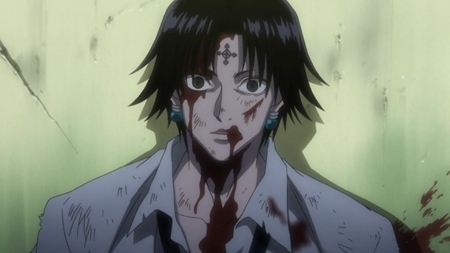 Then coming to the third place, we have Chrollo Lucilfer, a young man with grey-colored eyes and jet black hair. The two distinguishable marks on his body help us to identify him easily. One is of a cross-shaped tattoo that is inked on his forehead. The other is an orb-shaped earring made on his body. 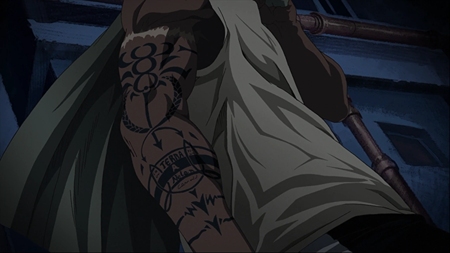 Scar is a tall, muscular man with a dark complexion and red irises of the people. The right side of his arm is inked with a complex tattoo running all the way from his scar on the bicep to his wrist. The Alchemical tattoo represents the symbols of the alchemical society. 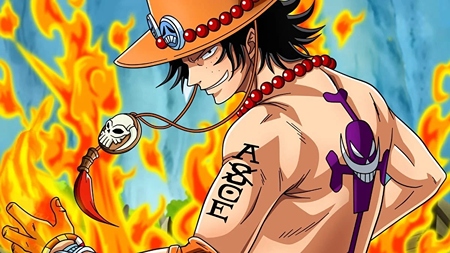 Ace is a tall young man with wavy black hair. The tattoos on his body were some of his trademark features. He has a tattoo on his back representing White Beard Symbol, with bones of purple color at the back of a purple skull having a white mustache.

The tattoo of Ace signifies his pride and joyful nature. He also has a tattoo that reads “ASCE” on his left bicep, with the letter “S” canceled out. Ace’s tattoo has a deep meaning.

Here, A denotes Ace, S denotes Sabo, his brother who was dead; that’s why he canceled his letter, C represents Crybaby, his little brother, and E means Edward Newgate, his godfather.

Hope you all liked reading our article List of 20 Anime Characters with Tattoos. Tattoo lovers can definitely get such amazing tattoos inked on their bodies. You can even get the Best Anime Tattoo Ideas from them. We will be back with another exciting article to read. Till then, enjoy this one and stay tuned to our article.