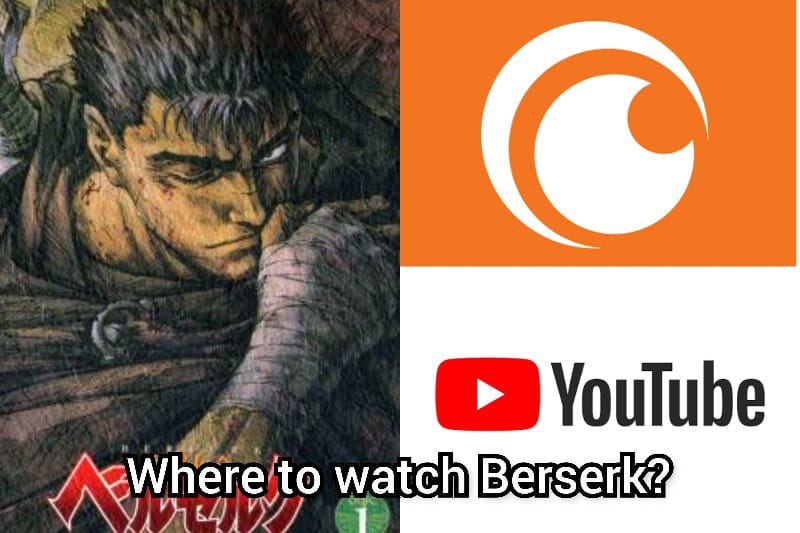 Berserk is one of the most beloved Seinen anime series that aired in 1997 under OLM studios. In 2022, many fans are wondering where and how to watch Berserk anime due to some license adjustments. If you are one of them or have the same query, then you have landed on the right page.

The answer to the question, “Where to watch Berserk anime” is: Berserk (2016) anime is available on Crunchyroll (US) and VRV with all 24 episodes in English dub and sub. Berserk films “Golden Age trilogy” are available on Netflix (US). Right now, Berserk (1997) is obtainable only on YouTube under private channels in English dub.

Note- As of January 2022, there is no single legal platform in the US that provides Berserk (1997) in English dub.

Later in this post, we will discuss more on the Berserk watch guide and some other questions. So, without any further delay, let’s begin.

“Berserk” Anime where to watch?

Crunchyroll (US) and VRV are the best platforms to watch Berserk (2016) under ad-support format in English dub and sub. It is also available on Netflix but only in India, Hongkong, the Philippines, Thailand, and Malaysia. Fans across the US can also watch Berserk (2016) on HBO Max under a paid subscription.

Netflix (US) is the best platform to watch Berserk (Golden Age Arc). The Egg of the King, The Battle for Doldrey, and The Advent, all three Berserk Golden Age Arc movies, are acquirable on Netflix in English dub for the US, Canada, France, Germany, and Switzerland. You can also use VPN to view the Golden Age arc from different regions.

The original Berserk series, “Berserk (1997),” is presently not available on any legal platforms for many regions. The only way to watch is by directly searching on YouTube. Many channels have already updated Berserk (1997), all 25 episodes in English dub.

Hence, if you are from any region, just advance to YouTube and search for “Berserk 1997 Episode 1,” you will get the appropriate results.

The other way to watch Berserk (1997) is to purchase its English Release Blu-Ray or DVD from the stores. At this time, there is no Blu-Ray release in North America, and the DVD releases are also all out of print.

Therefore, here we recommend first trying to purchase it from the stores, and if not available, you can jump on YouTube.

Right now, Berserk is not available on Hulu (US). In the past, Hulu had all Berserk episodes, but now its license is expired. Fans can advance on either Crunchyroll or VRV to watch Berserk (2016) Season 1&2.

2) Is Berserk on Netflix?

Netflix has Berserk (2016) series and Berserk (Golden Age Arc) movies, but for different regions. Below we have mentioned the best way to understand.

In contrast, fans from other regions have to purchase a good VPN to watch the Berserk series from any part of the world.

3) Is Berserk on Funimation?

Yes, Funimation (US) has Berserk but only the Golden Age Arc. You can watch only “The Battle for Doldrey” and “The Advent” on Funimation under the Premium section in English and Japanese dub. Also, currently, Crunchyroll is the better option than Funimation to watch Berserk.

4) Is Berserk on Crunchyroll?

Crunchyroll has all 24 episodes of Berserk (2016) in English dub. You can watch it with ads and without any registration id in the US region. Like Crunchyroll, VRV also has Berserk Season 1&2. Below in the post, we have mentioned the steps to watch any anime on Crunchyroll or VRV across the world.

5) Is Berserk on Prime Video?

Like Crunchyroll, Prime Video (US) also has all episodes of Berserk (2016) and The Golden Age Arc in order. To view it, you need Prime membership, or you can purchase it digitally at your convenience.

How to watch Berserk in order-

The above mentioned is the chronological order for the Berserk series. You can follow this order to understand the plot better.

Berserk is an exclusive anime with action, adventure, drama, fantasy, horror, and supernatural. It was first released in 1997 and then categorized into three parts according to the release date.

The original Berserk series and the Golden Age Arc have the same story. The Golden Age Arc is the remake of Berserk (1997), in which the plot is completed within three movies, “The Egg of the King (2012), The Battle for Doldrey (2012), The Advent (2013).” After the movies, the anime is continued with the 2016-17 series that comprises 24 episodes. Therefore, we can estimate there are a total of 49 episodes (excluding movies) in the Berserk series, and each episode is of 25 minutes (along with theme).

Berserk is one of the most long-lived animated series with almost 20 years of hiatus. Within the time span of at least two decades, Berserk has released only 49 episodes. It is the best gory action anime where the story revolves around a person named Guts. He is a young mercenary who travels worldwide to eliminate various creatures with his large black sword. He does numerous kinds of jobs in exchange for money. One day, he meets with the Band of Hawks, and from there, his life changes.

Here, we conclude our article on “Berserk Anime where to watch” along with other queries. We hope you like it. We will be back with another post. Till then, stay tuned with us and read the articles below.

Q1 Where can I watch the Berserk movies?

Ans. You can watch Berserk movies only on Netflix (US).

Q3. Where can I watch the original Berserk?

Ans. You can watch the original Berserk by purchasing its Blu-Ray or DVD or by searching it on YouTube.

Ans. Berserk 2016 is available on Crunchyroll, VRV, and HBO Max.