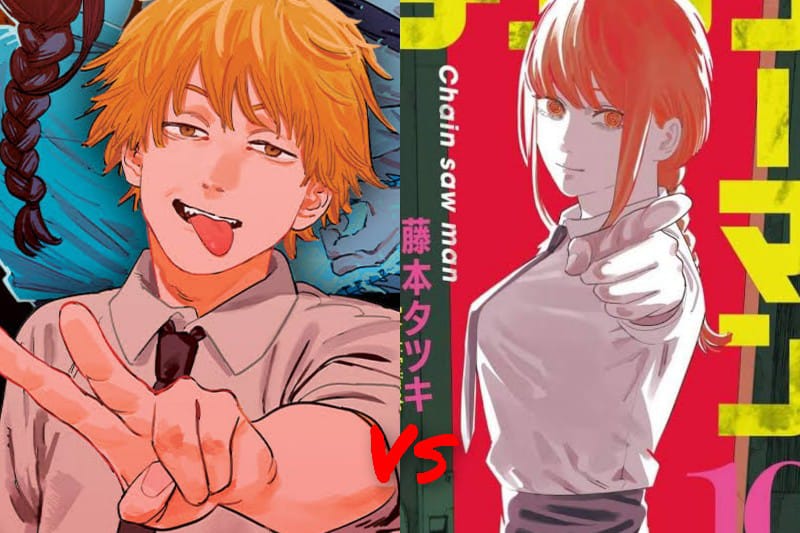 Chainsaw Man is a manga written by Tatsuki Fujimoto which centers around an orphaned young boy named Denji who is trying to pay off his father’s debts.

In the process, he encounters a devil called Pochita, who he befriends and who later fuses with Denji.

One question that fans of Chainsaw Man will be curious about is ‘Who is stronger, Makima or Denji?‘

Denji surpassed Makima by the end of the Chainsaw Man manga. Therefore, he is stronger. In the fight between Denji vs. Makima, Denji won by defeating and eating her. Both Denji and Makima, in other words, the Chainsaw Devil and the Control Devil, are the most powerful devils in the Chainsaw man manga series.

Later in this article, we have explained a power comparison between them. Read more to find out about their powers and why Denji is stronger!

Denji is the titular character – The Chainsaw Man, and the main protagonist of the series.

Denji is an orphaned boy who, after meeting Pochita, becomes a Devil Hunter to clear the debts he inherited from his father, who owed money to the yakuza.

The yakuza controlled by a devil betrays Denji, which leads him to his demise. He is saved by Pochita, as Pochita fuses with his heart, and he becomes the Chainsaw Devil.

Later, Makima finds him, and he is fascinated by Makima and agrees to become a Public Safety Devil Hunter working under her.

After Pochita becomes his heart, Denji acquires the ability to transform into the Chainsaw Devil. When Denji takes on this form, a considerable chainsaw protrudes from his head. Denji requires ample blood supply for his transformation.

Becoming the Chainsaw Devil amplifies his strength to fight off other stronger devils. Thanks to his Devil powers, Denji is strong enough to catch a car thrown at him.

Denji speed multiplies when he is in his Devil Form, and he can react and move faster during his fights.

He is able to rapidly heal from any fatal wound if he consumes enough blood. Denji was able to re-attach one of his arms after he lost it during a fight.

Denji transformed into a complete devil after giving up his contract with Pochita. Denji is ten times more powerful in this form, with his speed and strength increased tenfold. He was able to defeat several devils in this form easily.

Denji needs enough blood to transform into a Devil or to manifest any of his Devil powers. If he loses much blood, his Devil powers are rendered useless, and he becomes weak and tired.

Denji is not the sharpest thinker except for the times when he is fighting devils. Denji has a rash and brute way of battle without any planning, which leads him to get injured more often. He was also easily manipulated and betrayed by both the yakuza and Makima and suffered a significant loss because of this.

Makima is a beautiful woman and the main antagonist of the series. She is highly cunning and emotionless, and her only goal is to be together with Pochita.

Makima is willing to use and then hurt anyone to reach her goal and is a master manipulator. She is a high-ranking Public Safety Devil Hunter and takes Denji under her.

She is also the Control Devil, which lets her control anyone from humans to devils and borrow their abilities.

Makima being the Control Devil, has the ability to exert fear on others and make them bend to her will. This also lets her borrow the abilities of whoever is under her control.

Makima can deal immense damage to her opponents without coming in contact with them; for them, it will be like an invisible force crushing them. To instantly destroy someone from a long distance, Makima requires the name of the target and a human sacrifice.

Makima can borrow the ability of other organisms to hear and spy in on conversations. She can also distinguish people by their scent since she has a strong sense of smell.

Thanks to her Control Devil powers, she can force others to create a contract with her. She coerced the Prime Minister of Japan into having a contract with her in exchange for her service in Japan. This contract enabled her to transfer any of her injuries to the residents of Japan in the form of an ailment/illness.

Makima, like other devils, can regenerate and heal her wounds with the consumption of blood.

Makima’s contract creation ability is both a boon and bane for her. Anybody who knows the conditions for her contract can nullify the contract and perhaps, deal damage to her.

Denji was able to win during his last fight with Makima and managed to defeat her. Though he was overpowered by her during their hand-to-hand combat, he was later able to sneak up on her and land the final blow.

Makima is nearly invincible, and we have not seen the full potential of her Control Devil powers. In addition to that, she has claimed that she has defeated The Chainsaw Man once before.

In terms of experience and proper control of abilities, Makima stands higher than Denji, and in terms of brute force and spontaneity, Denji stands out more than Makima.

Denji’s Chainsaw powers considerably enhance his speed, strength, and endurance, which always has given him an advantage while battling with other devils. However, Denji does not put much thought into his attacks; besides, Denji is someone who uses more brawns than brains.

Makima, on the other hand, was easily able to manipulate Denji into submission and had him listen to all her bids. Makima, in a similar fashion, was able to control several others into doing her bidding, which included even dying for her.

She also has the terrifying ability to destroy her opponent from a long distance and can also point her fingers at her opponent and push out force from them enough to deal severe damage.

Makima obliterated Power with this ability, but it did not work on Denji since the Chainsaw Devil could withstand her abilities.

Denji could aim for Makima by impregnating his chainsaw with Power’s blood and then slashing it through Makima even though he knew this was not enough to overpower Makima.

Finally, to make sure Makima did not regenerate, he consumed Makima, making it impossible for her to come back.

Where to read Chainsaw Man manga?

You can check out the manga on Viz or Mangaplus. A second season of the manga is coming in 2022, and an anime adaptation is in the works. Come back for more updates!