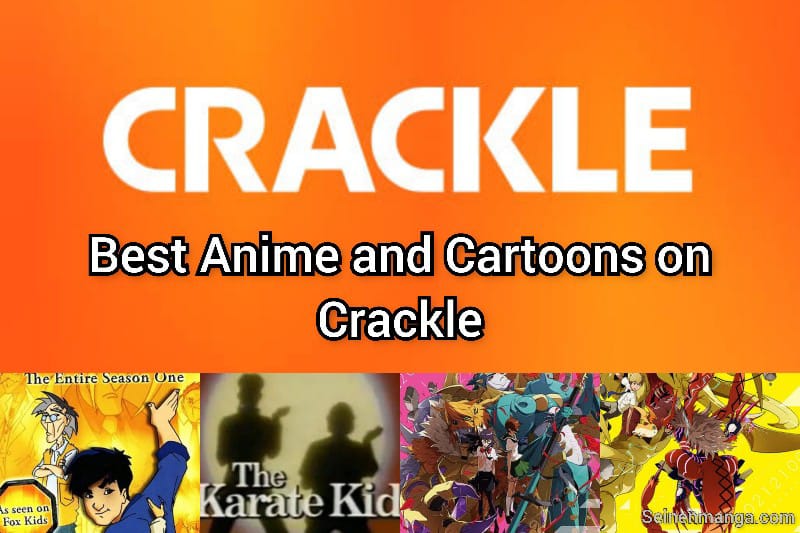 This year many fans have asked a question, “Is there anime on Crackle?” Like other platforms, Crackle is also a video streaming service owned by  Chicken Soup for the Soul Entertainment. For watching original TV shows and other movies, Crackle is one of the best platforms. But what about anime?

Anime is the Japanese animation that is currently popular worldwide. In the past years, Crackle had a collection of anime, but presently only Digimon Tri movies are available on it. First, I was planning to make a list of all the best anime on Crackle. But after going through it, I discover that there aren’t anime series available. Therefore, left with no choice, I’ve made a list of the best anime on Crackle as well as the top 6 best American cartoons that you can watch with your family. So, without wasting any time, let’s begin.

Must Read- Where Can I Watch Naruto Shippuden Series

The story begins after 3 years since the Digital World has been closed. Taichi Yagami and his friends are living a normal life. All of them are slowly drifting apart, thinking about their future. One day, a malfunction is happening to all the electronic devices across Odaiba. By deep divining into it, Taichi finds out that something unusual is going on in the Digi World that is causing problems even in the human world. So, how will Taichi find the mystery behind it and help everyone?

The story continues, and now the real world is threatened by the infected Digimons. These digital monsters have sudden power growth and act strangely in a frenzied manner. The plot follows between the two Chosen children, Mimi and Jou. On the one side, Mimi is facing problems in Japan after livings for years in the US, and on the contrary, Jou decides to avoid all issues related to Digimon. So, how will these two collaborate with all other Chosen children to fight against the infected Digimons?

During the battle, the twist comes when a Digimon named Meicoomon to betray the Chosen children and her human partner, Meiko Mochizuki. After discovering, they find out that Meicoomon is infected by the unknown virus. Later on, they realize that Takeru Takaishi’s partner, Patamon, also shows the same symptoms. Now the only option left to save the human world as well the Digital World is to “Reboot” all the Digimons. However, this Reboot will erase the memories of Digimon. Now, what the Chosen children will do?

After the digital reset, the Digimons have no memories of their human partners. All the Chosen children have been reunited and tried their best to recollect the memories of their respective Digimons. However, they have been caught in the incident which separates them in the different regions of the Digital World. Meanwhile, Meicoomom is the only one who somehow recollects the memory of her partner Meiko. So how will the Chosen children find the way to return home safely?

The plot follows when Homeostasis categorizes Meicoomom, a threat for both the human and the digital world. Meicoomom digivolves to Meicrackmon in the infected form and leaves into the distortion between the two worlds. Another threat is materializing of the Digimon in the human world. To avoid any further destruction, Homeostasis decides to eliminate Meicrackmom. Now only Meiko is the one who can save Meicoomom by surpassing her darkness.

The last movie of the Digimon Adventure series revolves around the fight to save Meicoomom from Ordinemon. Homeostasis recommends rebooting all the digital technology in the Real World to stop Ordinemon. But it will destroy all the artificial electronic connections. So, how will the Chosen children save humanity?

Must Read- Does Funimation have One Piece? (2022) | Latest Updates

The adventure story of two karate practitioners, Daniel LaRusso and his mentor, Mr. Miyagi, who set on the journey instead of participating in the karate tournament. During their journey, they encounter a quest to find a miniature shrine with magic powers. Now along with Okinawan girl Taki Tamurai, they all three wanders across the globe and fight various obstacles.

Adventures In Zambezia is a 3-D animation film that revolves around the life of the birds. This animated movie is for all age groups. The movie has won the Best Animation at the South African Film and Television Awards. Thanks to Triggerfish Animation Studios for providing fantastic animation. The story follows the adventure of a high-spirited falcon, Kai, in Zambezia, the city of birds.

The magical action aminated series begins when Howard, a young magician, knows that the events in the Frozen Kingdom and the Undersea Kingdom have become a danger to their World. With his father, Uncle Randolph, and Dr. Henry Armitage, he set a journey to Antarctica to prevent the awakenings of the evils.

Another animated comedy series, Dilbert, exhibits the daily life of a middle-aged white-collar office worker named Dilbert. He is very intelligent and can solve any problem related to electrical engineering. However, the problem he is unable to express his solution to anyone. Although his position in the workplace is not great, that’s why he is unable to eliminate the insufficient decisions made by the other office cooperates. This series displays the city life of the ordinary person in the office.

The Jackie Chan Adventures is an American animated series produced by Sony Pictures Television. It has a lot of comedy and action in it. The story follows in the world where magic exists along with demons, ghosts, spirits, various creatures, and gods. In this powerful world, the protagonist Jackie Chan is a professional archaeologist with knowledge of martial arts lives with his uncle and his niece Jade and his close friend Captain Black. So, how his adventure story follows?

Want some horror comedy-action series? Then the Real Ghostbusters is best for you. The adventurous story follows the four Ghostbusters, Dr. Peter Venkman, Dr. Egon Spengler, Dr. Ray Stantz, Winston Zeddemore, who investigate, chase, and capture the various spirits and ghosts all across the world.

Here we conclude our list of both the best anime as well as best cartoons available on Crackle. Hope you enjoy it. We will be back with another list. Till then, stay tuned with us.

Q1. Is there anime on Crackle?

Ans. Yes, but only the Digimon Adventure Tri series is currently available on Crackle.

Q2. Does Crackle have anime?

Ans. No, currently, Crackle is not good for watching anime.

Does Funimation have Naruto Shippuden (2022)