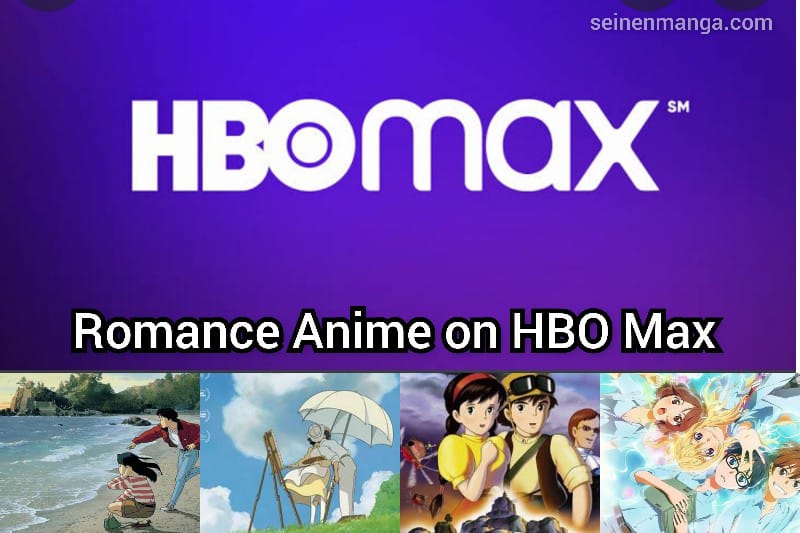 HBO Max is one of the greatest video streaming services worldwide. It is an American subscription-based service that is currently accessible only to the U.S. and 39 territories across Latin America and the Caribbean. Not only TV shows and movies, But HBO Max also has a vast library of Japanese animation and Studio Ghibli collection too. From romance to action, or horror to mystery, every genre of anime are available on HBO Max. Therefore, in this post, we will discuss the list of Top 15+ Good Romance Anime available on HBO Max, which you can watch in 2022.

Everyone loves the romance genre because it displays the slice of life through which many of us compare our lives with these animated series. It charms your mood or sometimes reminds your happy or sad life moments. So, this New Year 2022, let’s enjoy some of the best romance anime you can watch on HBO Max.

The plot begins when a high school student Taku Morisaki meets his friend Yutaka Matsuno who introduces him to a new transfer girl, Rikako Muto. She is a beautiful girl with a good brain, but her unpleasant attitude leaves her with no friends except for Yutaka and another girl of the same class. After meeting Rikako, Taku falls in love with her. So, how Taku will express his feelings to a girl with a troubled past.

In/Spectre is a story of two realms, i.e., Youkai and Humanity. Youkai are the spirits who live alongside the human world. A girl, Kotoko Iwanaga, who becomes a “God of Wisdom,” works as a mediator between the two worlds. With her supernatural power, she can help anyone. One day, she visits to meet Kurou Sakuragawa, a high school student who is sad about his break-up. She discovers a strange supernatural feeling from him. Therefore, she asks Kurou for some help in her job. From then, their story begins.

Another good romance movie on HBO Max is Ride Your Wave. Along with romance, it has too emotional scenes. This movie shows how loving someone can live anyone’s life. It is a story of a 19-years-old spirited girl, Hinako Mukaimizu, who is carefree about her life and loves surfing, and a 21 years-old boy, Minato Hinageshi, who is a firefighter and loves to save everyone. One day they both meet in a fire accident from where they start to spend time with each other. However, one day, when an incident happens which will change Hinako’s life forever.

Kiznaiver is a sci-fi romance anime available on HBO Max. The plot begins when the protagonist, Katsuhira Agata, forgets his sense of pain. Now without any sense of pain, he is living his life peacefully. One day, a strange incident happens where he, his friend Chidori, and four other teenagers are forced to join the Kizuna System as official “Kiznaivers,” where their pains are connected. So, how does Katsuhira manage to hide his truth while saving others?

From Up on Poppy Hill is a Studio Ghibli movie with a historical school romance. It has a beautiful story of a boy, Shun Kazama, who is a writer, and a girl, Umi Matsuzaki, who raises flags for the ships. One day, they both meet in the school to work with other students to save their old clubhouse. After meeting and becoming friends, they both fell in love with each other. However, Shun is an orphan who doesn’t know about his past. Therefore, they both decide to unveil Shun’s true identity.

Rurouni Kenshin has an interesting plot where a legendary merciless assassin named Hitokiri Battousai leaves the battlefield mysteriously at the peak of the Japanese Revolution. After ten years, people are still feared his name. He changes his identity to Kenshin Himura and starts to live a peaceful life by vowing not to assassinate anyone. Now he begins to help the poor in an effort to repent his sins. One day, he saves a girl Kaoru Kamiya from a man who claims himself to be Battousai. After the help, Kaoru offers him to leave in a dojo, and from then they both start living together.

Weathering With You is also one of the best romantic movies with a slice of life. The story follows when a high-school boy, Hodaka Morishima, who in search of a part-time saves an orphan girl, Hina Amano, who is also looking for a job from a shady man. They both become friends and spend time with each other. Later on, Hodaka discovers that Hina has an incredible power to call out the sun whenever she prays. After witnessing this ability, Hodaka suggests Hino to become a “Sunshine girl.“

The Testament of Sister New Devil is an Ecchi romance series. This anime series is not recommended for children. The story begins when Basara Toujou’s father suddenly introduces his new stepsisters, Mio and Maria, and he has no choice but to live along with them. Later on, he discovers that these sisters are the demons, Mio is the Demon Lord’s only daughter, and Maria is her servant. However, he is also forced to reveal his true identity as a “Hero,” the sworn enemy of the demons. But the twist he chooses his family over the clan and determines to save his sisters from the external dangers.

A beautiful romance movie by Studio Ghibli, The Wind Rises, follows around Jirou Horikoshi, who leaves his hometown to graduate in Aeronautical Engineering. So that he can pursue his dream of designing planes. During his journey, an earthquake appears in which he saves a life of a maid and a young girl named Naoko Satomi and leaves without telling his name. Years after, he meets the same girl and falls in love. However, some situations are not favorable this time. So, how will Jirou manage?

Whisper of the Heart is a beautiful romantic movie with a slice of life in it. The plot begins when a 14-years-old girl Shizuku Tsukishima decides to search for the boy who enjoys the same reading for literature. On her journey, she meets a magical cat who guides her to a boy named Seiji. In no time, they become friends by sharing the same love.

Castle in the Sky is an adventure fantasy story of two people who fall in love with each other. Sheeta, a young girl who is kidnapped by the Government ship, but later on, the ship is attacked by a pirate ship, and during this fight engagement, Sheeta decides to run away. Upon an escape, she meets a boy Pazu, who is on the journey to reach the fabled flying castle, Laputa. Sheets joins him in the journey. From there, the adventurous story of the two youngsters begins.

Food Wars is not particularly a romance anime, but it has many Ecchi scenes. The interesting plot follows when a boy, Souma Yukihira, who is an expert and has a passion for the creations of foods, suddenly takes admission to Tootsuki Culinary Academy, an elite cooking school. His father decides to close his family restaurant so that Souma will only focus on his academy, where only 10 percent of the students graduate. So, how Souma will manage to compete other top-level students.

One of the greatest Studio Ghibli’s movies with romance and magic is Howl’s Moving Castle. It is also one of my personal favorite movies. The story begins when a girl named Sophie meets a great wizard named Howl. Later on, she encounters the Witch of Waste, who turns her into a ninety-year-old lady. Now she sets her journey to find the solution where she meets a talking scarecrow who leads her to the Howl’s Moving Castle. After getting into the castle, she sees a fire demon named Calcifer who makes a deal with Sophie to break her curse if she breaks his link with Howl. So, what will Sophie do now?

InuYasha has an award-winning story where a fifteen-year-old girl, Kagome Higurashi, falls into a cursed well and ends up in the 500 years past. During the Sengoku period, she discovers that she has a wish-granting jewel called Shikon Jewel, which is the demon’s true target. However, in the battle, the jewel scatters. Later on, she helps a young hybrid human-dog named InuYasha. After befriending him, they both set on a journey with the orphan fox-demon Shippo, the intelligent monk Miroku, and the lethal demon slayer Sango.

The greatest romantic anime of all time is Your Lie in April. If you want the best romance anime on HBO Max to watch with your partner, then this drama is best for you. The story follows when an incredible pianist Kousei Arima falls into the downturn after an unusual incident. Now he can’t hear the voice of his own piano. After two years of living a colorless life, one day, Kousei Arima meets a beautiful violinist Kaori Miyazono who will change his life. This is a must-watch love animated series with a happy ending.

Here, we conclude our list of Top 15+ Good Romance Anime on HBO Max, which you can watch this New Year 2022. Hope you like this list. We will be back with another ranking article. Till then, stay tuned with us.