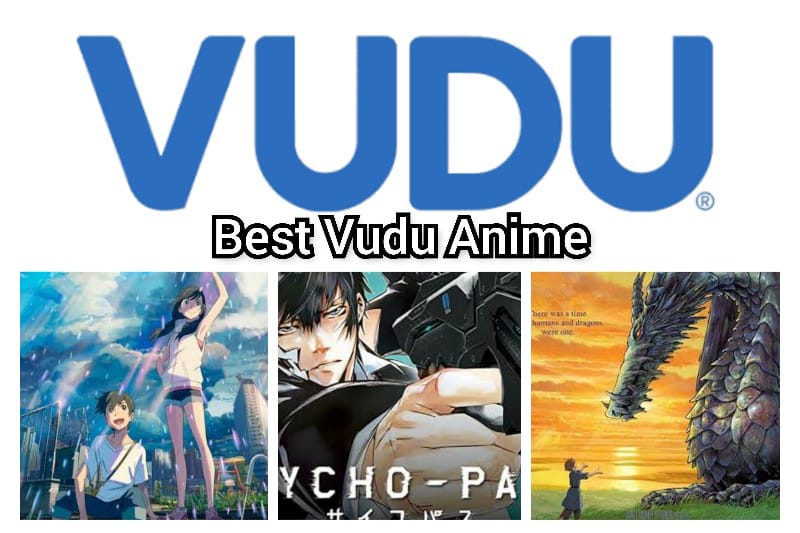 Vudu is one of the most famous streaming services with a collection of more than 150,000 series and movies that are available for purchase or rental. But some of the popular series and movies are also accessible with ad-supported viewing. Also, for Japanese animated series and movies, Vudu is a great choice. Therefore, in this post, we will rank the list of Top 15 Best Anime available on Vudu that you can binge-watch. These anime are the most popular worldwide, and the rankings are assigned based on IMDb score.

Vudu is a great platform to watch anime like Netflix, Crunchyroll. However, the only catch is that Vudu is currently available for the US and Mexico region. But don’t sweat in this article; we will also guide you on how to access and use the Vudu service from anywhere in the world. So, without any further ado, let’s begin.

How to Watch Anime on Vudu-

Vudu is a streaming platform that does not require a monthly subscription fee. Instead, fans have to pay for each anime episode or can buy or rent the particular session. The pricing range can be started from $0.99 to $24.99 (per session or movie). Anyway, some of the anime are available with an ad-supported view. So, how can you access Vudu?

Vudu app is available on both Android and iOS but only for the US and Mexico.

Vudu platform can be accessible worldwide by using VPN. VPN allows you to form a private network of any country for those who don’t know.

You can download the Vudu app apk from Google and access it via VPN as mentioned above.

Weathering with You is a romance movie with a slice of life. It has an emotional fantasy story where a high-school boy, Hodaka Morishima, and a young girl, Hina Amano, meets during an unusual incident. They both are poor and currently looking for a job. Later on, Hodaka notices that Hina can call out the sun whenever she prays for it. Therefore, he suggests Hina become a “Sunshine girl” who brightens the light of everyone’s life.

Fire Force anime focuses on the clash between the unordinary peoples who can use, manipulate or control flames. These peoples are categorized into three generations; the first generations are called the Infernals, who have become violent flame creatures. The second and the third generations are called the Pyrokinetics, individuals who can maintain the human form and manipulate fire. To counter the terror of the Infernals, the Special Fire Force is appointed where the protagonist, third-generation pyrokinetic Shinra Kusakabe, is selected for the member of this force.

The Seven Deadly Sins or Nanatsu no Taizai has a completely different plot. 3000 years ago, the Gods, the Demons, Giants, Fairies, Witches, Humans, and other species were in the Holy War battle.

However, the Holy War ended, and the gods sealed the Demons. To eliminate the demons’ remnants and protect their kingdoms, magic knights are appointed. It is a story of 7 powerful magic knights of the Liones Kingdom who have committed crimes and hid at different places. But after 10 years, Princess Elizabeth is on a mission to reunite all the seven knights to protect her kingdom from the demons.

Food Wars is an Ecchi school anime series with a lot of popularity. If you like cooking, then this anime series is best for you. The plot comprises a fifteen-year-old boy, Souma Yukihira, who loves to cook and create many new dishes. He works in his father’s restaurant. After witnessing his passion for cooking, his father sends him to Tootsuki Culinary Academy, an elite cooking school. This cooking school is popular because only 10 percent of the students can graduate from it. So, how will Souma’s cooking love help him graduate from school?

Psycho-Pass is an action psychological anime series with suspense. It has a plot of futuristic Japan which is governed by a new law called the Sibyl System. In this, a biometric computer scans the brain of the normal citizen and then, based on their mentalities, gives a crime coefficient number that shows the citizen’s criminality potential. The number decides whether the normal citizen is fine or put in jail by the police. This assessment is called the Psycho-Pass.

In this section, we refer to both Naruto and Naruto Shippuden series. Naruto is one of the big three shounen anime. The plot is about the ninjas who use chakra to form various Jutsu. In an era where the battle is going on between the shinobi of the different villages. The series portraits the journey of a young boy, Naruto Uzumaki, from the village’s weakest ninja to the lone hero of the Hidden Leaf Village.

JoJo’s Bizarre Adventure is the most-loved anime series on Vudu because all 5 seasons are available. If you want some action-adventure drama with the involvement of the supernatural power in it, then JoJo’s Bizarre Adventure is best for you. Every season of this series is unique but connected to the previous one. It has an adventurous story of the Joestar family having supernatural powers.

One Punch Man is the most comedy anime series on the list. One Punch Man displays that to obtain great power, you’ve sacrificed everything. Saitama, an ordinary human, wants to become a hero, so he trained himself very hard by doing 100 push-ups, 100 sit-ups, 100 squats, and 10 km run every day for 3 years. Even if his bones cracked, he completed his training. During 3 years, he accidentally removed his limiter, and in exchange for his hair and emotions, he became the strongest character in the universe.

Attack on Titan is one of the best Vudu anime. It is the most loved Seinen anime worldwide. It is a story of the war between humankind and the humanoid giants called Titans (with unknown origin).

After being defeated, mankind constructed colossal concentric walls that were even too humongous compared to Titans and started living peacefully behind the walls. The plot begins after 100 years when a Titan equal to the size of the wall suddenly appears from the sky and destroys the first line of the wall.

Demon Slayer is the best anime on Vudu. It is currently one of the most popular series worldwide. Its first season and Mugen Train movie broke too many records in popularity as well as in net sales.

It is a highly recommended anime series to watch. It is a story of the past where demons devour humans at night, and to eliminate them, Corps are appointed to eliminate them. The plot revolves around a kind boy, Tanjiro Kamado, who wants to take revenge on the demon who slaughtered his family one night.

This conclude our list on Top 10 Best Vudu Anime that you can binge-watch along with the guide. We will be back with the next ranking list. Till then stay tuned with us and read the article below.