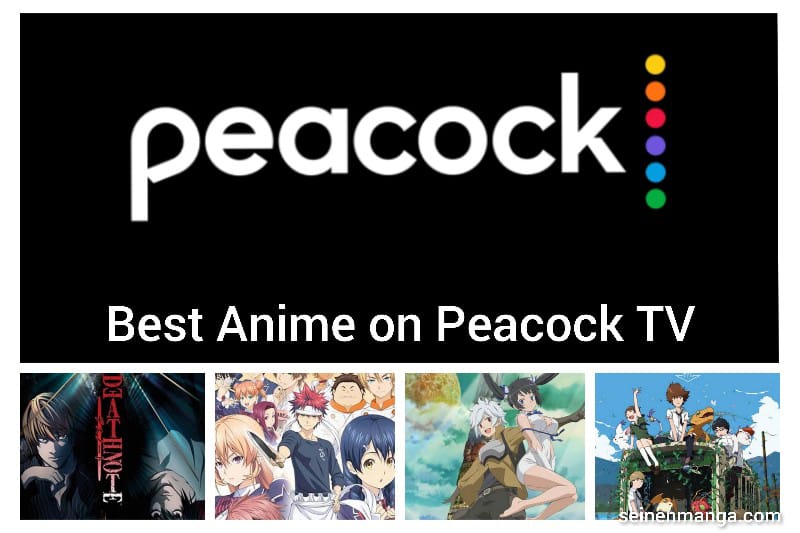 Japanese Animation or Anime is a modish word for entertainment. It has already surpassed all the modern cartoons and now even challenged top TV shows. Not only Netflix, Crunchyroll, or Hulu, but all the other official streaming sites like Peacock, HBOMAX, etc., compose their own list of best anime.

The anime sector has obtained extreme popularity among people worldwide. It’s all because of the vast genres with good plots. Hence, in this post, we have discussed the Top 15 Best Anime on Peacock TV. The list embraces both anime series and movies. Also, the ranking is based on the IMDb score. So, without any further pause, let’s begin.

The story follows a world where people fight monsters in the dungeons to get some crystals. These crystals are used to craft magical items or exchanged for money. In the city of Orario, a 14 years old boy, Bell Cranel, wants to become the greatest adventurer. One day he meets a goddess, Hestia. With her support, he follows the path of achieving his dreams.

Another sports anime is Ahiru no Sora. It is a basketball anime with a lot of comedy and drama with a motivational life lesson. Sora Kurumatani is a high school boy who loves basketball; however, he struggles with his short height. Despite lacking the main asset, he joins the basketball club wholeheartedly to compete in the tournament. However, in the club, he discovers that everyone has lost their passion for basketball. In the hope of reviving the club, he challenges everyone for a match against him where his quick feet overwhelm them.

The plot revolves around three school students, Yuki Cross, the daughter of the Cross Academy’s headmaster, along with Zero Kiryuu, the other disciplinary committee member in the Cross Academy. The Cross Academy runs two shifts; The Day and The Nightshift. The students of the Nightshift are the vampires. Yuki is glad to meet Kaname Kuran, a pureblood vampire and the leader of the Night Class. Ten years ago, he saved Yuki from a vampire attack. From that, she starts to develop feelings for him. On the other hand, Zero Kiryuu holds a deep grudge against the vampires and plans to eliminate them.

The movie Digimon Adventure tri. Part 1: Reunion is the continuation of the Digimon series. After Digimon Adventure, the gate of the Digital World has been sealed for three years. All students have already followed a new path. Meanwhile, Taichi Yagami is still unsure about his future. However, one day, his life changed when a Digimon Kuwagamon arrived in the human world and disentangled all the electronic items. Taichi Yagami followed the path to the Digital World to know the current situation.

No Game No Life is a game anime where gaming is everything. Sora and Shiro are step-siblings who are experts in online gaming, and the two have already conquered a lot of games with the username “Blank.” One day, Tet, a god of games from another reality, challenged them in a chess game. After defeating the god, the two are summoned into another realm known as Disboard. In this realm, to maintain peace, kingdoms organize different games. Now, they both have to survive in the new realm by conquering various games.

The first sports anime on this list is Megalobox. Megalo Box is a boxing sport in which the competitors used mechanical limbs known as Gears to upgrade their punches, speed, and reflexes. The story begins when an underground fighter named Junk Dog accidentally crashes into Yukiko Shirato, the CEO of Shirato Group. In response, Junk Dog clashed with her bodyguard, Yūri, a professional Megalo boxer. However, the fight was not carried on, but Yuri challenged Junk Dog to meet him in the professional Megaloboxing tournament.

My Teen Romantic Comedy SNAFU is a beautiful romance anime with a slice of life. The story follows in a high school where an apathetic student, Hachiman Hikigaya, who has no feeling or interest in any other student, meets another beautiful loner Yukino Yukinoshita in a service club. Despite having different personalities, they both offer help and advice to other students who are facing psychological problems in school.

Ranma ½ is one of the best old comedy anime with a slice of life. One day, Ranma Saotome, a top-class martial artist who accidentally falls into a cursed spring with his father. The story of the cursed spring is that whenever someone falls into this spring, they take the physical form of someone who drowned in the lake a thousand years ago. Therefore, Ranma is changed into a girl, and his father is transformed into a panda. But after splashing hot water, they can revert to normal. Now Ranma has to live a life with this fate along with a girl, Akane, who is also a great martial artist but hates men.

It is a story of Youko Nakajima, a young, talented, and humble girl who loves to take care of and help everyone in the school. She has a kind nature and always gets good grades in academics. However, she still finds it difficult to make friends because of her red hair. One day a blond-haired man, Keiki, meets Youko and bows his head in front of her. According to him, she is his master and belongs from a different realm. During this teleportation, they accidentally dragged two students of her class into a different realm. From here, the adventure of three students begins.

Food Wars, Chefs’ favorite anime, is also available on Peacock TV with all 5 seasons. Fifteen-year-old Souma Yukihira dreams of becoming the head chef in the family restaurant business. Customers like the way, Souma cooks, organizes, and presents the food for them. He has developed a passion and loves cooking. His father decided to put his name in Tootsuki Culinary Academy, an elite cooking school to test his abilities. This academy is famous for the “food wars,” a food competition between the students. And the best part is only 10 percent of students can succeed in this challenge.

Parasites are alien creatures that directly attack human brains and control them to feed on prey. These tennis ball-sized alien creatures can also morph humans into different forms. One night, a parasite attacked a sixteen-year-old student Shinichi Izumi but failed to take over his brain. Shinichi ceased this parasite into his right hand. Now they both have independent brains and are dependent on each other for survival. So, how Shinichi saves everyone with his new hybrid form.

In the ninja world, a beast called The Nine Tails Fox got sealed in a child by the Fourth Hokage, who also sacrificed his life. The child is Naruto Uzumaki of the Hidden Leaf Village, who desires to become the Hokage. However, because of the beast sealed inside him, no one talks to him, and he cannot use his chakra so, how Naruto will overcome all these hardships to achieve his dream. For the beginner, Naruto is the best anime on Peacock TV, to begin with.

Great Teacher Onizuka is also a comedy anime, presenting some great life lessons. Eikichi Onizuka, the ex-leader of a bike gang, dreams of becoming the most incredible teacher after witnessing that the teachers are pretty popular among the girls. He is not good at school lessons; however, he is perfect for life lessons, challenges, and pressures. So, how will he change his students to overcome psychological problems?

Death Note is my first anime. And if you’re a beginner who loves mystery and suspense, you will definitely love this anime. The plot begins when an intelligent student, Light Yagami, gets a Death Note from a Shinigami, Ryuk. The person whose name is written in the Death Note shall eliminate. After reading this rule, Light Yagami decides to eliminate every criminal from the world for the sake of justice. However, things get interesting when the world’s best detective, L, is appointed for this mystery.

Hunter x Hunter is also one of the best anime shows on Peacock TV. The world is full of ancient creatures, monsters, criminals, and other beings, and Hunters are selected to overcome these dangerous tasks. Gon Freecss, an a 12 years old boy, also decided to become a hunter to find his father. However, he soon realizes that he has to overcome many dangerous challenges on this path. Along the way to becoming an official hunter, he makes new friends, Leorio, Kurapika, and Killua.

We conclude our listing on the Top 15 Best Anime on Peacock TV. Also, if you’ve already watched the above list, you can proceed with the other anime shows available on Peacock TV. Luckily, it has its collection of Anime movies and shows. Below, I’ve mentioned the list of all anime.

How to Watch Anime on Peacock TV-

Presently, Peacock TV is available only in the USA. For the US Otakus, sign in with your mail id and watch anime for free. According to the recent official message, “NBC Universal’s Streaming Service is now available to Sky and NOW subscribers in the UK and Ireland at no extra cost.” It means people in the UK and Ireland can access Peacock TV free of cost with their Sky or NOW id.

People from other regions can access Peacock TV by using VPN. Kindly refer to the steps below.

That’s all for today. We will be back with another list article available on the different official platforms. Till then, stay tuned with us and read the articles below.