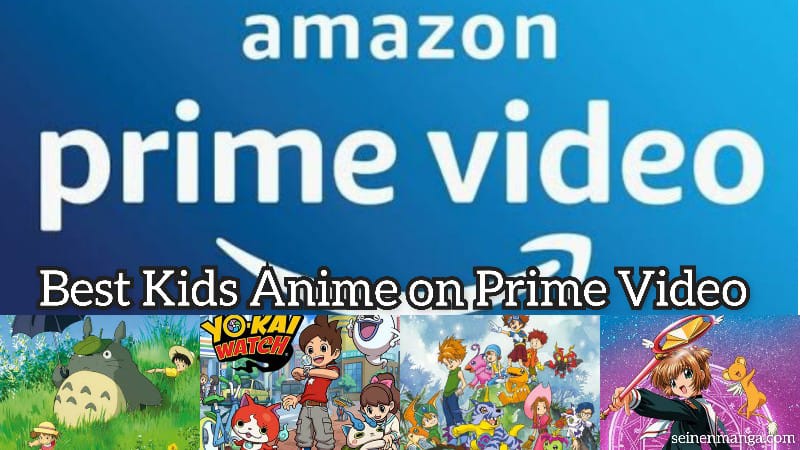 Anime is a Japanese animation style with dramatic themes like romance, action, comedy, horror, etc. Some people might think that anime is too intense for kids to watch, but anime is categorized for everyone. Therefore, today we are back with another list of 10 Best Kids Anime on Amazon Prime Video (US).

In today’s generation, it’s common to witness children fond of various cartoons or anime. Also, these cartoon movies or animation series are an excellent way for kids to learn about life lessons and values. Hence, we have listed some of the best kids’ anime readily available on Amazon Prime Video. Let’s begin.

Crayon Shin-chan is the most popular comedy-anime series for children. It is a must-watch anime series with over 1000 episodes dubbed in 30 languages and aired in 45 countries. Currently, it is unavailable on Amazon Prime Video (US), but you can watch it by using a VPN or on different platforms. Every episode has a different story that displays the daily life of a mischievous five-year-old boy named Shinnosuke (Shin).

Digimon is also kid-friendly anime with a lot of action. Presently season 1 of Digimon is not available on Prime Video (US). Fans have to use VPN for Japan to watch the whole series. Luckily the movies, OVAs, and some seasons are accessible for US fans. Digimon is a story of a digital world where seven kids who accidentally teleported have Digivices and Digimon to fight against the evil creatures.

Sailor Moon is also considered to be the best anime for kids. It is recommended for 13-year-olds children and above. It is a Shoujo anime with romance and true love. It is a story of a 14-year-old girl, Usagi Tsukino, who saved a talking cat, Luna, from the other children. And in return, Luna gives her a magic brooch that transforms her into Sailor Moon. Now she has become the protector of love and justice.

Cardcaptor Sakura: Clear Card is a kids anime series with two seasons available on Prime Video. It is also a girl protagonist anime with fantasy, comedy, and romance in it. Sakura Kinomoto, a middle school girl, desires to live a normal life like other children. But one night, she encounters a mysterious cloaked figure. Now she has to save everyone from an unknown evil with her magical cards.

Yo-kai Watch is also a great and knowledgeable anime for children. It is recommended for all age groups. The best part is Prime Video has all its three seasons with 100+ episodes. One day, a primary school student Keita Amano was wandering in the forest where he found a capsule. When he opened it, the ghost-like creatures called Youkai were set free after 190 years of imprisonment. They are delighted, so they decide to become the guardian of Keita and save him from the other Youkai.

The must-watch family anime with a lot of action is Avatar: The Last Airbender. It has three seasons with a total of 54 episodes available in both dubbed and subbed on Prime Video. The plot begins when two siblings Katara and Sokka, discover a 12-year-old Airbender boy named Aang, known as Avatar, frozen in an iceberg. After saving him, all three begin their journey to the North Pole to find a master Waterbender.

My Neighbor Totoro is a family anime movie of magic and adventure for all age groups. The story begins when Tatsuo Kusakabe relocates himself to the rural area with his two daughters Satsuki and Mei. One day, Mei meets a small, bunny-like creature who takes her to a giant, mystical forest spirit, Totoro. She befriends it and tells Satsuki too. From then, the two girls are living a life full of magical adventures and fantastical creatures of the woods.

Pretty Cure or Futari wa Precure is also one of the most famous kids’ anime. With four seasons and Prime Video availability, we highly recommend watching this action-comedy series. Two girls, Nagisa and Honoka, have the powers to transform into superheroes called “Cure White” and “Cure Black.” Now they have become the guardians of the planet Earth to protect everyone from evil darkness.

Pokemon is one of the best anime for children of any age group. Amazon Prime Video has a collection of over 100 episodes of different seasons. For non-prime members, it will cost around 3 USD per episode. Pokemon series is a journey of a ten years old boy, Ash Ketchum, who wants to become the best Pokemon trainer ever known. With this dream, he begins his journey from Pallet Town with his first Pokemon, Pikachu.

Ponyo or Gake no Ue no Ponyo is an animated movie. It is one of the most popular movies from Studio Ghibli, grossing more than USD 201 million worldwide. The film has also won the 8th Annual Tokyo Anime award. Not only for children, but this movie is also even for adults. Everyone likes its plot, animation, and themes. It is a mythical adventure of a five-year-old boy, Sousuke, and a goldfish, Ponyo.

Here we conclude our list of 10 Best Kids Anime on Amazon Prime Video. You can also add Doraemon to your watch list; however, it is not available on Prime Video. That’s why we haven’t mentioned it on our list. Fans can also advance over other platforms to watch their favorite anime or can use VPN. We will be back with another list article. Till then, stay tuned with us.