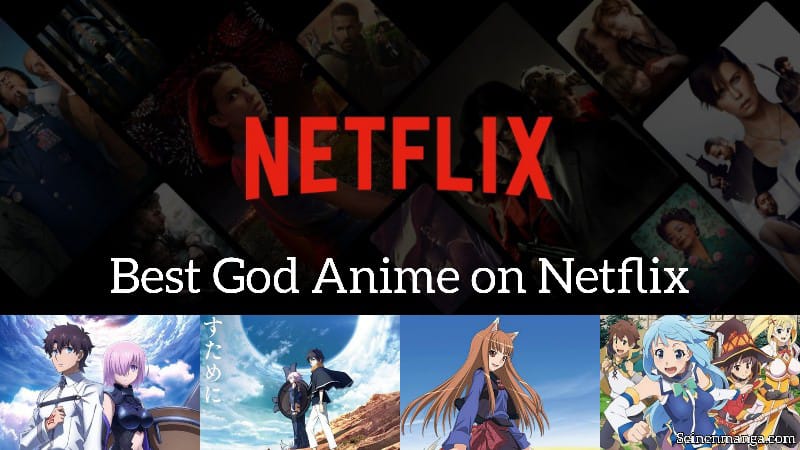 Anime has been widespread all over the world since the late ’90s. The hype of anime among people is getting increase day by day. We have seen and discussed plenty of anime series or movies with unbelievable genres. Therefore, here we are back with another fantastic title, i.e., Top 5 Best God Anime on Netflix (US) Ranked.

I know you are wondering about the God Anime. God Anime is the animation where we witness the involvement of a God either as a protagonist or deuteragonist. Below we have listed the rankings of the Top 5 best God Anime based on myanimelist ratings and available on Netflix US. So, without any further delay, let’s begin.

The best god anime on Netflix is Record of Ragnarok or Shuumatsu no Valkyrie. If you want to learn about the gods of Greek, Norse, and Hindu mythology, then this anime is perfect for you. However, its anime adaptation is not too good; that’s why we recommend you to read its manga.

Another flaw of the Record of Ragnarok is that some of the gods’ backstories, character design, and nature are not accurate. But, from the anime perspective, it has a great plot. There is a call for congregating every 1000 years to decide the fate of humanity. But this time, gods are in favor of ending humankind.

In the hope of saving humanity, Brunhild, a demigod Valkyrie, proposes giving them one chance to fight for themselves and enact Ragnarok, a one-on-one fight between man and God. The overconfident divine council accepts the challenge for an entertainment purpose. To stand against the 13 most powerful Gods, Brunhild has to search 13 history’s strongest individuals of humanity.

It has a story of the Middle Ages, where Holy Knights used powerful magic and skills to protect their regions from demons. In the kingdom of Liones, a group of 7 Holy knights known to be the strongest is called the Seven Deadly Sins. However, due to some mishappenings, they have to escape from the kingdom. After ten years, the princess of Lioness’s kingdom, Elizabeth, begins her adventure in search of the legendary knights, Nanatsu no Taizai, to save her kingdom.

Kamisama Kiss is one of the best god anime with plenty of romance and comedy. It is a Shoujo anime recommended for all age groups. Imagine one day suddenly you will be appointed for all the sacred duties without any god power. What will you do?

The same story has happened with a homeless high-schooler girl, Nanami Momozono, who saved a man. And he guides her towards a rundown shrine as a new home. Later on, she discovers that the man was the land god of the shrine, Mikage. And two shrine spirits and a fox named Tomoe mistaken her as a replacement of the God, Mikage.

Now she has to immerse herself in the divine duties, and for this, she will need the help of Tomoe, a fox who has already rejected to serve a human. Presently you can watch Kamisama Kiss Season 1 on Netflix US. However, its Season 2 is only available on Netflix Japan.

KonoSuba: God’s Blessing on This Wonderful World is an adventure God anime with a lot of comedy in it. It has a total of only ten episodes, and you can binge-watch it on Netflix US. The story revolves around Kazuma Satou, a high school boy who met an accident after buying a game on his way home.

But gaining consciousness, he finds himself in a different realm where a beautiful goddess named Aqua is sitting before him. She gives him two choices either go to heaven or reincarnate in a gamer’s world. Now in the gaming world, before defeating the enemies, he has to choose one partner, and he chooses Aqua.

But the twist is Aqua is entirely useless, and now he has to pay the living expenses of two persons in the different realm by doing the work along with completing the gaming tasks.

Spice and Wolf is a historical god anime with fantasy romance in it. It is currently available on Netflix with 15 episodes. This Netflix anime is also recommended for children above 13 years old. It’s a beautiful anime, and according to the good MAL score, we have ranked it at 2nd position.

The plot resembles a wolf deity, Holo, who is worshipped by the small town of Pasloe for blessing the annual harvest years ago. However, in the current century, everyone is dependent on harvest machines and self-capabilities. So, the festival is reduced to a mere folk tale.

One day, a traveling merchant, Kraft Lawrence, is passing through the town of Pasloe. Holo offers him to become his business partner if he takes her to the northern home of Yoitsu. And from then, the journey of a deity and a man begins.

Fate/Grand Order -First Order is an action God movie on Netflix US. It is an anime movie of 1 hr 14 min. So, if you like something only for your travel, then Fate/Grand Order is best for you. Its animation is incredible.

The plot revolves around Ritsuka Fujimaru, a young man, and the mysterious girl Mash Kyrielight who send back to the time to save humanity.

Here, we conclude the ranking on the Top 5 Best God Anime on Netflix (US). The list is mainly focused on American Otakus. Also, a maximum of anime is available in your region too. Otherwise, you can use VPN to continue your binge-watching. We will be back with another list. Till then, stay tuned with us and read the articles below.