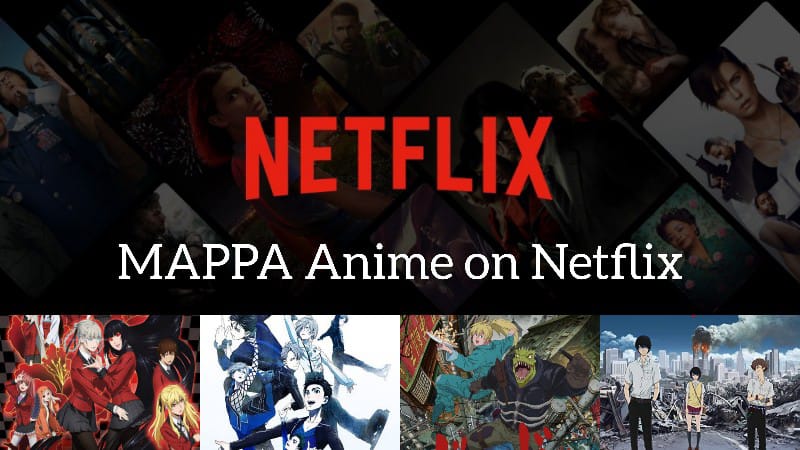 Netflix is a wonderful platform for all Otakus. It’s full of many different series that cater to every taste and for every mood. On the other hand, MAPPA is a Japanese animation studio that produces anime. It is popularly known for its fantastic animation. The only downside of MAPPA and Netflix is that there are so many choices. Therefore, we’ve researched and ranked the Top 5+ best MAPPA anime currently on Netflix and laid them out below!

Note: The list is ranked based on myanimelist score.

Kakegurui is the gambling sports Shoujo anime with lovely animation. The wealthy high school students who have taken admission in Hyakkaou Private Academy learn the reality behind the earning at night. To challenge the world, this academy teaches gambling to rich students.

It’s an interesting anime with a lot of psychological drama in it. You can complete this anime in one night as it has only 12 episodes with 24 minutes approximately.

If you love ice-skating with incredible animation and some rom-com plot, then Yuri on Ice is best for you. It is one of the best anime by the MAPPA studio and is also available on Netflix.

Many Otakus are fond of Yaoi anime, and Yuri on Ice has no girls in the drama. However, its primary genre is sports rather than romance. Yuuri, the protagonist, has decided to quit his ice-skating journey after being defeated in the Grand Prix Finale. However, his passion arises when five-time world champion Victor Nikiforov suddenly appears at his home and asks for mentorship.

Seinen lovers, at the 4th position, we have placed Dorohedoro anime with 12 episodes. Only Netflix has the license to stream this anime produced by the MAPPA studio. It’s the best complete anime with action, comedy, fantasy, horror, and other genres.

Dorohedoro is a story of a lizard man, Kaiman, who hunts magic users with his trusted pair, Nikaidou. The lizard skin grants him resistance against any magic. In the realm, where Both Kaiman and Nikaidou have to survive in the dark realm where the superior ones crush the weak.

Zankyou no Terror, aka Terror in Resonance, is a mystery psychological anime with a lot of suspense. If you want to get rid of action, comedy, romance, and want some thriller anime, then Terror in Resonance is best for you. Also, the MAPPA studio has shaped its animation on another level. Specifically, it is one of the best MAPPA Anime on Netflix.

The plot resembles the mind game between the detective and the terrorists. The state police appointed detective Kenjirou Shibazaki to investigate the “Sphinx,” who challenged and threatened them after destroying the nuclear facility in Japan.

Shingeki no Kyojin, the voguish anime of this year, has been well-liked by the people since its manga adaptation is about to end. Another clandestine behind the exponential rise is its Season 4 Part 1, which was produced by the MAPPA Studio. The previous seasons were also fascinating ones formed under the Wit Studio.

Shingeki no Kyojin is an action Shounen anime with a great opening and background themes. I personally loved this anime because of its plot. Eren Yeager, the protagonist of the series, has lost his mother, friends, and childhood against the Humanoid creatures, known as Titans. To seek his revenge, he joins the vicious war against them.

Jujutsu Kaisen, MAPPA’s greatest achievement, is the most liked anime in terms of animation all over the world. The cheeriest part is Jujutsu Kaisen Season 1 is available on Netflix and can be accessible for the maximum of the countries. In other words, you can watch JJK in high quality with the best animation.

Jujutsu Kaisen has a unique plot where side characters are most renowned than the protagonist. I highly recommend you to add this in your binge-watch list if you want some breath-taking action scenes. The series has already unveiled the two most powerful characters in the first episode, i.e., Satoru Gojo and Ryomen Sukuna. And all we are eagerly anticipating for the god fight between the Strongest Sorcerer, Gojo, and the King of Curses, Sukuna.

These are all the best MAPPA anime with Netflix availability. Primarily, check whether these anime are available in your country before adding them in your binge-list. We will be back with another ranking list on outstanding anime. Till then, stay healthy and read the other posts below.