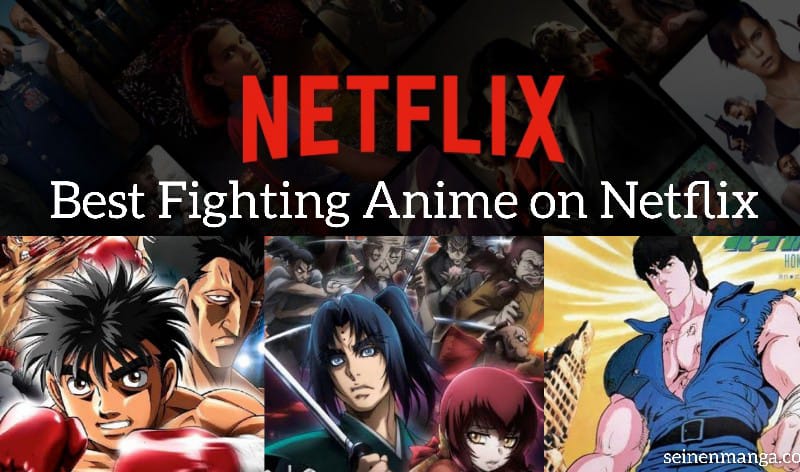 Anime is a Japanese animation style, which has grown popular due to its unique approach to storytelling. It has numerous genres. Hence, in this article, we will discuss the Top 15 best Fighting Anime on Netflix with Different Martial Arts. Before proceeding, let’s discuss the difference between action anime and pure fighting anime. And why is this post different from others?

Action genre means the character is thrust into a series of events that includes ferocity, extended fighting, rescues, and chases. In contrast, the pure fighting genre means the combat between fighters utilizing any martial arts or sports. Therefore, in this post, we have covered the best fighting anime to witness different fighting styles. So, without any further ado, let’s proceed.

Another tremendous historical fighting anime on Netflix is Vinland Saga. Currently, it has only 24 episodes with fantastic animation and plot. Vinland Saga displays the history story of when there is a war between England and the Danes.

As the conflict grows every passing year, there is chaos everywhere among the Vikings mercenary. Among this bedlam, Thorfinn, a boy, seeks revenge from Askeladd, who assassinated his father, Thors.

Samurai Champloo is a historical samurai anime with action, comedy, and adventure. It is one of the best swords fighting anime on Netflix. It has a total of 26 episodes.

The story begins when Fuu, a beautiful waitress, accidentally spills a drink on her customer. The customer, with his group, starts irritating her. She calls Mugen, a samurai who uses modern swords style, for help.

He defeats everyone there and mistakenly decides to pick a fight with the unwilling ronin Jin. He uses traditional swords fighting style, and they both accidentally eliminate the local magistrate’s son. Now Fuu, Mugen, and Jin have to leave this place.

Levius is a mechanical boxing anime on Netflix with a total of 12 episodes. It is a good fighting anime with a decent plot. It is a story of the 19th century; after the war, the craze against “mechanical boxing” among the people has risen tremendously.

In this sport, people have to fight with their modified bodies. A young boy, Levius, who lost his father in the war and his mother is also in a coma, decides to join the tournament of mechanical boxing in which his uncle helps him to modify his body.

Basilisk is a historical martial arts anime on Netflix with a good fighting animation and a fantastic plot. The only drawback is, it is only available on Netflix in Japan, Belgium, and Swiss. Therefore, fans have to use VPN to enjoy this historical fighting anime.

During the late 16th century, in Japan’s Azuchi-Momoyama period, the two ninja clans Iga Tsubagakure and Kouga Manjidaniwere engaged in a battle for centuries.

With the interference of Hattori Hanzō, the war finally ended. However, after some decades, the contract between them was canceled, and they decided to send ten best ninjas from respective sides to enter a competition of survival.

Jojo’s Bizarre Adventure is the most popular anime series on this list. It is also the best fighting anime on Netflix with action, adventure, and supernatural genres. Currently, Netflix has four seasons with a total of 152 episodes.

He is invited to a “God of High School competition,” where the students of all martial arts styles, weapon experts, and many others participated to attain victory. And the prize is the fulfillment of any wish of the winner.

The comedy-fighting anime on Netflix is Yu Yu Hakusho: Ghost Files with demons and martial arts as its themes. It has 112 episodes available on Netflix in many countries, so you can easily binge-watch this series.

The anime series comprises supernatural events, a good plot, and incredible martial arts scenes. It is the story of 14 years old boy, Yuusuke Urameshi, who sacrificed his life to save a child.

Therefore, Koenma, heir to the throne of the spirit realm, offered him a task in exchange for his life. Now he has to eliminate all the evil presence on Earth as a Spirit Detective.

Hajime no Ippo is the best boxing anime on Netflix. If you are fond of boxing and want to learn it, then the Hajime no Ippo anime series is best for you. It has a total of 75 episodes with only Hong Kong Netflix availability.

It is worth watching fighting anime series. Makunouchi Ippo, a fisherman’s child, has been bullied his entire life by his classmates. One day, he is saved by Takamura Mamoru, a professional boxer who brings him to his gym.

He notices Ippo’s wrist size, and body structure is too hard, and he forces him to punch a punching bag. Takamura witnesses that Ippo has raw strength too. So, he decides to change Ippo’s life.

This year, Yasuke has become the most popular samurai anime by MAPPA production. It is a historical samurai anime with street fighting available on Netflix.

It has only six episodes till now and can be easily accessible. The plot revolves around the first African Samurai, Yasuke, who got crushed by the warring daimyo, and the greatest ronin. Therefore, to get revenge for his village, he decides to become the greatest samurai ever.

Hinomaru Sumo is one of the best wrestling anime on Netflix. It has 24 episodes and is only available on Netflix Japan. If you like sumo wrestling, then you should give it a try.

Ranma ½ is a comedy martial arts anime on Netflix with a slice of life in it. Currently, only two seasons are available only on Netflix Japan. It means fans have to use VPN to watch this series.

The plot revolves around a top-class martial arts prodigy, Ranma Saotome. One day he accidentally falls into a cursed spring which results in the change of Ranma’s gender when he comes in contact with cold water. However, he can turn back by splashing hot water.

For the martial arts theme, Fist of the North Star is one of the best anime series. It has a great plot with many hand-to-hand combats; that’s why I’ve ranked it at 6th position in the list of the best Netflix fighting anime. However, it may be only available on Netflix Italy.

The story revolves around a brave-hearted warrior Kenshirou who was betrayed by his friend and left alone in a post-apocalyptic wasteland. In the harsh scenario, he has to survive and take revenge on his rival Shin, who has also captured Kenshirou’s fiancée Yuria.

He is only reliable on his Hokuto Shinken, an ancient martial art that he used to take down opponents.

Street Fighter II V is one of the best Netflix Fighting Anime available in the USA. The anime is full of martial arts action. It comprises the adventure of two young martial artists Ryu and Ken, who embark on a journey after being overwhelmed by Guile.

In the desire to become stronger, they meet other street fighters worldwide, from Chun-Li to Dhalsim. Their expedition offers some value when they have to defeat the antagonist of the anime, M. Bison. Street Fighter II V exhibits pure martial arts with different fighting styles of numerous regions.

Kengan Ashura is one of the most popular Netflix anime with the best martial arts fighting scenes. It also provides deep knowledge on the different types of original martial arts used in various regions since ancient times.

Here I recommend you to follow its manga series for a better plot. Presently only two seasons with 24 episodes are available on Netflix.

The story revolves around the Kengan Association Tournament, an underground fighting contest where the world’s best fighters of different sports participate to win this underground tournament.

Baki Series is the best anime if you are fond of martial arts with different fighting styles. It is one of the best anime series to learn hand-to-hand combats or street fighting.

Currently, its three seasons are easily accessible in any country; however, the fourth one has limited access. Baki Hanma is a wealthy child who has been training traditional martial arts since childhood to become powerful like his father, Yujiro Hanma, the strongest creature in the world.

After defeating powerful fighters one day, he challenged his father and was severely crushed by him. After this incident, he embarks on a journey all around the world to learn different styles.

Here we conclude our list of Top 15 Best Fighting Anime on Netflix with Different Styles. We have also mentioned the countries’ availability based on regions. Hence, you can use VPN to access the particular countries’ Netflix to watch your favorite anime. We will be back with another ranking list. Till then, stay tuned with us and read the articles below.