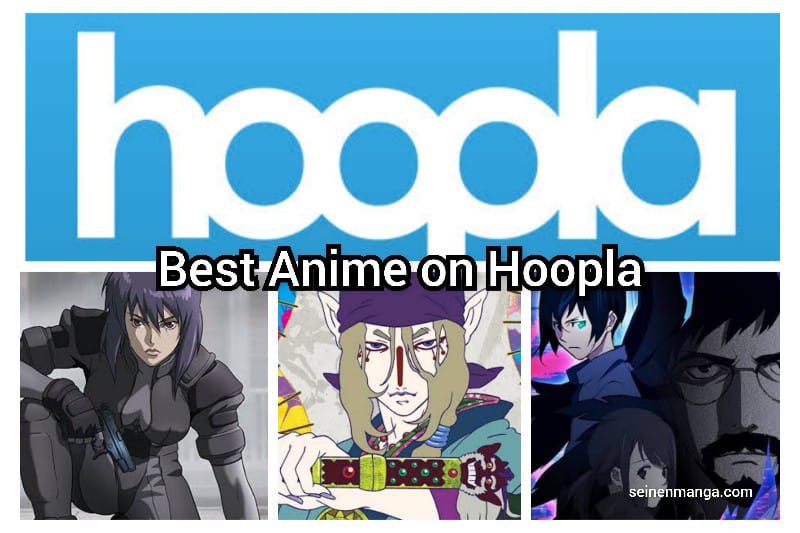 The world is changing, and now people prefer the Japanese animation series over other T.V. shows for entertainment. The world-famous streaming sites like Netflix, HBO Max, Prime Video, etc., have their own anime collection/library. Consequently, the other popular platforms like Peacock T.V., Hoopla are also initiating to configure their particular collection of the best anime series and movies.

In this post, we have ranked the Top 10 Best Anime on Hoopla. Not only this, but we have also provided the list of all the anime that are available on it. It delivers fans more choices, from advancing to adding new movies and series to their bucket list. Habitually, this list is also ranked by the IMDb score. So, let’s begin.

The great romance story with a lifesaving adventure is The Princess and the Pilot. During the war between the Levamme Empire and the Amatsukami Imperium, an exceptional pilot Charles is appointed to save the princess Juana del Moral from the Amatsukami Imperium. He is on the mission to safely fly Juana del Moral across the enemy territory to the Levamme Empire for the prince.

Lupin the Third is a great anime movie with adventure and mystery. The best thief, Arsène Lupin III, once robbed a casino with his colleague, Daisuke Jigen. Later on, he discovered that all the bills were high-quality counterfeits. Therefore, he decided to find out the source and went on an adventure with his colleague. He reached the small nation of Cagliostro, where he saved princess Clarisse d’ Cagliostro from the thugs. After seeing the beautiful princess, he seeks to remedy the situation.

The story follows in the land of Cremona, where due to advanced technology and the hustle environment, lawbreaking is increasing day by day. However, among all the breakers, the terrifying one is “Killer B.” He has superhuman abilities through which has put the city in the mayhem. To investigate and stop crimes, Keith Flick, the best detective, is appointed by the Royal Investigation Services along with his sidekick, Lily Hoshina. So, how will Keith counter the breakers with superhuman abilities?

“In this Corner of the World” anime movie illustrates the struggle of the ordinary people during World War 2. Suzu Urano, a kind-hearted girl who recently shifted to her husband’s house after the marriage. However, the war is going on in the nearby places, and things get worse when the flames of the war reach her own backyard. Now, her fight is to continue living and save her family.

The futuristic story of the underground fights where fighters can modify their limbs with the mechanical parts to enhance speed, power, and reflexes. This new sport is called the Megalobox. One night, a recognized underground Megalobox fighter, Junk Dog, accidentally crashed Yukiko Shirato, the CEO of the Shirato Group. Junk Dog challenged her bodyguard Yūri, a Megalobox champion, for a duel. But Yuri advised him to join the Megaloboxing tournament in order to fight with him.

Inazuma Eleven is one of my favorite anime series during my childhood days. It’s a soccer anime with superpowers. The plot starts with the struggle of the team Inazuma Eleven which is on the verge of being disbanded. The only way to avoid the disbandment is to defeat the Teikoku Gakuen, the best team in Japan. Mamoru Endou, the team captain, takes the challenge to change the club back into shape.

Mononoke has an interesting supernatural plot with a lot of mysteries. It’s a horror anime where a nameless man, known only as of the “Medicine Seller,” wanders everywhere in search of Mononoke. The Mononoke are the unnatural spirits that appear on the surface of the water bodies and living in the human world. They bind themselves with negative emotions. Medicine Seller is on the journey to exorcise Mononoke, but without the knowledge of spirit’s form, truth, and reason, he cannot eliminate them.

Jojo’s Bizarre Adventure is also one of the best action anime available on Hoopla. If you want some action, adventure, along supernatural abilities, then this anime series is best for you. It has an exciting plot that revolves around the Joestar Family, which began half a century ago. Dario Brando saved the life of George Joestar by sacrificing himself. George decided to repay him by adopting his son, Dio. And from here, the story commences when Dio finds out the Aztec stone mask with supernatural properties and desires to destroy the Joestar Family.

Ghost in the Shell: Stand Alone Complex has the story of the future where humans can fully transplant their body parts with mechanical components to acquire a boost in physical prowess. However, this advanced technology can be used by the bad people too in society. Therefore to avoid this, Section 9, the independent police force led by Daisuke Aramaki and Motoko Kusanagi, works secretly. But things get upside down when they are on the mission to catch a great hacker named “The Laughing Man.“

One Piece is one of the best anime series worldwide based on plot. Every anime fan knows about this series. It is a complete anime with action, adventure, comedy, drama, fantasy, horror, and many more. The story revolves around a boy, Monkey D. Luffy, who wants to become the next Pirate King by finding the One Piece (treasure left by the previous Pirate King somewhere in Grand Blue). With this dream, he moves into the sea, searching for new crewmates to form his own pirate group, Straw Hat Pirates. However, he is unaware that he has to overcome the monstrous pirates all around the world to become the Pirate King.

Here we conclude our list of Best Anime on Hoopla. Fans can watch anime on Hoopla with registration and subscription. Hoopla is currently popular only in the USA. Hence, we recommend the fans advance for the different platforms like Hulu, Prime Video to access the anime at a low cost. We will be back with another list. Till then, stay healthy; stay tuned.