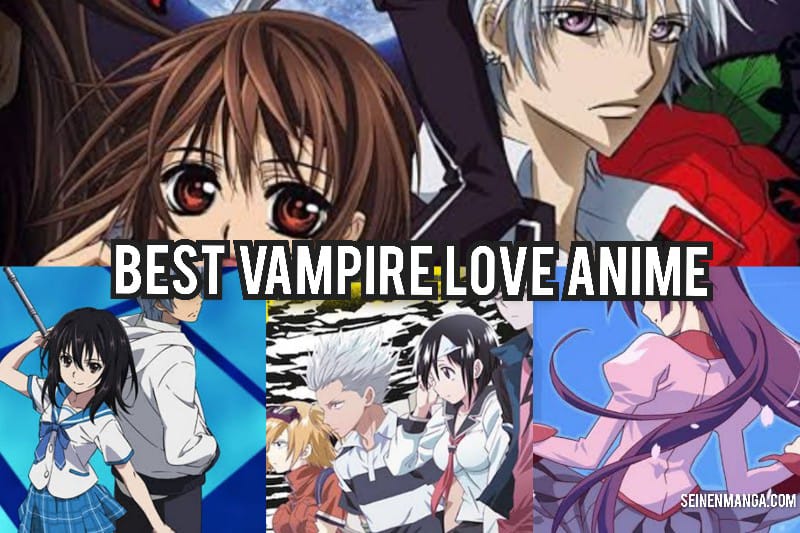 Vampire anime has been in demand since the nineteenth century. First, people begin to love vampire novels and manga, but now they like to watch vampire anime series and movies. Among the vampire anime, there is a sub-genre, i.e., Vampire Romance or Vampire Love anime which is currently most-liked. Vampire romance anime deals with the old-school idea that vampires are romantic creatures that go to any extent for their loved ones. Therefore, here we have ranked 9 Best Vampire Love Anime on Netflix | Hulu 2022 with Watch Source.

All the anime with vampire romance in the list are either available on Netflix or Hulu. For the US fans, they can begin their binge-watch on Hulu. However, for the rest of the world, they can use VPN to access their favorite. So, without any further delay, let’s begin.

Diabolik Lovers has an interesting vampire love story plot. A 17 years old girl, Yui Komori, was sent by her father to a mansion where six Sakamaki brothers, Shuu, Reiji, Ayato, Kanato, Laito, and Subaru, live. Now she has to live in this mansion as her new home. However, these brothers are the vampire family, and they soon realize that Yui is a new “sacrificial bride,” for them, but only one can choose her. Every brother vow to make her own, and the romantic madness around Yui begins.

Dance with Devil is one of the great romance anime full of vampires. The life of an ordinary schoolgirl, Ritsuka Tachibana, is turned upside down when her mother gets kidnapped, and she is dragged into a world of vampires and devils. Both vampires and devils are in search of Grimoire, which allows them to rule this realm. In this world full of secrets, Ritsuka has to decide whom she can trust while handsome and dangerous members of the student council compete to make her fall for them.

Rosario + Vampire anime comprises a lot of action and vampire romance. Also, the series has one of the most beautiful female vampire characters. A human boy, Tsukune Aono, accidentally ends up in Youkai Academy for higher studies because of his bad grades. But soon realizes that this Academy is primarily for the monsters who learn to coexist with humans. Also, there is a rule in the academy if a human is found in the school, they will be eliminated immediately. By risking his life, Tsukune decided to study in this academy only for Moka Akashiya, the most beautiful girl. But later on, he discovered that Moka is also not a human but a vampire.

Devils’ Line is a Seinen vampire romance anime available on both Hulu and Netflix. It displays a pure love story between a human girl and a vampire boy. It is a story of a 22-year-old, Tsukasa Taira, who falls in love with her long-time friend Yuuki Anzai, a hybrid vampire. After knowing the truth, she stills love him. However, due to emotional imbalance and unwanted incidents, a part of Anzai desires to devour her.

If you want some mystery along with some best vampire romance, then Vampire Knight is best for you. The secret between day and night class at the Cross Academy unveiled that the gorgeous students of the night class are vampires. A beautiful girl, Yuuki Cross, is a daughter of Cross Academy’s headmaster is appointed as a member of the disciplinary committee along with Zero Kiryuu, who has a grudge against the vampires. However, things get complicated when Yuuki develops feelings for Kaname Kuran, a pureblood vampire and the leader of the Night Class.

Strike The Blood anime series began when an ordinary boy, Kojou Akatsuki, discovered that he has the remarkable abilities of a vampire. He is also chosen for the fourth primogenitor. He is considered to be as powerful as the legendary vampire. Now the Demon District of Itogami Island is in chaos. A girl, Yukina Himeragi, an apprentice sword-shaman of the Lion King Organization, is appointed to monitor him. But the twist is, instead of monitoring, she falls in love with him.

Blood Lad is a story of a powerful vampire who is in love with a human girl. It comprises an action-comedy with a vampire romance. In the Eastern District of the Demonic World, a ruthless vampire monster named Staz Charlie Blood. However, in reality, he is an Otaku who loves spending time reading manga, watching anime, and playing games. His only desire is to live with a Japanese girl. One day, a beautiful girl, Fuyumi Yanagi, accidentally enters the demonic world; however, she meets a terrible fate and dies. Now she is wandering as a ghost. After knowing all this, Staz vowed to resurrect her at any cost.

The Case of Vanitas is a historical vampire anime available on Hulu. It is not a particular romance anime; however, I put it on the list because of its unique plot. It is the story of the hatred between the two groups of vampires, the Vampire of the Blue Moon, hated by the Vampires of the Red Moon. One night, a vampire, Noé Archiviste, was saved by Vanitas, a doctor who heals vampires from Malnomen. It is a disease that makes vampires insane. Vanitas uses the power of The Book of Vanitas, which is created by his master, a Blue Moon Vampire. Now both Noe and Vanitas are on the journey to cure every vampire.

The best vampire romance anime is Bakemonogatari. It is a story of a boy, Koyomi Araragi, who has enhanced vision, super healing, and other abilities because he managed to survive vampirism. Now try to live an everyday life; one day, he encounters her classmate Hitagi Senjougahara and realizes that she is weightless. This develops his curiosity towards her. Later on, he realizes that he is the only one who has supernatural problems.

Jitsu wa Watashi wa or Actually, I Am is also one of the great vampire love anime. I’ve mentioned it in the special mention because of its availability. It is not available on Hulu or Netflix. It has a romantic-comedy plot. Asahi Kuromine, a high school boy who is terrible at keeping secrets, discovers that his classmate Youko is a vampire. Now the secret is difficult to maintain from the other students. Later on, he finds that even half of the population of the school is non-human. And he has to keep everyone’s secret from the other students.

This accomplishes our list of Best Vampire Romance anime on Netflix | Hulu 2022 with Watch Source. Fans can also access these platforms by using VPN for different countries. We will back with another ranking post. Till then, stay safe and read our other articles below.