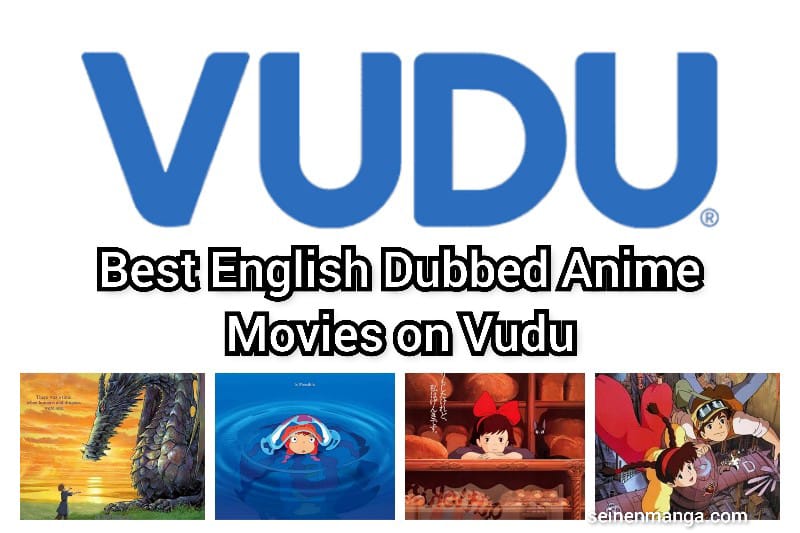 The Japanese animation comprises TV shows, series, movies, and OVAs. Last year, a Japanese animated movie, Demon Slayer: The Mugen Train, broke many records worldwide and became the first non-Hollywood highest-grossing film in the annual box office with a total collection of more than $503 million. This demonstrates that anime movies are also popular among the Otakus. Therefore, in this post, we will cover the Top 10+ Best Anime movies on Vudu, which are dubbed in English.

The post will only comprise Studio Ghibli’s production available on Vudu so that fans don’t need to worry about the connection of the movies with the anime series (like in OVAs). All the listed movies are independent with different stories. Studio Ghibli’s anime movies are the most popular because of their beautiful themes, incredible character designs, and a great plot. These movies are available on Vudu in English dubbed. It means all you need to do is buy or rent it and continue watching.

Tales from Earthsea has a fantasy adventure plot where the calamities begin when the black dragon slew the white dragon. Sparrowhawk, a powerful Archmage, sets on a journey to unearth the truth behind these mysteries. In his journey, he meets Prince Arren, the only heir of the Kingdom of Enlad, who is wandering aimlessly. They both tag along and begin their journey to solve the imaginary puzzles of secrecy.

From Up on Poppy Hill is a romance Studio Ghibli movie. It shows a love story between a young girl, Umi Matsuzaki, and a boy, Shun Kazama, both are studying in the same school. However, Shun Kazama is an orphan, so they both decide to discover his past. But soon realize that they may have a lot more in common in the family.

“When Marnie was There” is a psychological, emotional drama with a mystery. The story revolves around Anna, a young girl who is suffering from asthma. Her doctor recommended moving to the countryside for the fresh air. She moved to her uncle and aunt and livings her days peacefully. One day, she met Marine, a young girl who is living alone in the abandoned Marsh House. They become friends; however, Anna is still unaware of Marnie’s truth.

Ponyo is Hayao Miyazaki’s 8th film, grossing over $201 million worldwide. Ponyo has the best animation. It has a beautiful plot where a goldfish named Ponyo is stuck into the glass jar. After being rescued by a 5-years-old boy, Sousuke, she decided to live on the land along with humans. She grew arms and legs and advanced to live on the land. However, she is a native of underwater species. So, the energy released by her cause’s an imbalance in nature so, how Ponyo will save his friend.

Kiki’s Delivery Service is an adventure fantasy drama where a young girl, Kiki, has to live in a distant town on her own to become a full-fledged witch as per the tradition. Taking her cat, Jiji, she flies in a modern town where she finds difficulty in living. So, how will she manage to earn and live in a new town?

Castle in the Sky is a romance sci-fi anime movie on Vudu from the Studio Ghibli production. In the modern world where the planes and flying ships are most common among government agents and pirates. The story is plotted when a girl named Sheeta escaped from the government airship during the attack of a Pirate ship and met a boy, Pazu. Pazu is on a journey to find the castle in the sky. So, Sheeta joins him for her new adventure.

Nausicaä of the Valley of the Wind is only movie in the list with the Topcraft studio. It an action fantasy movie. The story begins 1000 years after the catastrophic nuclear war where the remnants of human beings are surviving against the toxic jungle and enormous insects. A far away somewhere in the middle of the Ocean, there is a peaceful farming kingdom known as the “Valley of the Wind,” which is still unaffected by the war and the jungle. However, things get change when an unwanted spaceship of the Tolmekian military crashes in the kingdom. So, how Nausicaä, the princess will save her kingdom?

My Neighbor Totoro is a supernatural adventure film by Studio Ghibli and Walt Disney. To take care of their mother, Satsuki, and Mei, two small girls, shift to the countryside along with their father. One day, Mei meets a small, bunny-like creature in the yard, and after following it, she discovers magical creatures. After unveiling this to Satsuki, they both begin to carry out an adventure journey with these magical forest creatures.

Howl’s Moving Castle is my favorite Studio Ghibli movie. The movie has mind-blowing background music, characters design, and plot. The story begins when a vengeful Witch of the Waste cursed and turned a sweet beautiful, Sophie into an older woman. Now to turn back into the normal, she wanders along with a moving scarecrow, Turnip Head, searching for Howl, a great wizard. Later on, she encounters his moving castle, also known as the Howl’s Moving Castle. So, will she meet Howl, or she has to carry his journey a little longer?

Princess Mononoke is based on today’s reality, where there is a war going on between humans and nature. To gain advanced technology, humans are promoting deforestation resulting in the extinction of the wildlife. Princess San and the sacred spirits of the forest revolt against humanity which leads to a war between the two kinds. So, how a prince named Ashitaka, who is cursed to become a divine wolf, shows the path of harmony to them.

Spirited Away is the best movie with a total sales of more than $289 million worldwide. It won the “Oscar” for Best Animated Feature in 2003. The story revolves around a 10-year-old girl, Chihiro Ogino, who accidentally stuck into an abandoned place also called the Spirit World. Now after the dusk falls, the wanders around the place. Now she has to work and live amongst spirits.

Here, we conclude our list of Top 10+ Best English Dubbed Anime Movies on Vudu. Fans can access, buy or rent the popular anime available on Vudu. We will be back with another post. Till then, stay tuned with us and read the articles below.