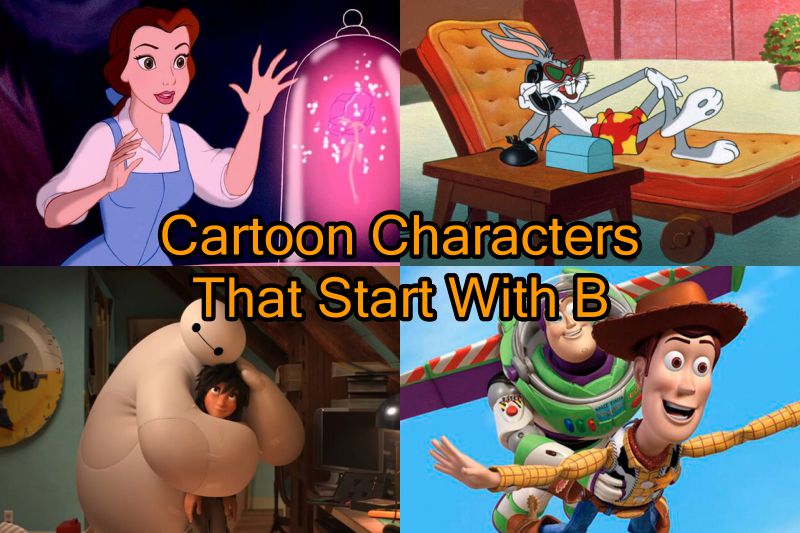 Cartoons and animated media have undergone drastic changes since their initial popularity. However, the characters in these shows are still loved by many.

Cartoon Characters That Start With B

Bugs Bunny of the Looney Tunes series is an American cultural icon.

He’s a grey hare known for his relaxed and passive behavior. He has always seen in his signature white gloves and sometimes removes one to hit his opponents.

Additionally, he has a charismatic trickster and a master of disguise. When provoked, he easily outsmarts all his enemies.

Bugs Bunny’s popularity also leads to a sustained rivalry with Daffy Duck, who’s jealous of his fame. With time, they become friendlier and even acknowledge each other as best friends.

Beauty and the Beast, Disney’s 30th animated feature film, is a classic.

Belle’s known for her beauty as well as her love for books. She’s confident and outspoken, especially when she has to reject Gaston’s unwanted advances!

She is treated like an outcast due to her ‘unladylike’ behavior and cannot seem to fit in. She longs for an adventure that will take her out of her small village – just like in her books.

Through her kindness, vast imagination, and open mind, she befriends the Beast and the castle servants and gets her happily ever after!

Bambi is the main protagonist of Bambi, one of Disney’s earliest animated films. An adorable bundle of joy and endless curiosity, Bambi is a small deer who lives a happy and carefree life with his mother.

Due to her sudden death, Bambi is left alone with an absent father, whose approval he’s constantly seeking for.

However, with two of his closest friends, a small white rabbit named Thumper and a shy skunk named Flower, he grows up to be a mature buck, one befitting the title of the son of the Great Prince of the Forest.

Disney-Pixar’s Toy Story franchise is a classic watch. Buzz Lightyear is a typical space ranger: cool, brave, and adventurous. He has wings that he uses to fly and a glow-in-the-dark feature too.

When Andy first got Buzz, he was enamored by him. which made all the other toys jealous, especially Woody.

Buzz, however, seemed to believe that he was a member of the elite Universe Protection Unit of the Space Ranger Corps and had to protect the galaxy from the evil Emperor Zurg.

After discovering the truth, he’s devastated but finds a new life with Andy, Woody, and the rest of the toys.

Bagheera is the tritagonist of Disney’s The Jungle Book. He’s the guardian of the man-cub, i.e., Mowgli. Being wise, intelligent, and level-headed, he managed to rescue Mowgli. After leaving Mowgli to be raised by the wolves, he occasionally visits and checks up on him.

Following Mowgli’s encounter with the Bengal tiger, Sher Khan, Bagheera accompanies him to the Man Village.

The slender, black panther can be short-tempered at times and is often seen disagreeing with his companion, Baloo, the bear. Together, they manage to defeat Sher Khan and send Mowgli off to the village.

Baloo is one of the main protagonists of Disney’s The Jungle Book. He’s a fun-loving and easy-going sloth bear, as suggested by the song he’s always singing, The Bare Necessities. He’s the life of the party and loves to dance and sing to the beats of the jungle.

He doesn’t like the burden of responsibility. Consequently, Bagheera calls him a bona fide jungle bum. All things considered, he would never abandon his morals or refuse to help. He tags along with Mowgli on his journey and further risks his life to save him from Sher Khan.

Known for his adorable character design, Baymax is a big, round, inflatable robot whose purpose is to serve as a personal healthcare companion. He was created by Tadashi Hamada, and after his death, Baymax began to care for his brother, Hiro Hamada.

Baymax joins the superhero group ‘Big Hero 6’ as a means to treat Hiro. Although, in the beginning, he appeared as if he was lacking in emotion, spending time with Hiro changed him for the better.

Further, he began to develop a personality of his own and was able to form a true connection with Hiro and his friends!

Bolt, a white German Shephard, is the protagonist of Disney’s 2008 animated film, Bolt.

He’s an energetic and lively dog. As the star of a live-action series with his owner, Penny, Bolt believes that he’s a superdog!

When he gets separated from Penny, Bolt remains headstrong and is persistent in his quest to return home.

His hero-like one-liners and delusional beliefs about the animals around him are incredibly funny. Despite the truth of his nature shocking him to his core, he’s able to adapt quickly. He’s loyal to his friends and, through his journey, learns to live and play like all dogs.

Disney-Pixar’s Monsters, Inc. features one of the cutest toddlers in animation history. 2-year-old Boo is a curious and naïve human girl in the world of Monsters, Inc. She’s a small girl with brown eyes, brown hair in pigtails, and small stature.

She is too young to speak in proper sentences and mostly talks in gibberish with the occasional ‘Boo!’ and ‘Mike Wazowski!’ in between. Her entry into the Monsters Universe causes a lot of problems for Sully and Mike, who do their best to help her return home.

One of the major characters in Phineas and Ferb is Baljeet “Jeet” Tjinder – the certified nerd of the group. In typical fashion, he’s shy and timid, is very good at math, and gets excellent grades. His biggest fear is getting an F on a math test.

He has a friendly relationship with Phineas and Ferb and often ends up inspiring some of their creations as he’s asking for advice. He often gets bullied by Budford. Over time, they become frenemies and act friendly with each other.

Animation studios of the past and present consistently put out cartoons, movies, and TV series. This article features the top 10 cartoon characters that start with B. These characters have managed to enamor their audience years after their prime. Such is the legacy of their characters!