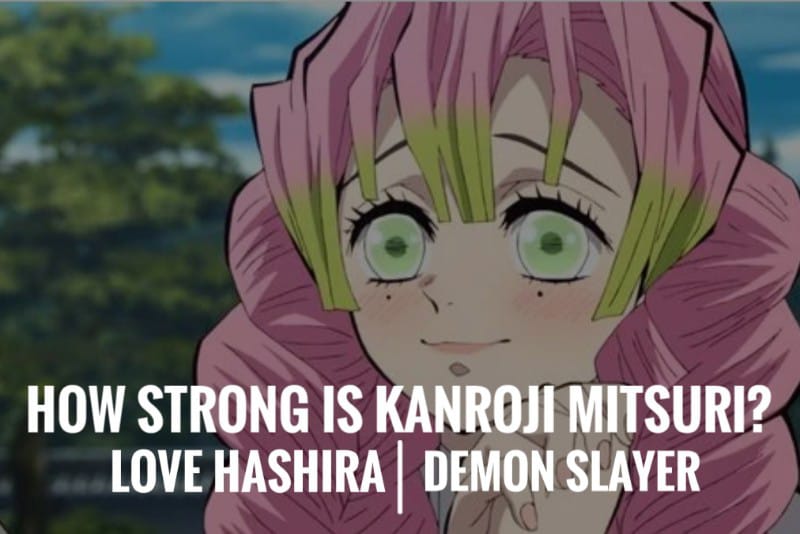 With season 3 of Koyoharu Gotoge’s Kimetsu No Yaiba, a.k.a Demon Slayer, set for release next year in April 2023, we’ve been introduced to all current Hashiras during Unwavering Resolve Arc.

Also, the manga, with a total of 205 chapters, ended in May 2020. Fans were quite curious about a unique Hashira with a unique Breathing Technique, the Love Hashira- Kanroji Mitsuri, and wondered just how strong is Mitsuri?

Kanroji Mitsuri is one of the strongest Hashiras in terms of raw strength and flexibility. She was trained by Rengoku Kyojuro, the Flame Hashira, as his Tsuguko. She mastered Love Breathing, which she derived from Flame Breathing, to suit her the best. Her technique is even faster than Sound Hashira, Tengen Uzui.

Hence, we’ll be discussing her strength, abilities, breathing technique, and weaknesses in detail.

How strong is Kanroji Mitsuri in Demon Slayer?

Kanroji Mitsuri is the Love Hashira because she derived Love Breathing from Flame Breathing, and hence, she’s the only one who mastered it. The same goes for her unique, thin, and whip-like Nichirin Katana.

She also awakened her Demon Slayer mark during her battle against Upper-Rank Four, Hantengu’s clone, Zohakuten boosting her powers to be on par with him. 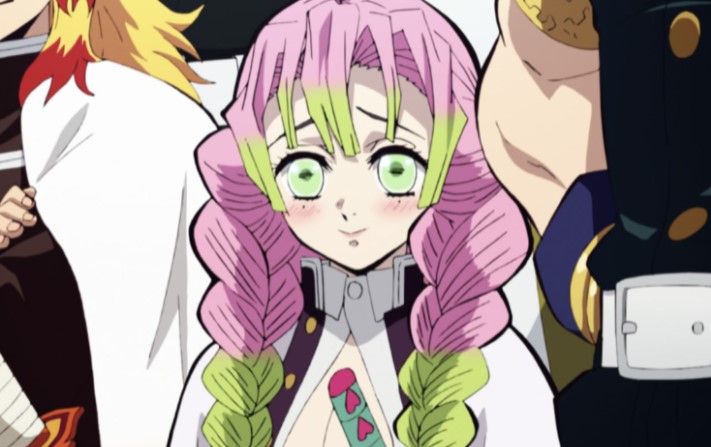 Her breathing technique is powerful but is not as exceptional and lethal. She loses when it comes to agility and battle strategies.

Mitsuri is a master of the Love Breathing technique derived from Flame Breathing. She uses a total of six forms of Love Breathing utilizing the full potential of her super-human strength and flexibility.

Her sword is a thin, soft, and whip-like Nichirin Katana that can cut through sound and lightening, unlike regular Katana.

Her sword is so uniquely shaped that nobody else can wield it. She’s an incredibly fast swordswoman who can land multiple attacks on her opponents before they can even react. 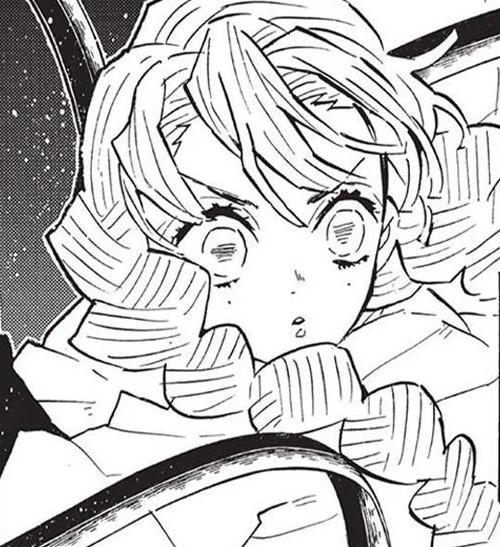 Mitsuri being the 5th strongest Hashira, is definitely very skilled and powerful. She became a Hashira just after six months of training.

Due to her muscle composition being 8 times denser than that of an average human being, she possesses an incredible amount of strength right since childhood. When she was 13 months old, she could lift a huge rock weighing 15 kg!

Her strength was best displayed when she fought against Nakime, Upper rank four of Twelve Kizuki, and was able to rip off Kibutsuji Muzan’s arms whip with her bare hands during the final battle.

Alongside her extreme strength, she’s also incredibly flexible. Thanks to this, she can fully utilize her Love Breathing and flexible Nichirin sword without cutting herself.

The combined flexibility of her sword and herself helps her perform a wide range of techniques and attacks. Her flexibility also allows her to land long-ranged attacks on her opponents before they even see it coming.

Despite being the slowest runner, her attacks are faster than even Sound Hashira, Tengen Uzui. She lands swift attacks on her opponent before they can even react. 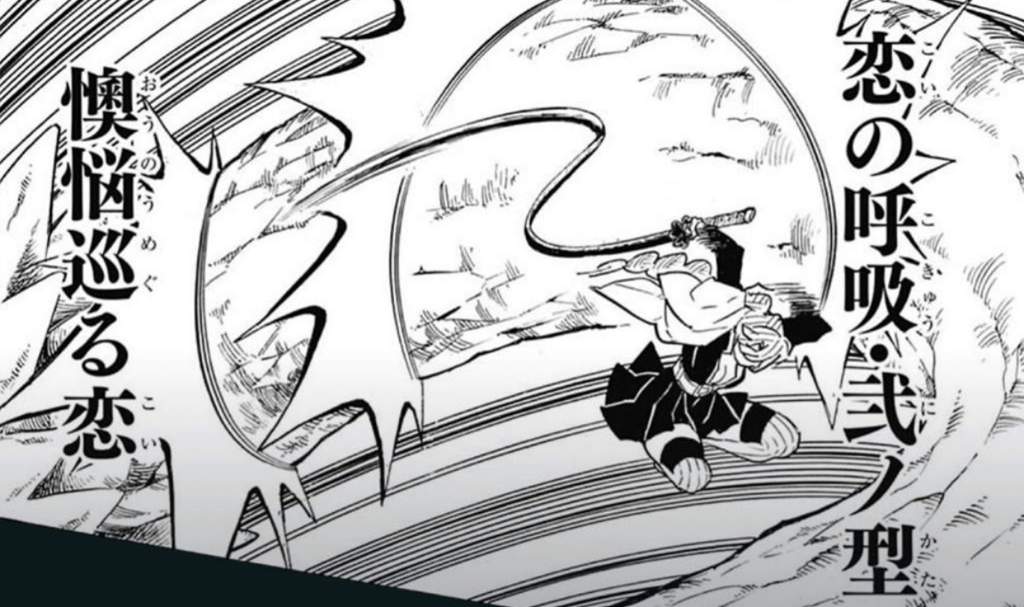 Her speed and reflexes were best displayed during Swordsmith Village arc when she eradicated Upper rank five, Gyokko’s minions before they even saw it coming, without breaking a sweat.

Later, during her battle against Zohakuten, she easily avoided all his attacks produced by his Blood Demon Art in the form of powerful lightning and sound waves.

Let’s not be fooled by her mellow appearance; she is a powerful individual. She was able to last the longest during her battle against Hantengu despite being heavily injured during Swordsmith Village Arc.

And also, during their battle against Kibutsuji Muzan, she had enough strength to rip his arm off even when she was exhausted and almost on her death bed.

She manifested her slayer mark during her fight against Zohakuten. Her slayer mark is a twin heart placed pointy end vertically with angel wings on either side.

This boosted her speed, precision, physical strength, and overall strength to an exceptional level. She was now on par with an Upper-rank demon and one of the top 5 at that!

The fact that any other demon couldn’t slay her throughout the series and only Kibutsuji Muzan, the demon king himself, was able to eradicate her should tell you how incredibly powerful Hashira she is!

Mitsuri vs Shinobu: Who would win?

Considering both their skills and power displayed throughout the manga, Mitsuri would definitely win against Shinobu. Mitsuri is a rare Hashira who can use two breathing styles – Flame and Love Breathing. While Shinobu only uses one breathing style- Insect Breathing. 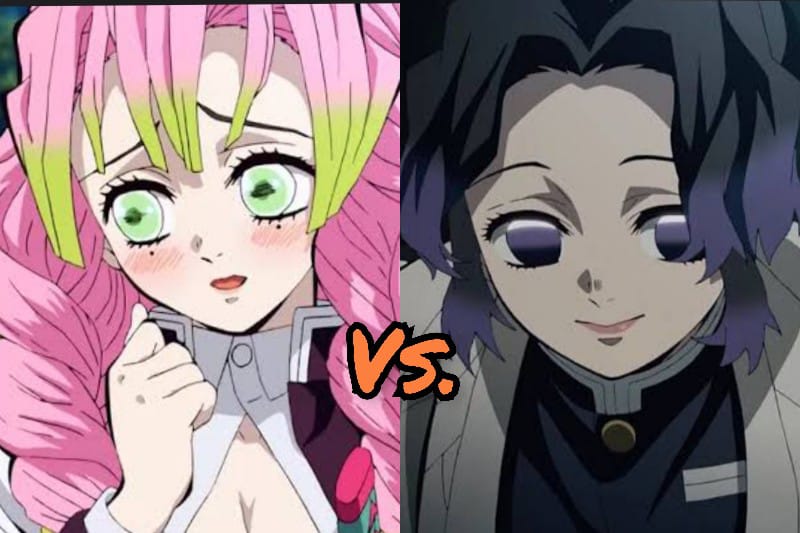 When we look at their fighting style, Mitsuri is a long-range slayer, thanks to her flexible sword. At the same time, Shinobu has to use Wisteria’s poison to make her attack lethal and hence is a short-range fighter. Shinobu lacks physical strength, flexibility, and a slayer mark! And therefore, would lose to Mitsuri.

Mitsuri, without a doubt, would win. Shinobu is considered to be the weakest Hashira in terms of physical strength. Mitsuri is already gifted with super-human strength and has mastered it, unlike Shinobu.

Mitsuri has shown incredible flexibility and speed. Shinobu lacks the flexibility but would defeat Mitsuri in speed and agility. Shinobu is slightly faster than Mitsuri and can quickly land multiple lethal cuts on her.

Because her sword is filled with Wisteria poison, she would defeat her even if she landed only one cut on Mitsuri.

Mitsuri’s Love Breathing combined with her flexibility and sweeping motion of attacks would over-power Shinobu’s Insect Breathing. It would be quite tricky for Shinobu to land an attack and poison Mitsuri since she would need to get close to her.

Shinobu’s needle-tipped sword also serves as a disadvantage in any combat. Love Breathing is the winner here.

To awaken the slayer mark, heart rate over 200 bpm and body temperature over 39° Celsius are required in the presence of an individual directly related to Sun Breathing.

Shinobu never got to fight alongside Kamado Tanjiro, unlike Mitsuri and neither does she have enough physical strength. Mitsuri was able to awaken her slayer mark and is the winner here.

Shinobu is incredibly knowledgeable and an excellent strategist. She could over-whelm even Upper rank two, Doma. She saved injured people during her battle against him without even being detected.

Shinobu also has knowledge of human anatomy, which helps her to precisely stab or cut her opponent where her poison would be most lethal. Shinobu is the clear winner here.

So to answer the question, Mitsuri vs. Shinobu: who would win? It’s Kanroji Mitsuri, overall. Both the Hashiras are very powerful, but Kocho Shinobu would fall short against Kanroji Mitsuri!

Where to read Demon Slayer Manga?

As the Demon Slayer manga ended in May 2020, many fans finally rushed to start reading it, especially anime-only watchers. Demon Slayer’s production studio, Ufotable, did an exceptional job setting new animation standards. This anime was able to sweep an overwhelming amount of fans and became representative of current-gen anime for non-watchers!

Must Read- Where can I watch Demon Slayer? | English 2022