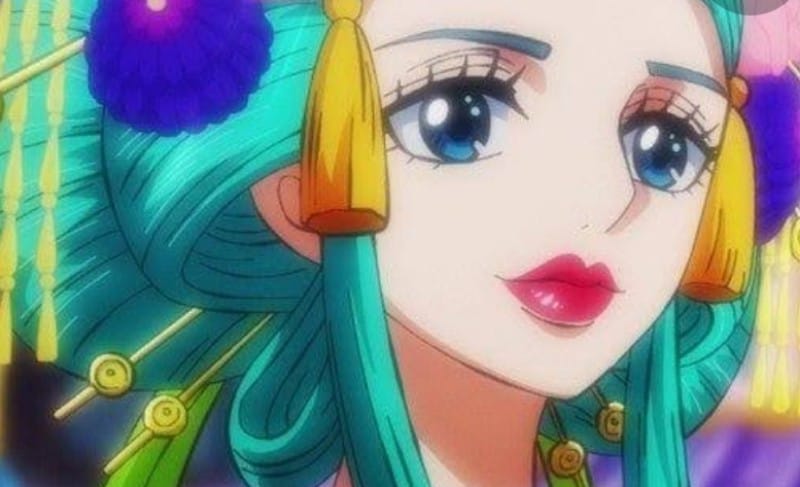 The Wano arc has become the greatest and most exciting arc in the One Piece series, releasing more than 140 chapters starting from Chapter 909 in 2018. Till now, we have seen many interesting and new characters in this arc. Today, we have come up with a new ranking list for “Top 10 Most Beautiful One Piece Wano Female characters.“

As stated in the title, we have listed the One Piece female characters who were either newly introduced or played a significant role in this arc. The list is ranked based on the popularity of the particular character in the various discussion hubs. So, without any further delay, let’s begin the list. 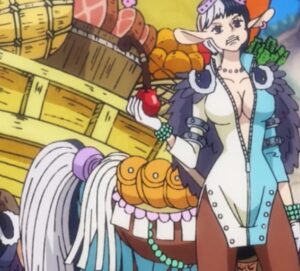 Speed was introduced as a member of the Beast Pirates. But later on, after eating Tama’s Dango, she became an ally to her. Due to the consequences of an artificial Zoan devil fruit, she has permanently transformed into a centaur.

If she had not eaten the artificial devil fruit, then no doubt, she would have been one of the hottest One Piece Female characters with purple eyes and white-black hairs. 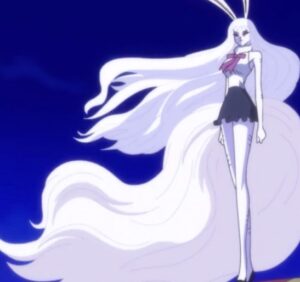 No doubt, Carrot is everyone’s favorite character with her sparkling nature. She is a very cute mink who looks like a human rabbit with beautiful white fur, brown hair, and brown eyes.

She is currently traveling with Straw Hat Pirates. Carrot played a significant role during the final battle on Onigashima by taking revenge from Perospero. In her Sulong form, she becomes one of the most beautiful female characters in the One Piece Wano arc. 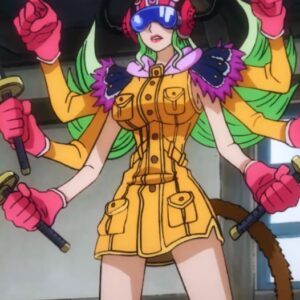 Solitaire was introduced in One Piece Chapter 935 as the vice warden of Prison Mine in the Udon. Like Speed, she is also a SMILE user with four extra arms and a monkey tail.

She is a skinny girl with fair-toned skin and beautiful light green mint hair. Even with the artificial Zoan fruit, she looks gorgeous. Therefore, if she had not eaten the SMILE fruit, then no doubt, she would have been one of the hottest One Piece Female characters. 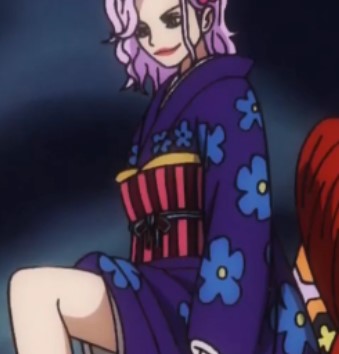 Sarahebi is another Gifter who works under Black Maria. She is one of the most beautiful One Piece Wano female characters with pale purple hair and a fair complex.

She ate a SMILE fruit model snake, and with the ability to stretch her neck, she frightened her students who disagreed with her false lecture. During the Wano battle, she helped Black Maria to trap Sanji. 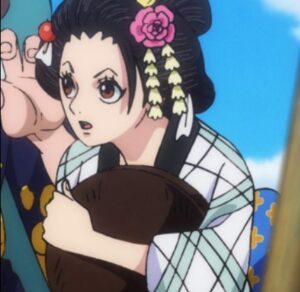 Tsurujo is Kinemon’s wife, and in her young adulthood, she was one of the most beautiful females in the Wano. Along with her beauty, she has a very kind and compassionate nature that attracts anyone.

With light brown eyes, black hair, and fair complex, she gains the ninth position in the “One Piece Wano Female Characters list.“ 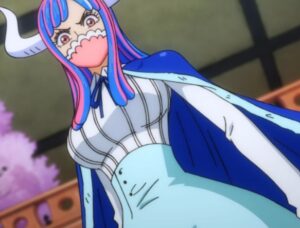 Ulti is a member of Flying Six and has the abilities of Dragon-Dragon Fruit, Pachycephalosaurus Model. She can transform into a human-pachycephalosaurus hybrid at will, in which she gains an increase in strength and Speed.

Along with power and abilities, she is also one of the hottest female characters in the Wano Arc. She is a tall young woman with beautiful pink-blue color hair and a fair complexion. 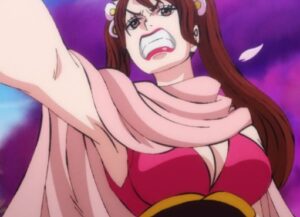 Here, we are taking Shinobu at her younger age. The series has already unveiled how captivating she looks in her late twenties.

No doubt, she is one of the most beautiful One Piece female characters in Wano. Twenty years ago, she was a tall slim girl with brown hair who wore a light-yellow scarf. 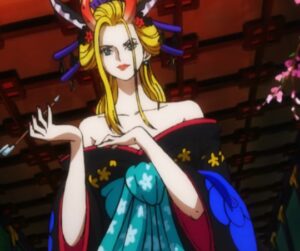 Another beautiful member of the Flying Six is Black Maria. She is a tall young woman with a height of 8.2 meters. Maria ate ancient Zoan fruit, Kumo Kumo no Mi, Model: Rosamygale Grauvogeli, allowing her to transform into a spider-hybrid form.

She is powerful enough to challenge All-Stars. In the battle, she was defeated by Robin. Black Maria is also a skilled musician with her beauty and strength, which makes her one of the hottest One Piece female characters in the Wano arc. 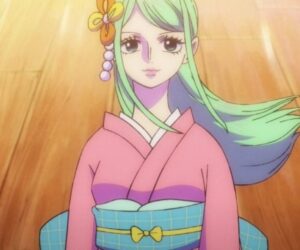 Kozuki Toki first appeared in One Piece Chapter 919, where she explained that she came from the past with her fruit’s ability Toki Toki no Mi. She was so beautiful that Oden fell in love with her at first sight. She was a tall woman with a fair complexion, light green hair, and green eyes.

Along with beauty, she was also a supportive woman and a perfect partner. Also, when everything collapsed, she was the one who saved everyone’s lives by teleporting them 20 years in the future. 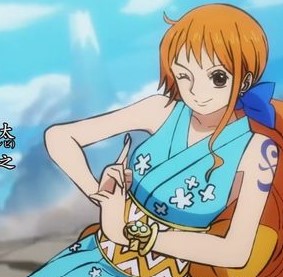 Nami is one of the most beautiful female characters in Wano and the whole One Piece series. She is a member of Straw Hat Pirates. Nami and Robin are the only female characters who wear the best outfits every time.

In the Wano arc, Kinemon provided her kunoichi outfit that enhances her beauty, making fans fall for her. Along with beauty, she is also one of the well-liked characters in One Piece, according to various polls. 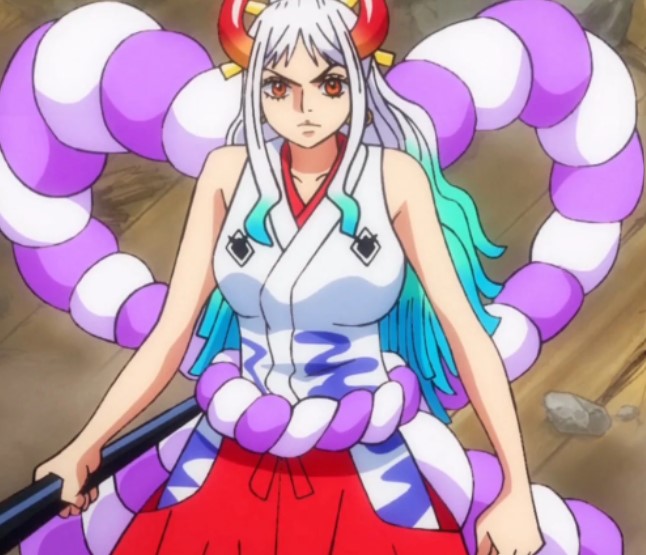 Yamato is another beautiful female character who was first introduced in the Wano arc. She is Kaido’s daughter. Currently, Yamato is 28 years old woman with a slim body and a height of 2.6 meters. She has long white hair with aqua green, and blue fades at the end. 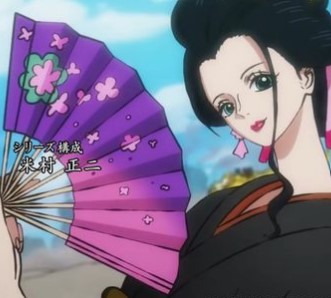 Now is the time for everyone’s favorite, Robin. Nico Robin is 30 years old woman with black hair, tall height, and a fair complexion. Undoubtedly, she has become one of the most beautiful One Piece female characters in the Wano arc.

She ate Hana Hana no Mi, which allows her to bloom her body parts from anywhere. Like Nami, she always wears outstanding outfits that enhance her beauty. Here, we have placed Nami above Robin because she is older than Name and always behaves like a mature woman. 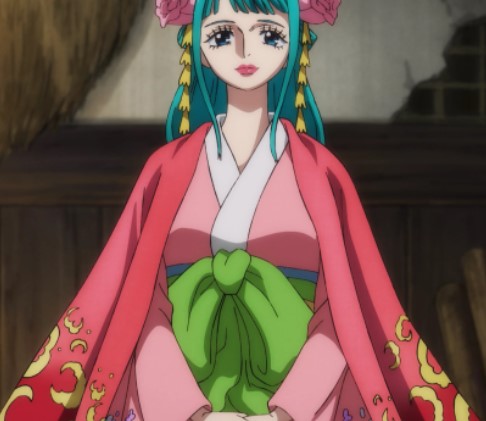 The most beautiful female in the Wano Kuni is Kozuki Hiyori or Komurasaki. Her physical attributes are the same as Toki, her mother. She is an average height woman with turquoise green hair and blue eyes. She is currently 26 years old and has become the highest-ranked Oiran in the Wano.

During the final battle, she took her revenge by unveiling her real identity to Orochi. Along with her beauty, she has a great musical skills to attract anyone.

Here, we conclude our article on “Top 10+ Most Beautiful One Piece Wano Female Characters.” We hope you like this ranking as everyone has their own liking. We will be back with another post. Till then, stay tuned with us and read the articles below.