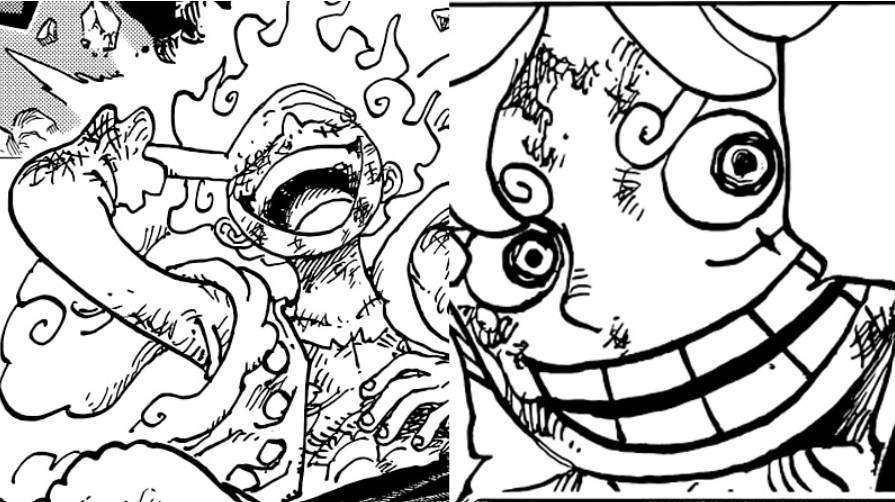 The transformation that the entire fandom had been waiting for is finally here: Luffy has, at last, awakened the powers of his devil fruit. It was shown in manga chapter 1045, where Luffy could use his powers to turn his surroundings into rubber, and there was a tremendous change in his abilities.

It has been confirmed ever since that Luffy’s devil fruit is the Hito Hito No Mi: Model Nika, wherein gear 5, Luffy gains the powers of sun god Nika. Therefore, in this post, we will discuss the powers that Luffy inherits from the sun god in greater detail and the other mythical zoan fruit of similar models; so, stick on till the end.

Must Read: Top 15 Strongest One Piece Wano Characters Ranked (By End of Battle)

Since Luffy has awakened the powers of the Sun God Nika, it is only fitting to discuss Luffy’s abilities in the context of the sun god.

At the end of chapter 1043, Luffy is found utterly defeated by Kaido and melting into a puddle. However, that seems to symbolize Luffy’s transformation into one of the strongest awakenings in the history of One Piece.

When Luffy shifts to Gear 5, his body undergoes some notable changes. His hair no longer remains black but turns into a fiery golden state to symbolize the powers of the sun god that Luffy is inheriting. Luffy’s eyebrows get excessively curly, like Sanji, and he gains greater flexibility and durability.

Since most of Luffy’s gear transformations are based on changes in the heart, this one is no different. In Geat 4, Luffy achieved that state by pumping more blood into his heart. Since his heart was made of rubber, it could take it. In the case of Gear 5 transformations, Luffy’s heart beats in a rhythmic pattern.

Zunesha called these the ‘beats of liberation.’ While in his Gear 5 states, Luffy adopts specific characteristics of Joyboy and the Sun God, such as uncontrollable laughter during battle or having a more fabulous god complex.

Luffy has finally got another level of transformation, and at its primary state, it still appears overpowered. It is because this is probably the final addition to Luffy’s arsenal. The World Government officials said that Luffy is now bound ‘only by his imagination.’

At its very basic, this transformation appears extremely overpowered. There are speculations and fan theories about what would happen if Luffy infused his Haki abilities with this gear transformation.

Luffy has gained sufficient control over his rubber abilities, and with the awakening of his devil fruit, Luffy can now transform himself and his surroundings into rubber. This makes him extremely strong.

Also, most of the characters appear to take up cartoony shapes in gear five with eyes popping out and welts. Luffy has a severe increase in durability since he survived a direct hit of Kaido’s blast breath and went on fighting after Kaido hit him directly on his face with the Kanabo.

Human-Human Fruit Users in One Piece-

All Gods in One Piece (Skypiea Arc Theory)

And after looking at Luffy’s devil fruit, i.e., Human Human Fruit Mythical Zoan Model Nika, it seems that there must be other god zoan devil fruit as well in this world. So, below we have listed the common theory of the other zoan god devil fruit user.

Well, Luffy has now finally been consolidated as the Sun God Nika. The Skypiea arc had hinted at three other major godlike characters, although nothing consolidated has been stated so far.

However, Luffy being confirmed as the Sun god Nika means that Oda sensei has opened up a new avenue to establish a more powerful generation of devil fruit users.

The exact nature of Monkey D. Dragon’s fruit is still under speculation. As Luffy’s father and the leader of the revolutionary army, he is definitely one of the strongest characters in the series.

Although Monkey D. Dragon is widely suspected of having a storm fruit or wind (logia type), a man of his power and abilities wonders if he would really be satisfied with a common fruit. With the recent speculations, the fans often wonder if Dragon’s real fruit is the Rain God fruit.

If that is really the case, Luffy will have yet another ally who quite easily can reach the power of legendary Yonko like Whitebeard.

Oda Sensei has kept the audience in suspense for quite a long time with Admiral Ryokugyu. No one really knows any specific details about this man, and even his real name is not known. He has so far only been shown in the form of a silhouette and as a highly laid-back man who takes justice very seriously.

However, many fans have speculated that Ryokugyu has eaten the forest god fruit due to his fasting. Despite not having eaten anything for the past three years, he is still highly agile and competent. This has led fans to speculate that he derives his nutrition from other sources.

If Ryokugyu is indeed the holder of Earth God power, he is a deadly weapon in the hands of the World Government.

If the five elders of the World Government bow down before someone, that character undoubtedly is one of the strongest, and by quite a margin. IMU is supposed to be the present occupant of the Empty Throne and the singular sovereign, most powerful authority figure in the world.

A fan theory speculates that the Red Line is actually a creation of the World Government. If that is the case, then IMU supposedly has the Earth God fruit power and probably created the red LIne.

The introduction of these new, more powerful god-level users puts Luffy now on a pedestal, and if Luffy is able to harness the power of the Nika properly, he will be a real threat to the World Government.

Most of these other gods are part of a fan theory, and nothing consolidated has been given so far. One Piece Manga is available on VIZ. The anime is available on Crunchyroll and Funimation, with new episodes released every Sunday. And if you are looking for similar articles, keep following us.