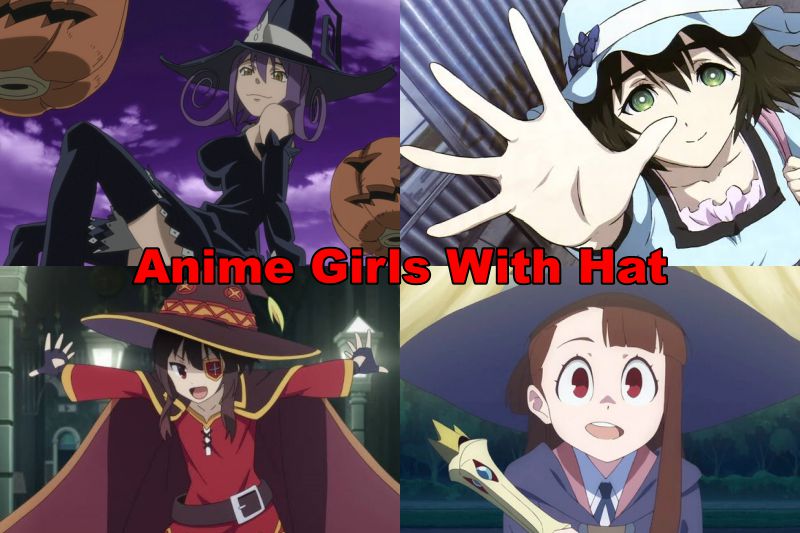 If you love hats and want to see more anime characters in them, then this article is for you! In this article, we have compiled a list of 15 beautiful anime girls with hat!

Outfits, character designs and facial features are the defining characteristics of an anime character. One such article on clothing is the hat!

In the anime world, hats are clearly underutilized, and for a reason! A bad hat immediately makes a good outfit worse. When choosing hats, it’s important to pick one that frames the face and enhances the beauty of the wearer.

Finally, let’s proceed with the list of 15 beautiful anime girls with a hat! 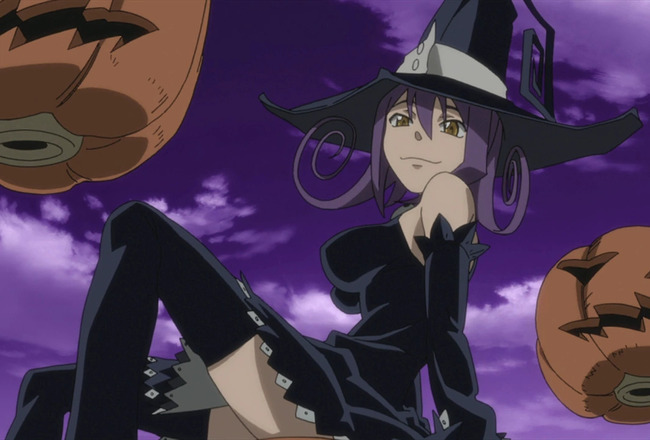 Although she regularly dons a witch’s hat, Blair is not just a witch; she’s a magical cat witch! She can transform into her cat form as he likes. However, in her human form, Blair is a very beautiful woman with an appealing figure. Her witch’s hat hides two purple cat-like ears.

Her signature witch outfit consists of a blue-black dress with white frills in the bottom and open sleeves. The thigh-high boots which she pairs with her striking hat are a beautiful complement to her outfit. With her kind and helpful nature, she makes it difficult for us to resist her charm!

Esdeath of the Akame ga Kill series is a high-ranking general of the Empire. She dons a hat as part of her uniform as a general. She is rather aggressive and manipulative and loves to fight strong opponents whom she respects. No moral quandary befalls her, nor does she have any issues with killing off innocent people.

In short, she is a cut-throat woman who would do whatever it takes to get what she wants. She is aware of her beauty and attractiveness and uses it to her advantage. Who here doesn’t love a hot villain? 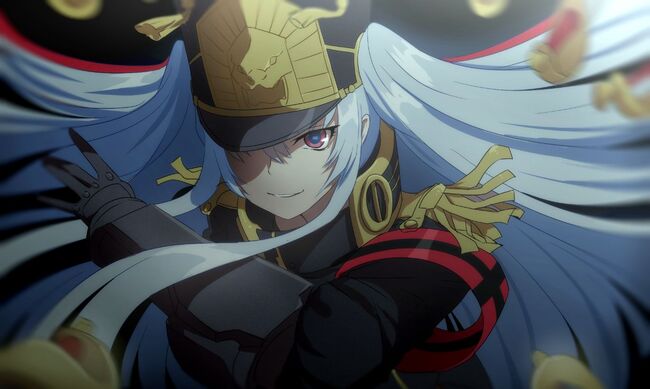 As the primary antagonist, Altair is one of the strongest characters in the RE:Creators series. She is the ultimate creation of Setsuna Shimazaki.

Initially, she was just a mysterious girl in a military outfit and a large matching hat. She has the power to cross between the real world and the fictional world. She brings fictional characters to the real world in order to ultimately destroy both worlds! Her telekinetic and flying abilities make her even cooler! 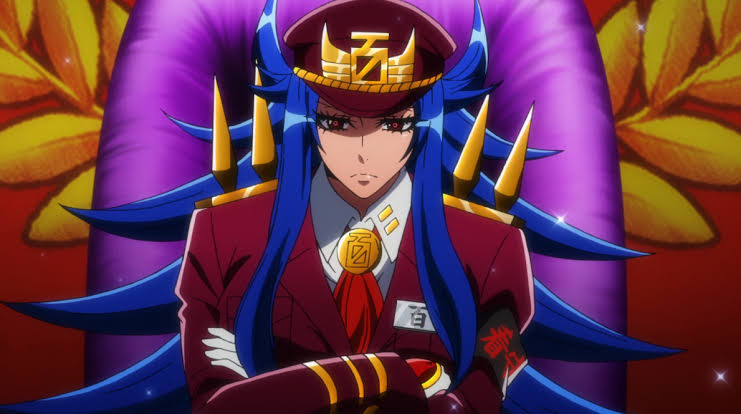 Momoko is one of the supporting characters in the series. As the warden of the Nanba prison who is very committed to her duties and responsibilities, she can be quite intimidating and frightening.

Momoko is a beautiful peach-skinned woman with long, spiky blue hair, red eyes and a voluptuous figure. As part of her warden uniform, she wears a hat with a gold adornment. As serious and stern as she can be, she is just as shy when she’s around her crush. 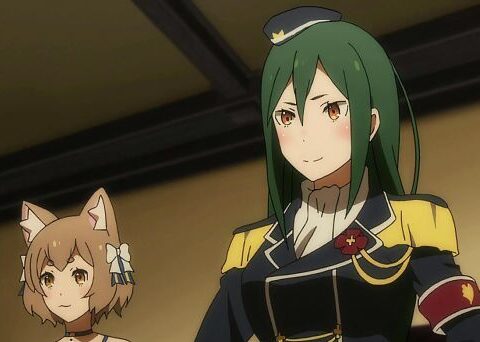 Crusch is one of the major characters in the Re: Zero franchise. She is an incredibly beautiful woman with long green hair, amber eyes and a very appealing figure. She prefers to wear masculine clothing, befitting her position and status as a strong leader.

Her blue military uniform with a matching overcoat is paired with a small tiny military hat too. As a strong, formidable foe with a serious attitude, Crusch can be misunderstood as a cold person. On the contrary, she’s a kind and caring person. 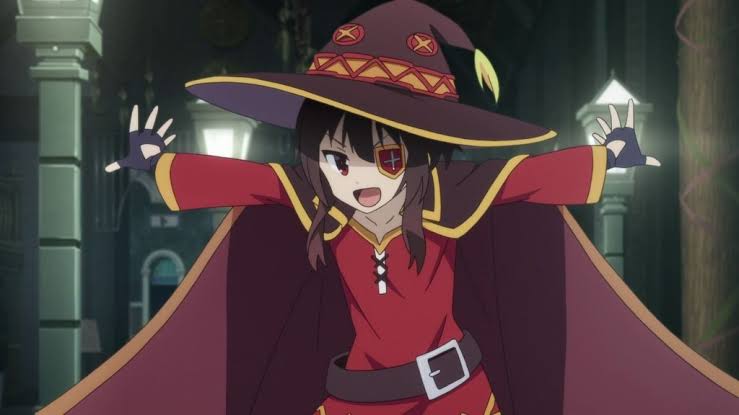 No list of beautiful anime girls with hat can be complete without mentioning Megumin! The Arch Wizard of the Crimson Magic Clan, Megumin, is one of the main characters in the series.

She’s a young girl with short brown hair, fair skin and doll-like features. Her wizard hat and cloak, paired with a black staff, fingerless gloves, and a black choker, look incredible on her! She’s simply magnificent!

She’s arrogant and cocky at times but immediately drops it to save herself in a desperate situation. Despite her flair for dramatics and her childish attitude, it’s quite impossible not to be amused by her personality! 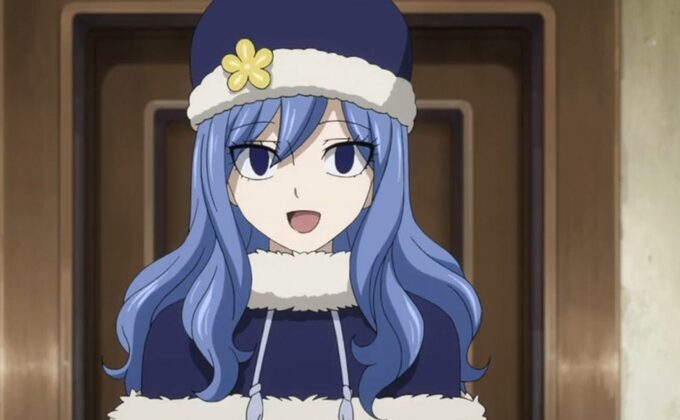 Juvia is a supporting protagonist of the Fairy Tail series. She is a beautiful young girl and a member of the Fairy Tail Guild. Usually seen in a navy blue coat, a shawl with a brown belt and thigh-high boots, her outfit complements her appealing figure. She also wears a Russian Cossack hat.

Before joining the guild, she was alone and secluded from everyone else. Later, she becomes happier and begins to care about its members. 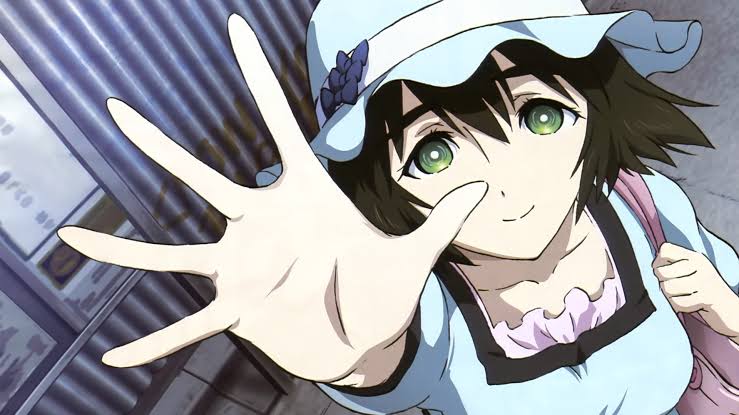 One of the main characters of Steins;Gate, Mayuri Shiina or Mayushii, is an extremely childish girl for her age. She’s pretty short, with black hair and beautiful light-blue eyes. Her outfit fits her child-like tastes: simple and comfortable-looking.

She wears a light blue one-piece dress with black leggings underneath and a light-blue hat. She is very sweet, kind-hearted and perceptive of her surroundings. Understanding the emotions and feelings of the people around her is her forte! 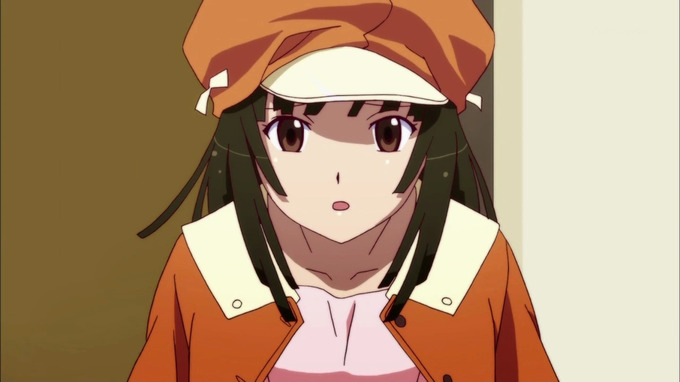 Nadeko of the Bakemonogatari series is a shy girl and has a child-like tendency to refer to herself in the first person.

As a victim of a powerful curse, she has multiple scars on her body that resemble snake scales. To cover up her scars, she wears a pink blouse under an orange jacket with a pair of baggy denim. Her orange newsboy cap resembles a snake’s head and represents the snake that cursed her. 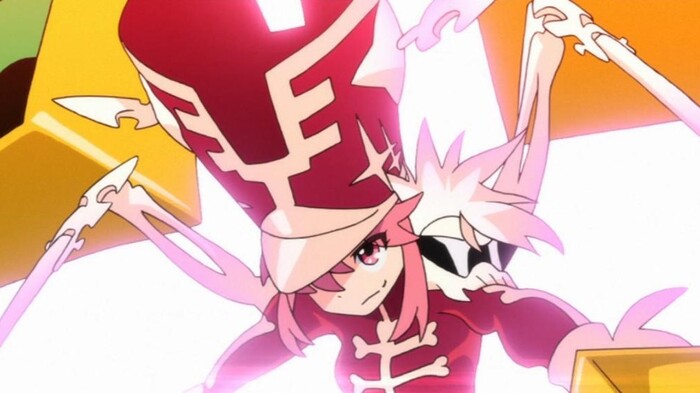 Nonon is one of the main characters of the Kill la Kill series. As part of the School Council’s Elite Four, she has a variety of powers and abilities at her disposal.

As a short, petite girl, she found it best to wear a giant skull-marked hat that would command everyone’s attention and respect. She puts a very believable sweet façade for a girl as sarcastic as her. Her boastful and snide remarks make her very entertaining to watch! 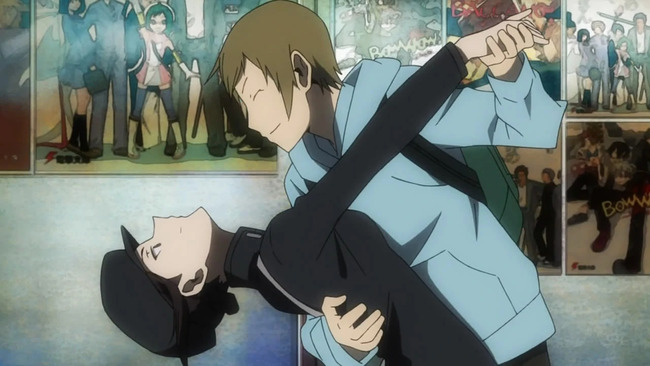 Erika, a supporting character in the series and a member of the online group Dollars, is a beautiful woman. She is most often seen in a long-sleeved, black Chinese cheongsam with a black newsboy cap and ankle boots.

Obsessed with anime and manga, especially BL, she can be very insistent about other people’s relationships. Her torture skills make her plenty terrifying, but the fact that she conducts her torture sessions based on the victim’s choice of anime reminds us of her truly twisted nature. 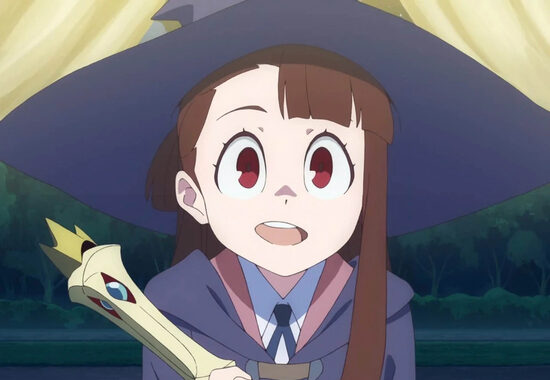 Akko is the main protagonist of the anime series Little Witch Academia.

She’s a beautiful girl with long, chestnut-brown hair and crimson eyes. In her witch academy, Luna Nova, she wears a white, long navy blue hooded tunic with a pointed witch’s hat, stockings and long boots as the school events uniform.

Akko has a warm and cheerful disposition, due to which she’s well-liked by the people around her. She wants to be a talented witch and would do anything to fulfil her dreams! 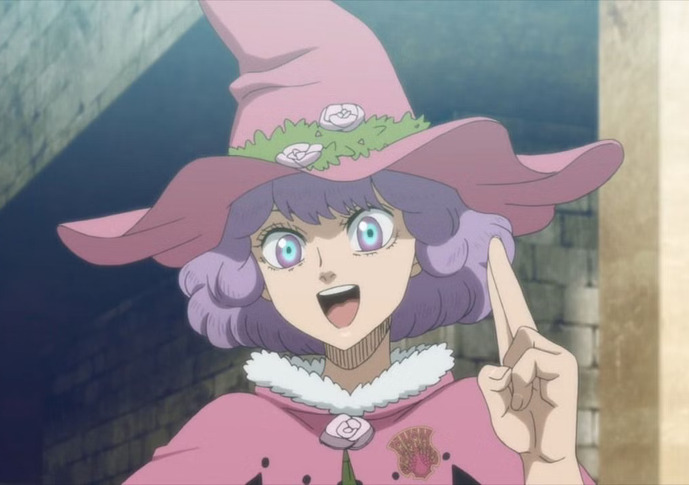 The captain of the Clover Kingdom’s Coral Peacock squad, Dorothy, is a witch of the Witches’ Forest.

She wears a pointed hat with flowers wrapped around its base, as well as a shirt with puffy sleeves and puffy shorts. Her dark-coloured vest hides under her cloak. She is a carefree, playful girl who is asleep more than she’s awake.

One of the cutest anime girls with hat, Patricia ‘Patty’ Thompson from the Soul Eater series, is a Demon Weapon, i.e., a human that can be turned into a weapon. This means she has a Demon Pistol form and a human one.

Her human form has short blonde hair with bangs framing her face. Her most notable outfit includes cowboy apparel with a tight red turtleneck, white tie, cowboy hat and black, high-heel boots. In her other uniform, she replaces her cowboy hat with a hat with floppy ears on its side!

Although she’s a fully grown adult, she still speaks and acts like a child. While her naïve, childlike attitude can be annoying, she’s too cute to be mad at! 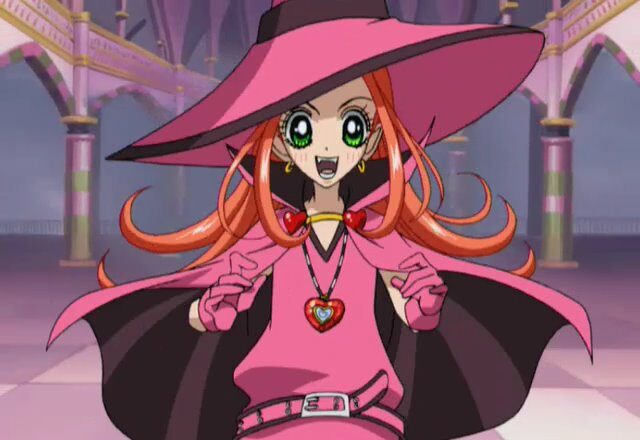 Aspiring for the title “the Future Queen of the Magical World”, Chocolat is an extroverted, energetic and fun-loving girl. She’s the main protagonist of the Sugar Sugar Rune series. In school, she wears her uniform but transforms into her witch costume whenever she wishes to win hearts.

In her witch costume, she dons a pink dress with a brown belt paired with a large pink hat, gloves and a pair of black-and-white striped socks. She’s jealous of Vanilla, who seems to be more popular with the boys due to her somewhat violent personality. But she’s kind and caring to the people she loves!

Hope you enjoyed reading this list of 15 beautiful anime girls with hats!

While some anime girls wear hats as a custom, i.e., in the case of a witch, other anime girls wear them as a uniform. There are plenty of reasons to wear a hat, but no matter the reason, a good hat is a great addition to a character’s outfit and wardrobe!