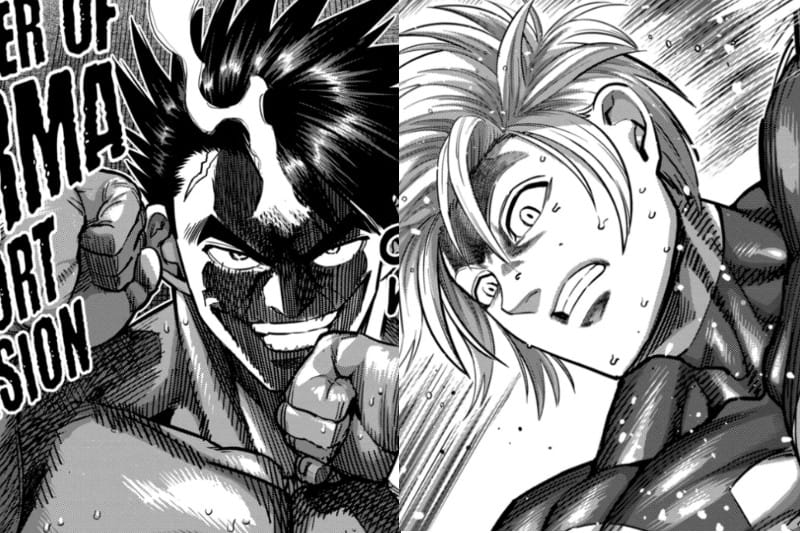 Finally, round 1 of the championship ended with an unexpected result. Kengan Omega Chapter 172 surfaced an exciting fight between Imai Cosmo and Saw Paing, where Saw Paing was the winner in the end. It was an unbelievable fight because, from the beginning, Imai Cosmo had the upper hand.

However, in the end, Saw Paing used his brain and trump card to knock out Cosmo and overcome everyone’s expectations. Both Saw Paing and Imai Cosmo have greatly improved by overcoming their weaknesses after the KAT. So, let’s go through their training and abilities.

The series displayed a glimpse of Cosmo’s training where his teacher, Kureishi Mitsuyo, revealed his weakness, i.e., striking. Compared to Saw Paing, Imai Cosmo has a more petite build and less strength; therefore, he must develop an excellent striking sense with more power. To achieve this, he needs to balance his frame and find the opponent’s “Trigger Point.”

Even Gaolang stated how powerful Cosmo has become. Gaolang noticed that Cosmo first lured Saw Paing into his zone and tried a sacrificial attack to brawl him down on the ground.

That’s why Gaolang considered him unbeatable on the ground. Even when Saw Paing injured his fist, he was thinking about all the brawl techniques that he could proceed with. Some are Armlock, Pound, Front Choke, Guillotine, Elbow, etc. It shows how he is invincible on the ground.

King of Strangles: Imai Cosmo is a practitioner of Brazilian jiu-jitsu who has plenty of brawling or strangling techniques to take down his opponents. Despite being of slight build, his locking and choking techniques are perfect, which makes him one of the great fighters at a very young age. 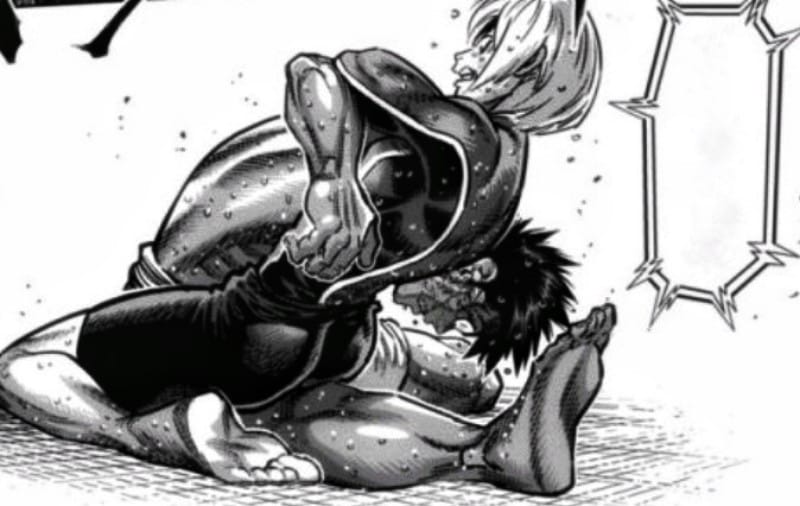 Zone: Imai Cosmo’s unique technique allows his opponent to be wholly focused on their attack within a particular range. Cosmo proceeds into the opponent’s blind spot within a 0.1-second interval and puts them into a hold. However, this technique cannot use against an opponent whose reaction time is faster than Cosmo, like Akoya. Still, he managed to take him down with this technique in the end. Also, he used Zone against Saw Paing to put him under his hold.

Foresight: The strongest ability of Imai Cosmo is to predict the next moves of his opponent. He gained this ability after the fight with Akoya. In the Omega series, he has practiced this technique and used it to dodge and hold Saw Paing multiple times.

Saw Paing is one of the most durable fighters in both the Ashura and Omega series. Even Gaolang was not able to strike him down because of his durability. We know that his head is the strongest among all fighters, and he practiced his head attack, i.e., Hammer of Burma, multiple times.

The only weakness of Saw Paing is not using his brain in the fight. All he does is Strike and win. And sometimes opponents like Rei used this opportunity to win over him.

As justified by Gaolang, if Saw Paing becomes sensible in fighting, then he will become one of the strongest fighters. So, all he did was increase his durability and sense of fighting during his training.

Before Berserk Bowl Championship, we witnessed that he even defeated Sekibayashi Jun in a one-on-one fight. Presently, he has a higher chance of winning the Berserk Bowl tournament after defeating Imai Cosmo.

Lethwei: Saw Paing is the practitioner of Lethwei, which is similar to Muay Thai. It leads him to use every part of his body, including his head, to train and fight. In the previous championship, he attained the second position because he lost against Gaolang in the finals. But Gaolang was impossible to knock him down, and he won just by a point lead. It means if he must fight with him in the matches KAT, then it will be nearly impossible for him to win against Saw Paing.

Dense Bones and Structures: In Lethwei, the fracture is the common part. Hence by fracturing and healing his bones multiple times, Saw Paing’s overall bone structure has become so much dense and near indestructible that he can withstand any powerful blows without any fear of fractures. 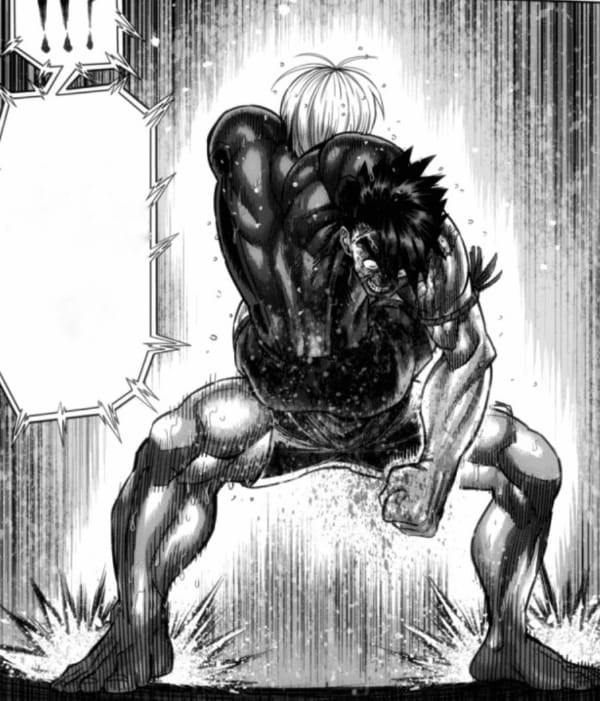 Hammer of Burma: Saw Paing’s strongest attack is Hammer of Burma. Among all his body parts, his head is the strongest. Even Gaolang stated his skull is the “strongest skull of humanity.” And Saw Paing used his as both offensive and defensive. In the championship, he used Hammer of Burma short range as the defensive shield against Imai Cosmo to break his fist, and the second time he used it against the floor to create pressure to release from Imai’s choke.

Must Read: Top 10 Strongest Fighters in Kengan Omega (and Ashura)

Indeed, based on techniques, Imai Cosmo is far better than Saw Paing, but if we compare them based on durability and strength, Saw Paing has the upper hand. The fight began with the blows where Saw Paing thought that Imai Cosmo was planning to take him down to the ground. So, he ignored the short-range fights.

However, Imai Cosmo trained on his blows and was capable of fighting with him in long-range fights with the use of his foresight. However, Saw Paing used a strategy and changed the trajectory of his swing. It was unexpected, but Imai Cosmo replied with a powerful elbow strike on his head.

The elbow cut didn’t give Saw Paing much damage, but the blood coming from his head blocked his vision. Imai Cosmo took advantage of this situation and brawled him down.

He continuously hit his trigger points that do a lot of damage to Saw Paing. The fight was about to be over in Cosmo’s favor, but Saw Paing used his Head of Burma to damage his fist.

After that, Cosmo was left with only one option, i.e., to choke him. So, he began with an arm hold; however, due to sweat, Saw Paing let him out from his grip, but Cosmo Imai followed on with a neck choke hold.

When it was about to end the fight, Saw Paing used his Head of Burma on the ground with all his combined energy to use the recoil to break out of the Chokehold. 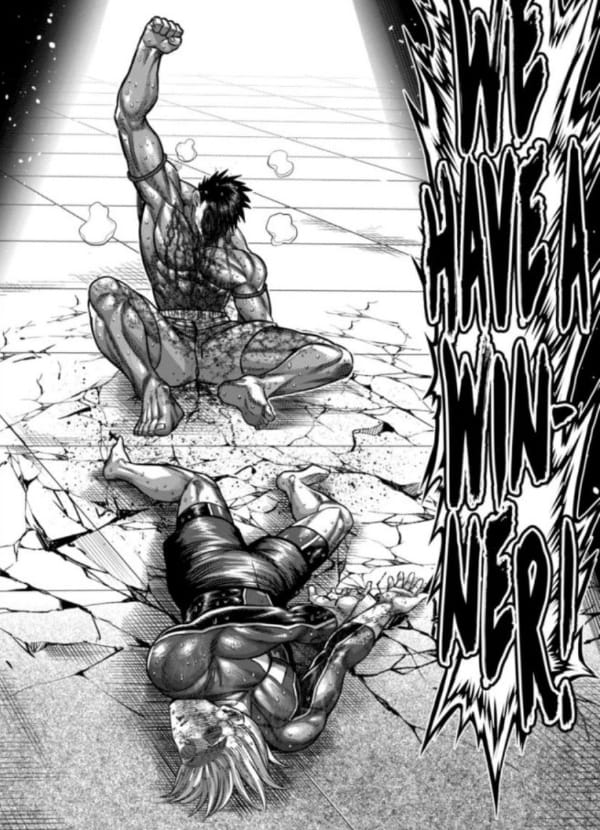 It was really a deadly move because it could even knock him out. And after that, he landed a powerful kick on Cosmo Imai which led him to a complete knockout. In this way, Saw Paing showed everyone that he was stronger than Imai Cosmo and won his first fight in the championship.

Fans can read the full fight on Kengan Omega Chapter 171 and 172. We will be back with another interesting article. Till then stay tuned with us and read the related posts mentioned below.