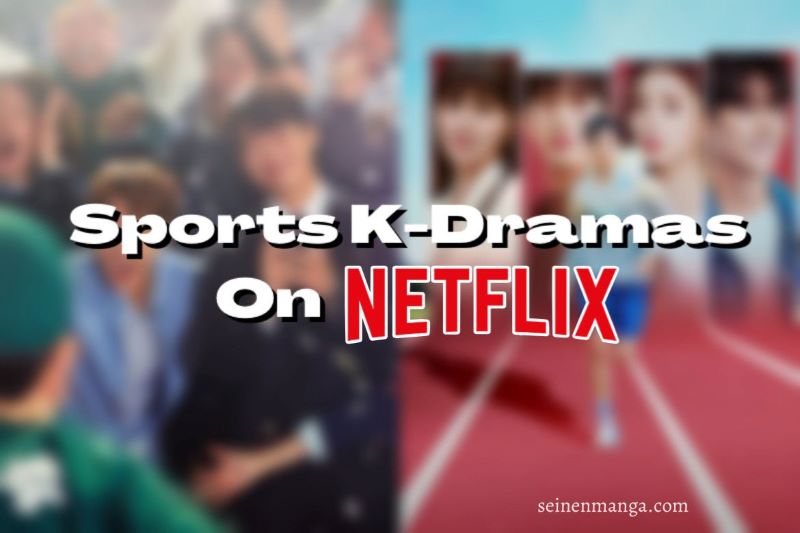 From horror to comedy, romance to thrillers–Korean Dramas have something for everyone. Lately, the one genre trending the most in K-Dramas is Sports. Unsurprisingly, there are several k-dramas made in that genre, we are here to help you choose where you can start.

With that, here are the Top 8 Sports K-Dramas on Netflix based on IMDb Ratings.

Yoon’s wife, Ra Yeong-ja, on the other hand, is the coach for a girls’ middle school badminton team in Haenam with two of the best players in Korea.

Taking us through the journey of these teenage girls and boys with big dreams, we watch them work hard at not only being good badminton players but also evolving into better individuals. Despite the low rating, Racket Boys is a highly recommended sports k-drama for viewers.

Growing up privileged, Ki Seon-gyeom is a former national track star who views the world through rose-colored glasses.

Whereas, Oh Mi-joo, an orphan who has worked hard for everything she has, knows the harsh reality of the world. So, what happens when two polar opposite people meet? Simple. They fall in love.

Following through the lives of our main characters, we see both of them navigating through life and finding a place where they belong. Run On is perfect for a light watch and is sure to make your heart flutter.

Once known for her beauty, Kang Joo-eun, now at 33, is more career-focused and does not pay attention to her own physical well-being.

After being dumped by her long-term boyfriend, Joo-eun is firm with her decision to get healthy again and ends up blackmailing personal trainer Kim Young-ho aka John Kim, to help her get in shape again.

The drama shows how society can be quick to judge and discriminate against people based on how they look.

However, at the same time, it rightfully sends a message to the viewers that personal fitness is important, not only for looking better physically but also for living a healthy and long life.

Ko Dong-man, once a taekwondo player, is now a nameless mixed martial arts fighter who wants to win the UFC Championship.

His childhood best friend, Choi Ae-ra, works as a department store employee and dreams of becoming an announcer one day. As the duo struggles through life to make it big in their specific careers, will it get only messier when their feelings come into the mix?

Fight for My Way is a slice-of-life k-drama that will make you laugh until your stomach hurts but will also make you realize how difficult it truly is to make your dreams come true. Widely praised for its realistic plot, it is a must-watch for everyone.

Considered the worst baseball team in the league for four consecutive years, Dreams suddenly gets a new general manager after their old one steps down.

Baek Seung-soo is perfect for this job as he has maintained several championship-winning sports teams before, but there is one little problem – he has zero knowledge about managing a baseball team.

With the help of operations manager Lee Se-young, they are fixated on making Dreams one of the best in the league, but nothing comes easy. Stove League is one of the most recommended sports k-dramas and will keep you on the edge of your seat till the end.

Extroverted and strong-willed, Kim Bok-joo is an absolute pro at weightlifting. Spending all her life honing her skills, she finds herself experiencing her first love when she meets Jung Jae-yi.

Her crush’s younger brother Jung Joon-hyung decides to help her out but soon finds himself falling for Bok-joo instead.

This coming-of-age sports k-drama is absolutely perfect for the viewers as it has a romance that will make you swoon, a comedy that will make you laugh until you drop, friendships stronger than ever, and the display of hardships the college athletes go through and how they tackle it.

Unfairly sentenced to one year of jail time just days before joining Boston Red Sox, Kim Je-hyuk turns into a convict overnight for defending his sister from a s*xual assault.

There, he meets his childhood best friend and fellow baseball player, Lee Joon-ho, who is now working as an elite prison guard.

Prison Playbook shows us the lives of the convicts at the correctional facility, as well Kim Je-hyuk’s time in there and his hopes and aspirations for his baseball career after his release.

The drama can be considered lighthearted due to its hilarious scenes, but it also doesn’t fail to tear you up after hearing each of the prisoners’ personal struggles and stories.

When Kim Min-chae quits ballet and runs away to her grandmother’s house, she finds her mother, Na Hee-do’s diary from several years ago.

The story then takes us back to 1998 during the IMF crisis, and we are introduced to a younger Na Hee-do, who is a fencing prodigy, and Baek Yi-jin, who is struggling to make ends meet due to the crisis.

This drama takes us on a ride full of laughter, struggles, and experiencing young love. While the ending is bittersweet and not perfect like we usually hope for, it just shows the reality of life and how despite all hardships, we must learn to look forward and carry on with our heads high.

With that, we conclude our list of Top 8 Sports K-Dramas on Netflix and whether you play sports or just like watching them, we are sure the above-mentioned dramas are going to be the perfect place for you to start. For more articles like this, stay tuned. Until next time then!