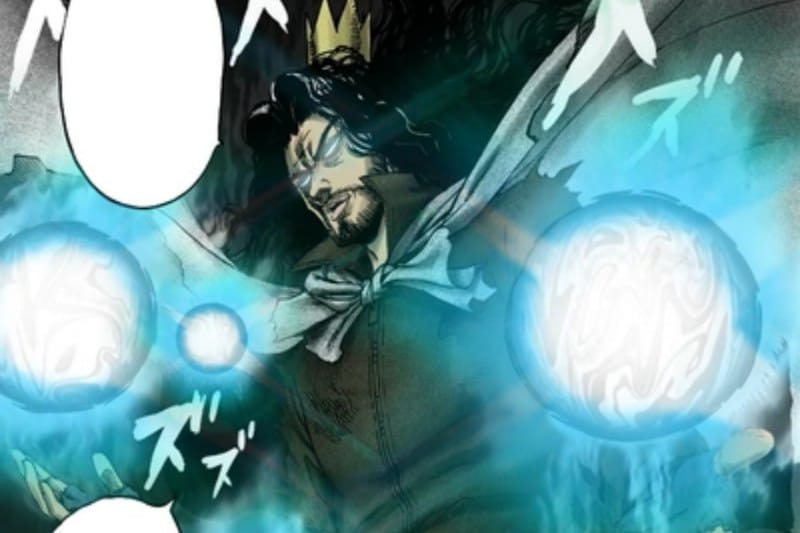 One Punch Man is an ongoing superhero franchise that revolves around the titular character, Saitama – The One Punch Man, who can defeat anyone with a single punch. This makes him the strongest individual in that universe. Being the strongest has made Saitama’s life monotonous and boring; therefore, he seeks worthy opponents that can give him some thrill.

The world set forth by One Punch Man consists of heroes and villains, both having their own unions – Heroes Association and Monsters Association.

Homeless Emperor is one of the main antagonists in the manga, and he is one of the Executive members of the Monsters Association. He is a Dragon-level Mysterious Being who was initially a regular human but, due to several bitter circumstances, garnered hatred towards human beings and the modern world.

History of Homeless Emperor in One Punch Man-

Homeless Emperor was a regular human-turned-Dragon-level Mysterious Being. He used to work in a company until he was publicly humiliated by his boss, where he was forced to walk around naked during a party and later got fired from his post.

Homeless Emperor was later thrown out of his house by his landlord and became a vagabond. He isolated himself from the world and lived in a park.

He had become bitter and developed an intense hatred towards mankind and, after a lot of thinking, obtained a new perspective on life; how small and insignificant he was compared to the whole world. He also came to the realization that humans are disastrous individuals who are infecting and destroying nature.

He then attempted to kill himself to become one with nature and not be a part of the artificial world. Before he could do the deed, an entity named “God” appeared before him, explaining to him how he understood the Homeless Emperor’s hatred and felt the same about humanity. “God” further granted him powers and told him that he did not need to die. Using his newfound powers, Homeless Emperor sought to exterminate the whole of humankind, and that has been his objective ever since.

Power of Homeless Emperor in One Punch Man-

Homeless Emperor is a Dragon-level being and is one of the most influential members of the Monsters Association. His ability – Energy Projection enables him to generate balls of energy and utilize them for combat. His powers are similar to that of Vaccine Man.

He has a good hold over his power and utilizes it well for offensive attacks. However, his body is that of a regular human being, so he does not prefer close-range combat. He primarily engages in mid-range to long-range battles.

In the Monsters Association Arc, he was assigned to fight Zombieman, an S-class Hero. During their battle, there were instances where he dominated over Zombieman, hitting him with so many energy spheres that Zombieman could not regenerate. Homeless Emperor is also seen fighting other S-class heroes like Child Emperor and Tatsumaki.

Homeless Emperor saw the battle with the Heroes Association as a competition. This is evident when he refuses to help Black Sperm in peril. He claimed that it was a competition to see who could take out most of the S-class heroes.

He further establishes absolute dominance over heroes, Iaian and Spring Mustachi0, where he bombarded them with energy spheres. This made it difficult for them to defend against his attacks. He was later intercepted by Atomic Samurai, who slashed his energy spheres using his Sun Blade, which surprised the Homeless Emperor.

Abilities of Homeless Emperor in One Punch Man-

Homeless Emperor can generate and control an infinite amount of energy spheres that explode once it comes in contact with his target. These spheres are incredibly destructive in nature and are part of an all-out offensive attack by Homeless Emperor. Homeless Emperor can increase the size and damage level of these spheres, making him a formidable opponent. He was able to channel his energy into a stream, as seen in his fight with Zombieman.

Thanks to his power, he has enhanced speed and can react quickly when attacked, as seen in his battle with Zombieman. He was able to dodge a point-blank bullet fired by Zombieman using one of his energy spheres. However, his speed and reflexes are not as fast as Atomic Samurai, Bang, or Flashy Flash; still, he is powerful enough to counter an S-Class hero.

This technique of Homeless Emperor enables him to control the trajectory of his energy spheres. He can control the orbit of the energy spheres in such a way that he can make them chae his targets until the balls reach and bombard the target.

He can streamline his energy orbs into a single line of attack. This ability requires a lot more focus because it requires the Homeless Emperor to direct and pinpoint his attack to a specific target. This attack combined with energy orbit can guarantee a hit to the target

This is another technique by Homeless Emperor which can cause massive destruction. He can generate thousands of energy orbs in the sky and rain them down on his opponents. This can take all his opponents out in a single blow.

Homeless Emperor is one of the most powerful Mysterious Beings with a disastrous threat-level. His hatred towards humanity is what drives him and makes him an intense opponent.

Homeless Emperor met his end during his battle with Zombieman. As he was about to deliver the final blow to Zombieman, he had a vision with “God” standing before him. “God” took away his powers and his life along with it. He then disintegrates right before Zombieman’s eyes.

The artist ONE along with illustrator Yusuke Murata created the popular franchise, One Punch Man. The manga revolves around Saitama, who is strongest person alive and parodies the superhero genre.

The digitalized version of the Weekly Shonen Jump serialized the manga. The manga consists of 23 volumes as of January 2021. The anime adaptation has 2 seasons. You can check out the manga on Viz Media or if you prefer watching, 2 seasons of the anime can be streamed on Netflix and Crunchyroll.

Do small things with great love.